Both U.S. presidential candidates of 2008 cited Hemingway’s For Whom the Bell Tolls (1940) as one of their favorite books. It’s about an American teacher, Robert Jordan, who volunteers to go fight in the Spanish Civil War against Franco’s Fascists. Robert Jordan is wounded in battle and contemplates shooting himself with his submachine gun to end the intense pain, but when the enemy comes into sight, Jordan does his duty and delays the approaching Fascist soldiers so that his own comrades can escape to safety. And then he dies.

John McCain wrote a book in 2002 called Worth Fighting For, a phrase taken from Robert Jordan’s dying monologue. McCain writes about how the character of Robert Jordan has always been dear to him, from boyhood through the time he was a prisoner of war in Vietnam. McCain said about Hemingway’s fictional character: “I knew that if he were in the cell next to mine, he would be stoic, he would be strong, he would be tough, he wouldn’t give up. And Robert would expect me to do the same thing.” During the campaign, Obama told Rolling Stone magazine that For Whom the Bell Tollswas “one of the three books that most inspired him.”

Hemingway committed suicide in 1961, shooting himself in the head with a double-barreled, 12-gauge shotgun, while wearing a robe and pajamas in the foyer of his Blaine County house.

He had a turbulent personal life. He told people that he despised his mother. He had been married four times and involved with many other women. He was often unkind to other writers whom he knew, and wrote vicious portraits of F. Scott Fitzgerald and Gertrude Stein, which were published in his memoir A Moveable Feast.

His memoir was actually published posthumously by his widow, Mary Hemingway, in 1964. She edited extensively the memoir manuscript, patching stuff together from various sources. She included things he’d explicitly stated that he didn’t want published, and excluded other parts of his unfinished memoir manuscript.

This month, July 2009, Scribner is releasing a “restored edition” of Hemingway’s memoir. The new edition is edited by Sean Hemingway, the grandson of Hemingway and his second wife, Pauline, a woman who was much maligned in the edition of the memoir edited by Mary, the fourth wife.

Sean Hemingway is a curator at New York’s Metropolitan Museum of Art, and he has edited other anthologies of Hemingway’s writing. He is including parts of the original manuscript that Mary had cut out, passages that he says show his grandfather’s “remorse and some of the happiness he felt and his very conflicted views he had about the end of his marriage” to Pauline. The new edition, he says, is more inclusive and portrays his grandmother in a more sympathetic manner. Sixteen thousand copies of the new edition of A Moveable Feast are being printed in the first run, and Scribner is also releasing new editions of all of Hemingway’s novels with redesigned covers.

There’s a legend that Ernest Hemingway was once challenged to create a six-word story, and he said, “For sale: baby shoes, never worn.” Inspired by this, an online magazine invited readers to submit their own six-word memoirs, a collection of which was published by Harper Collins in 2008 as Not Quite What I Was Planning: Six-Word Memoirs by Writers Famous and Obscure. Six-word memoirs include: “All I ever wanted was more” and “Moments of transcendence, intervals of yearning” and “They called. I answered. Wrong number.” 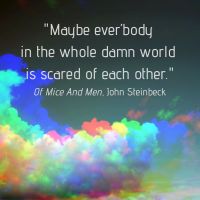