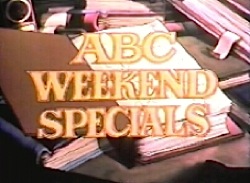 The ABC Weekend Special is a weekly 30-minute anthology TV series for children that aired Saturday mornings on ABC from 1977 to 1997. It featured a wide variety of stories that were both live-action and animated.