Mary Beth Patterson, known by her stage name Beth Ditto (born February 19, 1981, in Searcy, Arkansas), is an American singer-songwriter, most famous for her work with the indie rock band Gossip.

At 13, she moved out of her mother’s house and went to live with her aunt. A resident of Portland, Oregon, she is a close friend of Scissor Sisters lead singer Ana Matronic, and considers her favorite song to be “Oh Bondage, Up Yours” by X-Ray Spex. She courted mild controversy in 2006 when, during an interview for NME magazine, she claimed to have eaten squirrels as a child, saying that “people in Arkansas just do – they’d think you were a freak if you ate squid there!”

Ditto is known for her noticeable stage dances and her unique and revealing image. She also formerly contributed an advice column on body image to The Guardian newspaper.

In February 2009, she was featured in London as the cover model for the premiere of Love magazine with prominent public advertising. On July 9, 2009, Beth’s fashion collection for the UK retailer Evans was released for sale, both online, and in selected stores across the UK.

Ditto, who is a lesbian, is well known for her outspoken support of both LGBT and feminist causes. 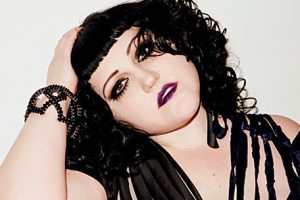