“My Man Godfrey” is on of my favorite movies and part of that reason is because of Carole Lombard.  She is perfection.  Her life story is one of those that even Hollywood couldn’t make up and have people believe it.  Ladies and gentlemen, Carole Lombard.  Style Icon. 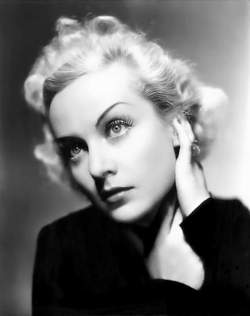 BEST KNOWN FOR: Carole Lombard starred in comedic films during the 1930s. She married actor Clark Gable in 1939, but died in a tragic plane accident a few years later.

Carole Lombard (October 6, 1908 – January 16, 1942) was an American actress. She is particularly noted for her comedic roles in the screwball comedies of the 1930s. She is listed as one of the American Film Institute’s greatest stars of all time and was the highest-paid star in Hollywood in the late 1930s, earning around US $500,000 per year[citation needed] (more than five times the salary of the US President). Lombard’s career was cut short when she died at the age of 33 in a plane crash while returning from a World War II Bond tour.

Queen of the 1930s screwball comedies, she personified the anxiety of a nervous age. Graham Greene praised the “heartbreaking and nostalgic melodies” of her faster-than-thought delivery. “Platinum blonde, with a heart-shaped face, delicate, impish features and a figure made to be swathed in silver lamé, she wriggled expressively through such classics of hysteria as Twentieth Century and My Man Godfrey.”

In 1999, the American Film Institute ranked Lombard 23rd on its list of the 50 greatest American female screen legends. She received one Academy Award for Best Actress nomination, for My Man Godfrey. She has a star on the Hollywood Walk of Fame, at 6930 Hollywood Blvd.

Lombard’s Fort Wayne childhood home has been designated a historic landmark. The city named the nearby bridge over the St. Mary’s River the Carole Lombard Memorial Bridge.