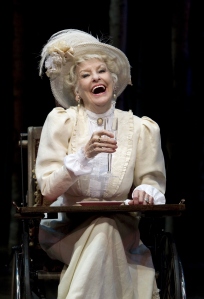 Elaine Stritch (born February 2, 1925) is an American actress and vocalist. She has appeared in numerous stage plays and musicals, feature films, and many television programs. She is known for her performance of “The Ladies Who Lunch” in Stephen Sondheim‘s 1970 musical Company, her 2001 one-woman show, Elaine Stritch at Liberty, and recently for her role as Jack Donaghy‘s mother Colleen on NBC’s 30 Rock. She has been nominated for the Tony Award five times in various categories, and won once, for Elaine Stritch at Liberty.

Stritch made her stage debut in 1944. However, her Broadway debut came in the revue Angel in the Wings in which she performed comedy sketches and the song “Civilization”. Stritch understudied Ethel Merman for Call Me Madam, and, at the same time, appeared in the 1952 revival of Pal Joey, singing “Zip”. Stritch later starred in the national tour of Call Me Madam, and appeared in a supporting role in the original Broadway production of William Inge’s play Bus Stop. She was the lead in Goldilocks.

She starred in Noël Coward‘s Sail Away on Broadway in 1961. Stritch started in the show in a “relatively minor role and was only promoted over the title and given virtually all the best songs when it was reckoned that the leading lady … although excellent, was rather too operatic for a musical comedy.” During out-of-town tryouts in Boston, Coward was “unsure about the dramatic talents” of one of the leads, opera singer Jean Fenn.[10] “They were, after all, engaged for their voices and…it is madness to expect two singers to play subtle ‘Noel Coward’ love scenes with the right values and sing at the same time.”[10] Joe Layton suggested “What would happen if … we just eliminated [Fenn’s] role and gave everything to Stritch? … The show was very old-fashioned, and the thing that was working was Elaine Stritch … every time she went on stage [she]was a sensation. The reconstructed ‘Sail Away’ … opened in New York on 3 October.”

Stritch became known as a singer with a brassy, powerful voice, most notably originating on Broadway the role of Joanne in Company (1970). After over a decade of successful runs in shows in New York, Stritch moved in 1972 to London, where she starred in the West End production of Company.

Stritch has been performing a cabaret act at the Cafe Carlyle in New York City since 2005 (she is a resident of the Carlyle Hotel). Her first show at the Carlyle was titled “At Home at the Carlyle”. The New York Times reviewer wrote:

Amazingly, none of the 16 songs she performs have ever been in her repertory, and just as amazingly, you don’t miss signature numbers… [L]etting them go has allowed her to venture into more sensitive emotional territory. Interpreting stark, talk-sing versions of Rodgers and Hart’s “He Was Too Good to Me”, “Fifty Percent” from the musical Ballroom, and Kurt Weill and Ogden Nash’s “That’s Him”, she comes into her own as a dramatic ballad singer.

Between musical numbers, Stritch told stories from the world of stage and screen, tales from her everyday life and personal glimpses of her private tragedies and triumphs. She most recently performed at the Cafe Carlyle in early 2010 and in fall 2011 in At Home at the Carlyle: Elaine Stritch Singin’ Sondheim…One Song at a Time.