Last night, I watched “The Perks of Being a Wallflower” and balled my fucking eyes out.  Audible, nose-running, sobbing, ugly crying.  I spent the morning not being able to shake my melancholy movie hangover and not really wanting to.  Naturally, I am watching it again and have clogged my Kindle up with the book.  It is true, all you need to get through high school is a couple friends that understand you, and a lot of great music. 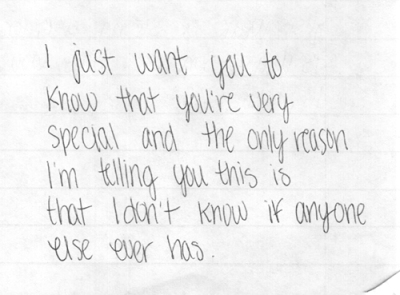 Charlie himself is a mystery.  He has mental problems, gets angry, sees things and then passes out.  Right before he started high school his best friend shot himself, but there is also another, worse reason for his problems…

“So, this is my life. And I want you to know that I am both happy and sad and I’m still trying to figure out how that could be.”

The movie confirms one of my convictions: If you are too popular in high school, you may become so fond of the feeling that you never find out who you really are.  The film is based on Stephen Chbosky‘s best-selling young-adult novel, which was published in 1999 and is now on many shelves next to The Catcher in the Rye.

“Asleep” by the Smiths
“Vapour Trail” by Ride
“Scarborough Fair” by Simon & Garfunkel
“A Whiter Shade of Pale” by Procol Harum
“Dear Prudence” by the Beatles
“Gypsy” by Suzanne Vega
“Nights in White Satin” by the Moody Blues
“Daydream” by Smashing Pumpkins
“Dusk” by Genesis (before Phil Collins was even in the band!)
“MLK” by U2″Blackbird” by the Beatles
“Landslide” by Fleetwood Mac
“Asleep” by the Smiths (again!)

The story, set in the early 1990s, tells the story of Charlie, who begins it as a series of letters to a “friend.”  He enters high school tremulously and without confidence, and is faced on his first day by that great universal freshman crisis: Which table in the lunchroom will they let me sit at?  Discouraged at several tables, he’s welcomed by two smart and sympathetic seniors.
They are Sam and Patrick.  Charlie makes the mistake of assuming they are a couple, and Sam’s laughter corrects him; actually, they’re step-siblings. Charlie is on the edge of outgrowing his depression and dorkdom, and is eerily likable in his closed-off way. One of the key players in his life is the dead aunt he often has imaginary meetings with.

Their crowd is artsy, outsider, non-conformist.  We learn a lot about their high school crowd by finding out they’re instrumental in the local midnight showings of “The Rocky Horror Picture Show.” When Charlie is unexpectedly pressed into service playing a key role one night during their performance, it provides him with a turning point that may be contrived but is certainly entertaining.

Film Soundtrack:
“Could It Be Another Change?” by The Samples
“Come On Eileen” by Dexys Midnight Runners
“Tugboat” by Galaxie 500
“Temptation” by New Order
“Evensong” by The Innocence Mission
“Asleep” by The Smiths
“Low” by Cracker
“Teen Age Riot” by Sonic Youth
“Dear God” by XTC
“Pearly-Dewdrops’ Drops” by Cocteau Twins
“Heroes” by David Bowie

He’s also guided by his English teacher, who steers him toward seminal books including The Catcher in the Rye. Why is it that English, drama and music teachers are most often recalled as our mentors and inspirations? Maybe because artists are rarely members of the popular crowd.

“Standing on the fringes of life… offers a unique perspective. But there comes a time to see what it looks like from the dance floor.”

“I don’t know if you’ve ever felt like that. That you wanted to sleep for a thousand years. Or just not exist. Or just not be aware that you do exist. Or something like that. I think wanting that is very morbid, but I want it when I get like this. That’s why I’m trying not to think. I just want it all to stop spinning.” 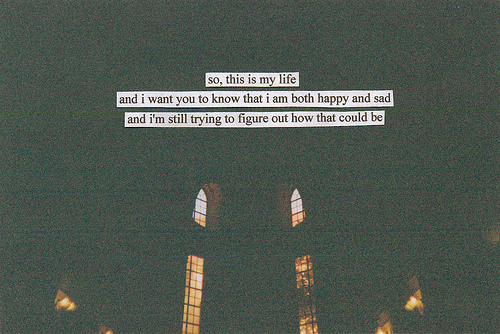