I had quite thought that I would be spending this spring reading Agatha Christie mysteries in order of publication, maybe D.V. again, obviously The Perks of being a Wallflower, and who really knows what else, but it looks like I may need to crank through The Great Gatsby one more time.  Partially because of this letter, and partially due to the release of the movie.  I adore the 1973 adaptation so very much, I do hope that the new one is as gloriously and festively sad.  The book had quite possibly the most perfect last paragraph of a novel that ever has been written.  So much so, it is Scott and Zelda’s epitaph.

July, 1922. In the final paragraph of an otherwise unremarkable letter to his editor, Maxwell Perkins, author F. Scott Fitzgerald passionately announces his desire to begin writing “something extraordinary and beautiful and simple and intricately patterned.”

The novel he had mentioned for the first time was The Great Gatsby. 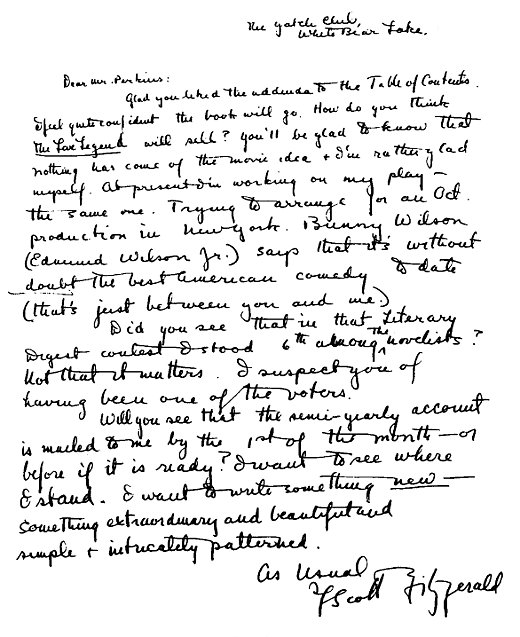 Glad you liked the addenda to the Table of Contents. I feel quite confident the book will go. How do you think The Love Legend will sell? You’ll be glad to know that nothing has come of the movie idea & I’m rather glad myself. At present working on my play — the same one. Trying to arrange for an Oct. production in New York. Bunny Wilson (Edmund Wilson Jr.) says that it’s without doubt the best American comedy to date (that’s just between you and me.)

Did you see that in that Literary Digest contest I stood 6th among the novelists? Not that it matters. I suspect you of having been one of the voters.

Will you see that the semi-yearly account is mailed to me by the 1st of the month — or before if it is ready? I want to see where I stand. I want to write something new — something extraordinary and beautiful and simple & intricately patterned.

via Letters of Note.