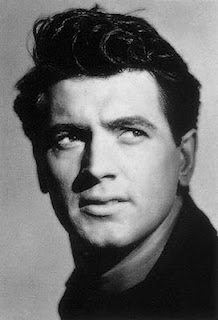 BEST KNOWN FOR: Rock Hudson was a leading man of the Hollywood screen in the 1950s and 1960s. His death from AIDS in 1985 greatly increased awareness of the disease.

Roy Harold Scherer, Jr., later Roy Harold Fitzgerald (November 17, 1925 – October 2, 1985), known professionally as Rock Hudson, was an American film and television actor, most recognized as a romantic leading man during the 1950s and 1960s, most notably in Magnificent Obsession (1954), Giant (1956) and several popular comedies with Doris Day. Later roles included the leads in Ice Station Zebra and the popular televison series McMillan & Wife along with a role in the hugely successful series Dynasty.

Hudson was voted “Star of the Year”, “Favorite Leading Man”, and similar titles by numerous movie magazines. The 6 ft 5 in (1.96 m) tall actor was one of the most popular and well-known movie stars of the time. He completed nearly 70 motion pictures and starred in several television productions during a career that spanned over four decades.

Hudson died in 1985, being the first major celebrity to die from an AIDS-related illness.

Following his death, Elizabeth Taylor, his co-star in the film Giant, purchased a bronze plaque for Hudson on the West Hollywood Memorial Walk.

What You Need To Know

Why He’s a Style Icon

Millions of men would kill for the ability to make women swoon the way Roy Harold Scherer Jr. did on-screen. This actor had the kind of charisma that couldn’t be manufactured. When he changed his name to Rock Hudson, he broke box-office records with his films and TV appearances. But as a child, the actor was never cast for any of the productions that he auditioned for, and he had trouble memorizing his lines. Superstardom didn’t happen overnight. He sent his photos to tons of production companies until he began getting small roles, which led to larger ones. In 1956, he starred in Giant with fellow style icons James Dean and Elizabeth Taylor. His performance got him an Academy Award nod for best actor.

Hudson epitomized classic American style making simple choices with embellished impressions. On-screen, he wooed woman with his manly good looks and suave style. He pre-dated the word “swag” but would have done it justice. The height of Hudson’s career spanned two decades, both of which were probably the most important to menswear. The ’50s and ’60s brought rebels and statement looks, but menswear still catered to the classics. Hudson was no different.

The best thing about Hudson was his effortless style. He used very little in order to create a look — his presence on- and off-screen was the wow factor. Menswear wasn’t complicated or overly thought out. This is what the ’50s and ’60s were about. Consumers and designers both believed in grooming, so clean looks were always in order. This actor knew how to take something as simple as a white linen shirt and pair it with light-blue slacks, an early version of what would probably be referred to as espadrilles, and a basic leather belt to create the perfect everyday outfit. If he looked like he didn’t try that hard, it’s probably because he didn’t.

Rock Hudson’s style wasn’t complicated. From his choices, it’s evident that the actor believed in keeping everything simple and to the point. His perspective was classic and minimalist. That didn’t necessarily mean all white and no patterns, but the actor let embellishments accent his look without overpowering his perspective. When shopping or browsing through your closet, look for basic pieces that can be dressed up and down — nothing too over-the-top. Ermenegildo Zegna’s cotton-stretch pants are great for a simplistic, chic look. These pants (available in white at Bergdorf Goodman) give you that extra room for breathing and the stretch element can conform to the body, making them slim or baggy depending on how they are worn. Grooming should be clean and trimmed. Hudson’s style was more dapper than rugged.