Buy a used copy of this book, read it in public, when you are finished, leave it in a coffee shop.

The sexual content of this play, which later became a popular and critically acclaimed film, raised eyebrows and led to self-censorship when the film was being made. The director left a number of scenes on the cutting room floor to get an adequate rating and protect against complaints of the play’s immorality. 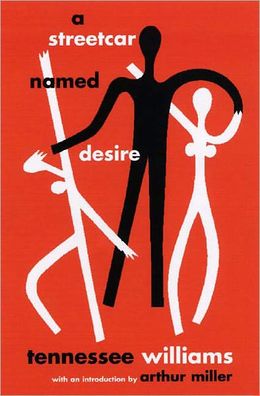 Tennessee Williams was born Thomas Lanier Williams III in Columbus, Mississippi, in 1911. His friends began calling him Tennessee in college, in honor of his Southern accent and his father’s home state. Williams’s father, C.C. Williams, was a traveling salesman and a heavy drinker. Williams’s mother, Edwina, was a Mississippi clergyman’s daughter prone to hysterical attacks. Until Williams was seven, he, his parents, his older sister, Rose, and his younger brother, Dakin, lived with Edwina’s parents in Mississippi.

In 1918, the Williams family moved to St. Louis, marking the start of the family’s deterioration. C.C.’s drinking increased, the family moved sixteen times in ten years, and the young Williams, always shy and fragile, was ostracized and taunted at school. During these years, he and Rose became extremely close. Edwina and Williams’s maternal grandparents also offered the emotional support he required throughout his childhood. Williams loathed his father but grew to appreciate him somewhat after deciding in therapy as an adult that his father had given him his tough survival instinct.

After being bedridden for two years as a child due to severe illness, Williams grew into a withdrawn, effeminate adolescent whose chief solace was writing. At sixteen, Williams won a prize in a national competition that asked for essays answering the question “Can a good wife be a good sport?” His answer was published in Smart Set magazine. The following year, he published a horror story in a magazine called Weird Tales, and the year after that he entered the University of Missouri to study journalism. While in college, he wrote his first plays, which were influenced by members of the southern literary renaissance such as Robert Penn Warren, William Faulkner, Allen Tate, and Thomas Wolfe. Before Williams could receive his degree, however, his father forced him to withdraw from school. Outraged because Williams had failed a required ROTC program course, C.C. Williams made his son go to work at the same shoe company where he himself worked.

After three years at the shoe factory, Williams had a minor nervous breakdown. He then returned to college, this time at Washington University in St. Louis. While he was studying there, a St. Louis theater group produced two of his plays, The Fugitive Kind and Candles to the Sun. Further personal problems led Williams to drop out of Washington University and enroll in the University of Iowa. While he was in Iowa, Rose, who had begun suffering from mental illness later in life, underwent a prefrontal lobotomy (an intensive brain surgery). The event greatly upset Williams, and it left his sister institutionalized for the rest of her life. Despite this trauma, Williams finally managed to graduate in 1938.

In the years following his graduation, Williams lived a bohemian life, working menial jobs and wandering from city to city. He continued to work on drama, however, receiving a Rockefeller grant and studying playwriting at the New School in New York. His literary influences were evolving to include the playwright Anton Chekhov and Williams’s lifelong hero, the poet Hart Crane. He officially changed his name to Tennessee Williams upon the publication of his short story “The Field of Blue Children” in 1939. During the early years of World War II, Williams worked in Hollywood as a scriptwriter and also prepared material for what would become The Glass Menagerie.

Much of the pathos found in Williams’s drama was mined from the playwright’s own life. Alcoholism, depression, thwarted desire, loneliness, and insanity were all part of Williams’s world. His experience as a known homosexual in an era unfriendly to homosexuality also informed his work. Williams’s most memorable characters, many of them female, contain recognizable elements of their author, Edwina, and Rose. His vulgar, irresponsible male characters, such as Stanley Kowalski, were likely modeled on Williams’s own father and other males who tormented Williams during his childhood.

Williams’s early plays also connected with the new American taste for realism that emerged following the Depression and World War II. The characters in A Streetcar Named Desire are trying to rebuild their lives in postwar America: Stanley and Mitch served in the military, while Blanche had affairs with young soldiers based near her home.

Williams set his plays in the South, but the compelling manner in which he rendered his themes made them universal, winning him an international audience and worldwide acclaim. However, most critics agree that the quality of Williams’s work diminished as he grew older. He suffered a long period of depression following the death of his longtime partner, Frank Merlo, in 1963. His popularity during these years also declined due to changed interests in the theater world. During the radical 1960s and 1970s, nostalgia no longer drew crowds, and Williams’s explorations of sexual mores came across as tired and old-fashioned.

Williams died in 1983 when he choked on a medicine-bottle cap in an alcohol-related incident at the Elysée Hotel in New York City. He was one month short of his seventy-second birthday. In his long career he wrote twenty-five full-length plays (five made into movies), five screenplays, over seventy one-act plays, hundreds of short stories, two novels, poetry, and a memoir. The mark he left on the tradition of realism in American drama is indelible.