It was on this day in 1961 that Ernest Hemingway committed suicide in Ketchum, Idaho.

He’d had trouble writing since he’d participated in World War II. After the war was over, he said, “[It’s] as though you had heard so much loud music you couldn’t hear anything played delicately.” He’d been struggling to write a long novel called The Sea Book, but it wasn’t coming together so he was only able to publish a small part of it called The Old Man and the Sea (1952). It got great reviews and won the Pulitzer Prize, but he was frustrated that all he’d been able to produce was a novella.

And then, in 1953, he decided to go on safari in Africa, and he chartered a plane to fly over the countryside. Things went badly right from the start. On the first flight, the hydraulic system of the plane wasn’t working well, and they had to make an emergency landing. Then, when they took off again, they almost collided with a flock of birds and crash landed on the shore of the Nile River. Hemingway sprained his shoulder, and his wife broke several ribs. But still, they climbed into another plane for a third flight, and this one crashed almost as soon as it took off. Hemingway fractured his skull, got a concussion, cracked two discs in his spine, and suffered from internal bleeding.

Because a search team initially failed to find Hemingway’s crashed plane, he was reported dead, and there were obituaries printed around the world. He later said that he strangely enjoyed reading what people said about him when they thought he was gone. He cut out the articles and saved them in two separate scrapbooks bound in zebra and lion skin.

But he never really recovered from the injuries he sustained in that plane crash, and he began to drink more and more as a way to self-medicate. He wrote pages and pages about his experiences in Africa, but published none of it. Then, in 1956, he found a trunk of old manuscripts and notebooks from his early days as a writer in Paris, and those notebooks inspired him to write his memoir A Movable Feast (1964), about the period of his life just before he became famous. Many critics consider it his greatest work of nonfiction.

Almost as soon as he finished it, he began to suffer from insomnia and depression. He was having problems with his eyes, he was losing his hair, and he’d come down with a skin condition. He also became obsessed with the idea that he was under FBI surveillance, and his wife thought he was losing his mind. FBI records would later show that they did in fact have him under surveillance, and they even interviewed his psychiatrist. But he finally decided to check into the Mayo Clinic in Rochester, Minnesota, where he was subjected to electroshock therapy. The treatment did not help his depression, and he hated it. He wrote in a letter, “What is the sense of ruining my head and erasing my memory, which is my capital, and putting me out of business?

Doctors decided to release him on June 26th of that year. He went back to the house where his wife was staying in Ketchum, Idaho. On the morning of July 2, 1961, he got up early, found his favorite shotgun and, in the foyer of the house, shot himself — before his wife had woken up. She later said that the noise that woke her sounded like a drawer slamming shut. 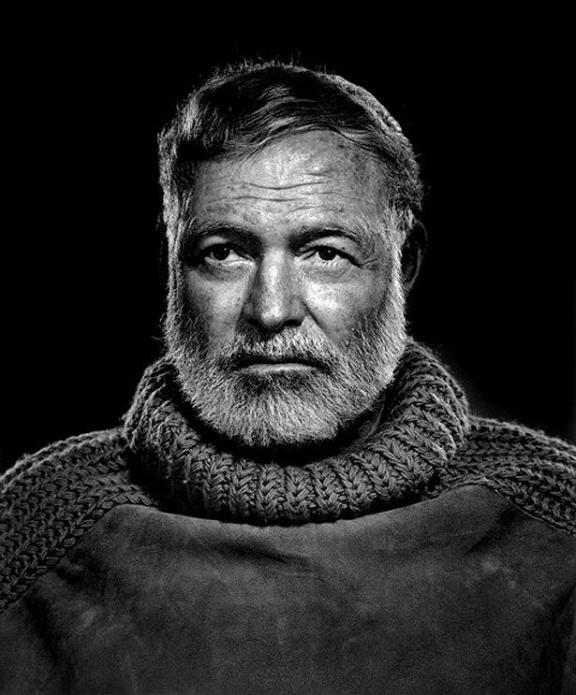