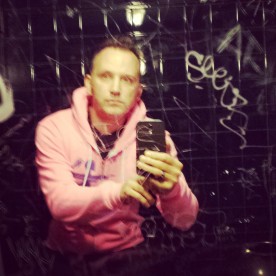 Selfie in Men’s Bathroom at Bauhaus

My Car Does Not Have Cup Holders.

I went to Bauhaus yesterday morning and may go back today.  The original location is closing this weekend because the building is being torn down.  Back when I first moved to Seattle in 1992, I used to go to coffee shops all the time with my friends.  There were options, we would “go have coffee” and no one ever said “I need my Starbucks.”  We went to Bauhaus, Cafe Puss Puss, Rosebud, Cinema Espresso, Penny University, Lux, Sit-n-Spin,  Cyclops, Cafe Septieme, B&O Espresso, Cafe Mauro, Cafe Paradiso, Speakeasy, and that’s just the ones I can remember.  A lot of coffee shops, a lot of coffee, and sadly, I think all of those listed are gone, except Bauhaus.  I say except because even though they are closing, they are reopening up the street at the old Capitol Club mid-October.

Bauhaus was founded in 1993 and is notable for an unusual coffeehouse space design, which founder Joel Radin later applied to the design of Top Pot Doughnuts when he co-founded that company with others.