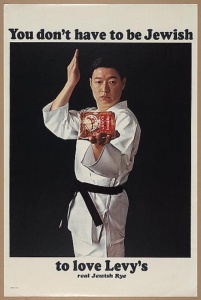 This week Judy Protas, an ad firm copywriter who penned “You don’t have to be Jewish to love Levy’s Real Jewish Rye” died at the age of 91. The Levy’s campaign, conceived by Mr. Bernbach and the art director William Taubin, featured photographs of conspicuously non-Jewish New Yorkers — a black boy, Asian and Native American men and a robed choirboy among them — blissfully contemplating a slice of the company’s rye.

The ads were aimed primarily at the metropolitan area, where, exploiting a singular New York delivery system, they appeared chiefly in the subways. Long part of the day-to-day texture of the city, they were so striking that they drew a national following and were sold individually as posters.

As a result of the ads, sales of Levy’s rye bread soared, and the campaign was admired by people as diverse as the syndicated columnist Walter Winchell, who called it “the commercial with a sensayuma” (say it aloud, fast), and Malcolm X, who liked the poster featuring the black child so much that he had himself photographed alongside it.

Waldina broke the 100,000 hits mark this past week, and for that, I am very grateful and excited. I started this blog as a way to chronicle the people/places/things that I love and and find inspiring. I figured that some people would like some of the content from time to time, but I am very excited that more and more people are supporting the concept. Overall, I do my best to be positive and celebratory since there is so much negativity in everyone’s daily lives. I am just glad that others spend a bit of their days celebrating with me and sharing it with their friends. Thank you so much.

This week, I obsessed over the ABC After School Special “My Dad Lives in a Downtown Hotel”. I reminded everyone about how to use the “reply all” button (just don’t).  I celebrated Evlis and David Bowie’s birthday.  I took to heart the wise words of Elizabeth Taylor.

Over on Wasp & Pear on Tumblr, I reflagged tidbits from Muffy Bolding, TwistedSifter, Beguiling Hollywood, WeHeartIt, LihtBox, and more. I continued my never-ending obsession with abandoned places, Andy Warhol, the Murphys and Ramon Novarro.

In the @TheRealSPA corner of the twitter-verse this week, I tweeted out some of the people/things twitter thinks I should follow: @WildTurkey and @AvrilLavinge. I did not take their advice. I retweeted a beautiful photograph of Venice Beach in 1979.