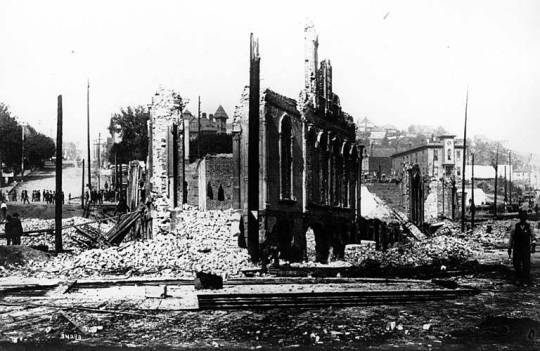 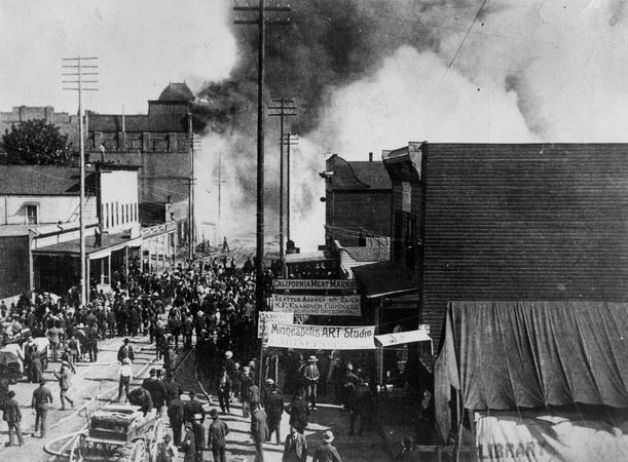 On the afternoon of June 6, 1889, John E. Back, a worker in Victor Clairmont’s cabinet-making shop near Front Street and Madison Avenue, was heating glue over a gasoline fire.  Sometime around 2:30 pm, the glue boiled over and caught fire.  The fire soon spread to the wood chips and turpentine covering the floor.  Back attempted to douse the fire with water which only served to spread the fire further.  The fire department arrived by 2:45, but by that time the area was so smoky that the source of the fire could not be determined.  At first it was assumed to have begun in the paint shop above Clairmont’s woodworking shop and the Seattle newspaper erroneously ran this story the next day.

By the morning of June 7, the fire had burned 25 city blocks, including the entire business district, four of the city’s wharves, and its railroad terminals.  The fire would be called the most destructive fire in the history of Seattle.  Despite the massive destruction of property, the only casualty was a young boy named James Goin.  However, there were fatalities during the cleanup process and over 1 million rodents were killed. Total losses were estimated at nearly $20,000,000 ($656 million in today’s dollars)

Over the next 18 hours, the blaze wiped out the town’s business district and waterfront. Miraculously, there were no human fatalities.  Because of the fire, the streets in downtown Seattle now sit up to 22 feet above the original street levels.

In a year’s time, Seattle had nearly been rebuilt. All the construction jobs sparked a population boom, and Seattle grew from a town of 25,000 into a full-fledged city of more than 40,000.