Today is the 90th birthday of Brett Somers.  It is also Friday, so pour yourself a highball, put on your largest pair of glasses, and laugh uncontrollably.  You have earned it. 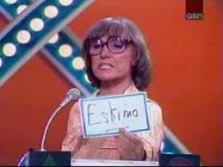 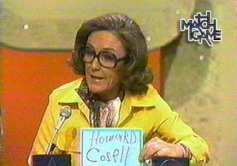 BEST KNOWN FOR: Brett Somers was a TV actress and personality perhaps best known for her appearances on Match Game, the top game show during much of the 1970s.

Actress, singer, and comedienne Brett Somers was born Audrey Johnston on July 11, 1924, in New Brunswick, Canada, and grew up in Portland, Maine. She ran away from home at age 17 and settled in Greenwich Village in New York City. She changed her first name to Brett after the lead female character in the Ernest Hemingway novel The Sun Also Rises. Somers was her mother’s maiden name. She also became a U.S. citizen.

In 1958, Somers made her Broadway debut in a flop play called Maybe Tuesday, which also featured future TV star Alice Ghostley, who played Esmeralda on Bewitched. She was a lifetime member of the Actors Studio and appeared in Happy Ending, The Seven Year Itch and with her husband Jack Klugman in The Country Girl.

Somers made regular appearances in several early television shows including The Philco Television Playhouse, Kraft Television Theatre, Playhouse 90 and Robert Montgomery Presents. In the 1970s, she became well-known for her appearances on the popular game show Match Game. Hosted by Gene Rayburn, contestants would try to match answers to nonsense questions presented by a panel of celebrities including Somers, Fannie Flag, Richard Dawson and Charles Nelson Reilly. Somers quick-witted quips made her a popular celebrity panelist on the show.

After moving to New York, Somers married and had a daughter, Leslie, before divorcing her first husband. In 1953, she married Jack Klugman, the actor who rose to fame as the star of the television shows The Odd Couple and Quincy. They had two sons, Adam and David.

Somers appeared on several episodes of The Odd Couple, playing Blanche Madison, the ex-wife of Klugman’s character, sloppy sports writer Oscar Madison. Klugman also recommended Somers as panelist on Match Game after he appeared on the show during the first week of its run. The couple regularly appeared together on talk shows including The Mike Douglas Show (1961), The Tonight Show (1962), He Said, She Said (1969) and Match Game (1973).

Somers and Klugman separated in 1974, but never divorced.

In the summer of 2003, Somers wrote, co-produced and appeared in a critically acclaimed one-woman cabaret show, An Evening with Brett Somers. She continued to perform after being diagnosed with cancer.

In 2005, Somers reunited with Jack Klugman onstage in Danger, People at Large, three short comedies presented at Fairfield University. It was the first time in three decades that the former couple had performed together.

Although Somers’ cancer had been in remission, it returned in an inoperable form in 2007. Brett Somers died of stomach and colon cancer on September 15, 2007 at her home in Westport, Connecticut.