Charles James (18 July 1906 in Sandhurst – September 23, 1978 in New York City) was a fashion designer known as America’s first couturier. He is considered a master of cutting and is known for his highly structured aesthetic.

His father was a British officer and his mother a Chicago ‘patrician’. In 1919 he attended Harrow School, where he met Evelyn Waugh, Francis Rose and, most importantly Cecil Beaton, with whom he formed a longstanding friendship. He was expelled from Harrow for a ‘sexual escapade’.

At the age of nineteen in 1926, Charles James opens his first hat shop in Chicago, using the name of a schoolfriend, ‘Charles Boucherdon’.

In 1928 he left Chicago for Long Island with 70 cents, a Pierce Arrow and a number of hats as his only possessions. He later opened a hat shop above a garage in Murray Hill, New York, beginning his first dress designs. 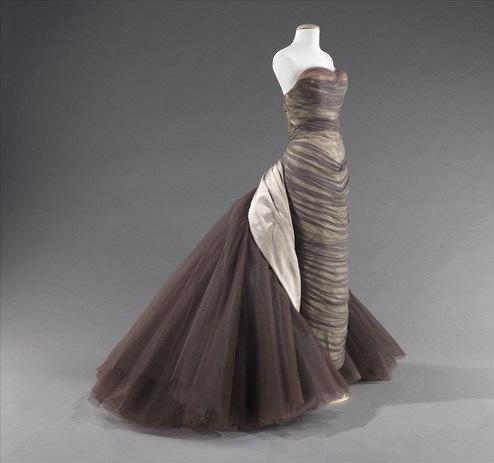 James showed one of his most successful collections in Paris in 1947. In the 1950s he spent most of his time in New York.

James looked upon his dresses as works of art, as did many of his customers. Year after year he reworked original designs, ignoring the sacrosanct schedule of seasons. The components of the precisely constructed designs were interchangeable so that James had a never-ending fund of ideas on which to draw. He is most famous for his sculpted ball gowns made of lavish fabrics and to exacting tailoring standards, but is also remembered for his capes and coats, often trimmed with fur and embroidery, his spiral zipped dresses, and his white satin quilted jackets.

After the birth of his son, Charles James Jr. in 1956, he also produced a children’s collection.

He designed the interior and several pieces of furniture for the Houston home of John and Dominique de Menil.

After returning to New York City from Paris, Scaasi worked for James for two years. James retired in 1958.

He died alone, of bronchial pneumonia, at the Chelsea Hotel in New York.