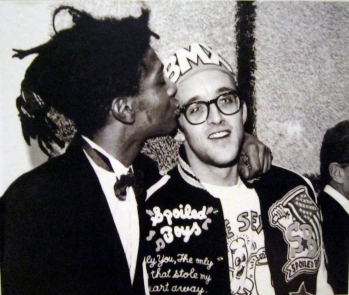 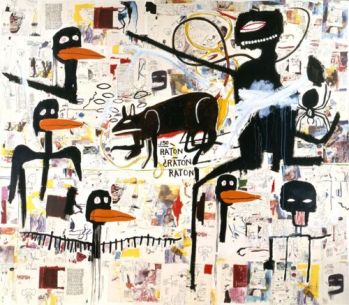 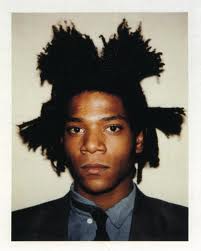 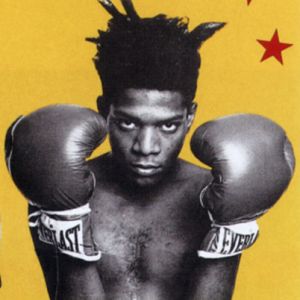 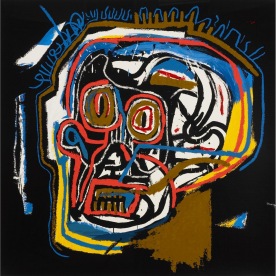 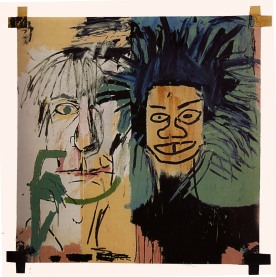 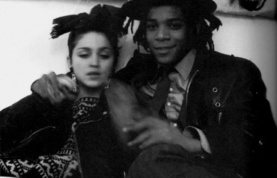 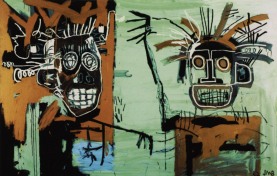 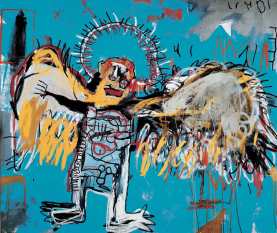 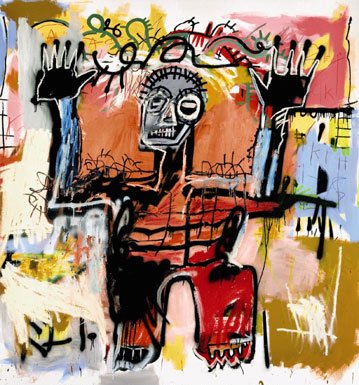 Jean Basquiat, 27, An Artist of Words And Angular Images

ean Michel Basquiat, a Brooklyn-born artist whose brief career leaped from graffiti scrawled on SoHo foundations to one-man shows in galleries around the world, died Friday at his home in the East Village. He was 27 years old.

His agent, Vrej Baghoomian, said the cause of death appeared to have been a heart attack or drug overdose. Mr. Basquiat had been planning to depart last weekend for a monthlong trip to the Ivory Coast, Mr. Baghoomian said.

The son of a Haitian accountant, Mr. Basquiat began drawing on sheets of paper his father brought home from the office. He never received formal training, Mr. Baghoomian said, and his paintings incorporated images of angular people and symbols with lone words or phrases. In an interview in The New York Times Magazine in 1985, he said he used words ”like brushstrokes.”

During his graffiti period, he worked with a friend, Al Diaz, and the two signed their work Samo, followed by a copyright symbol. When the friendship fizzled, Mr. Basquiat wrote ”Samo is dead” prominently around lower Manhattan.

Critics praised his work for its composition, color and balance between spontaneity and control. While still in his early 20’s, his work was shown at leading SoHo galleries, including the Annina Nosei Gallery and the Mary Boone Gallery, and his work was exhibited in galleries from SoHo to Paris, Tokyo and Dusseldorf. His paintings sold for $25,000 to $50,000, Mr. Baghoomian said.

Mr. Basquiat formed a close friendship with Andy Warhol, immortalizing it in a double portrait that sold in the auction of Warhol’s collection at Sotheby’s last spring, Mr. Baghoomian said. The two also collaborated on a series exhibited in 1985 that featured cartoon characters and corporate logos.

At the time of his death, Mr. Basquiat was living in a building he rented from Warhol’s estate. ”Andy’s death really affected him,” Mr. Baghoomian said. But Mr. Basquiat had long been moody, he added: ”Emotionally, he was always in turmoil.”

Mr. Basquiat also achieved renown in the contemporary art world for his temper, which once led him to destroy a number of unfinished paintings. In another incident, he leaned out of a window and poured dried fruit and nuts onto the head of a dealer as she left his building.

Mr. Basquiat’s paintings are included in the collections of the Whitney Museum of American Art and the Museum of Modern Art.

He is survived by his father, Gerard, and mother, Matilde, both of Brooklyn, and two sisters, Lisane and Jeanine.