The artist Jan Vermeer was born 328 years ago today (give a day or two).  Halloween is his official birthdate, but that ‘c.’ leads me to believe it is an educated guess. 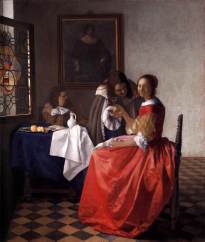 BEST KNONW FOR: Dutch Golden-Age artist Jan Vermeer is best known for his Delft paintings including “Little Street,” “View of Delft” and his late “pearl pictures” like “The Concert.”

Born in Delft, Netherlands, circa October 31, 1632, Johannes Vermeer is one of the most highly regarded Dutch artists of all time. His works have been a source of inspiration and fascination for centuries, but much of his life remains a mystery. His father, Reynier, came from a family of craftsmen in the town of Delft, and his mother, Digna, had a Flemish background.

After his baptismal record at a local church, Vermeer seems to disappear for nearly 20 years. He likely had a Calvinist upbringing. His father worked as a tavern keeper and an art merchant, and Vermeer inherited both of these business upon his father’s death in 1652. The following year, Vermeer married Catherina Bolnes. Bolnes was Catholic, and Vermeer converted to her faith. The couple moved in with her mother, and would eventually have 11 children together.

In 1653, Jan Vermeer registered with the Delft Guild as a master painter. There’s no record of who he may have apprenticed under, or whether he studied locally or abroad. Vermeer definitely had at least a friendship with leading Delft painter Leonard Bramer, who became one of his early supporters. Some experts also believe that Vermeer may have been influenced by the works of Rembrandt through one of Rembrandt’s students, Carel Fabritius.

The influence of Caravaggio is apparent in Vermeer’s early works, including “The Procuress” (1656). The painter also explored mythology in “Diana and Her Companions” (1655-56) and religion in “Christ in the House of Mary and Martha” (c. 1655). By the end of the decade, Vermeer’s unique style began to emerge.

Many of Vermeer’s masterworks focus on domestic scenes, including “The Milkmaid” (c. 1657-58). This depiction of a woman in the midst of her work showcases two of his trademarks: his realistic renderings of figures and objects, and his fascination with light. Many of his works have a luminous quality, including the portrait “Girl with a Pearl Earring” (1665). This captivating portrait of a young woman inspired the 1999 novel Girl with a Pearl Earring by Tracy Chevalier, as well as a 2003 film adaptation of this book.

Vermeer enjoyed some success in Delft, selling his works to a small number of local collectors. He also served as head of the local artistic guild for a time. However, Vermeer was not well-known outside of his community during his lifetime.

Jan Vermeer struggled financially in his final years, due in large part to the fact that the Dutch economy had suffered terribly after the country was invaded by France in 1672. Vermeer was deeply indebted by the time of his death; he died in Delft circa December 16, 1675.

Since his passing, Vermeer has become a world-renowned artist, and his works have been hung in many prominent museums around the globe. Despite how much he is admired today, Vermeer left behind a small legacy in terms of actual works—approximately 36 paintings have been officially attributed to the painter.