Today is the 90th birthday of the phenomenal Elaine Stritch.  Her career and life are inspirational in every way.  The world is a better place because she is in it and still feels the loss that she has left. 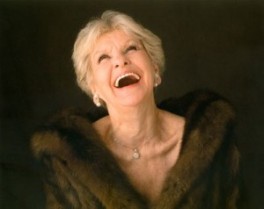 BEST KNOWN FOR: Vocalist and actress Elaine Stritch was a renowned star of stage, film and TV. She was known for a wide array of projects that included the Broadway productions Sail Away and Company as well as screen outings like The Ellen Burstyn Show, 30 Rock and Elaine Stritch at Liberty.

Elaine Stritch was born on February 2, 1925 in Detroit, Michigan, the youngest of three girls. A natural performer, she eventually opted to move to New York City in 1944 and attend the New School, having as her classmates fellow thespians like Walter Matthau and Marlon Brando, with Stritch and Brando dating for a time.

Stritch did a variety of stage work before making it to Broadway, with some of her earliest productions including Loco (1946), Made in Heaven (1946) and Angel in the Wings (1947). Her scintillating performance in 1952’s Pal Joey became the talk of the town, and by mid-decade she received her first Tony nomination for the 1955 play Bus Stop, about a group of passengers who get snowed in at a Midwest diner.

Stritch continued to nurture her stage career, with the productions The Sin of Pat Muldoon (1957) and Goldilocks (1958) rounding out the decade. She earned her second Tony nomination for 1961’s Sail Away, a musical penned by Noel Coward specifically for the actress in which she played a love-struck cruise ship hostess. In 1962, Stritch took over the Uta Hagen role in Edward Albee’s Who’s Afraid of Virginia Woolf? before taking a break from the Broadway stage for some time.

In 1970, Stritch returned to the limelight in a big way with Stephen Sondheim’s groundbreaking musical Company. As cynical New York society maven Joanne, Stritch delivered songs with verve and a deliciously mischievous wit, including the ode to marriage “The Little Things You Do Together” and “The Ladies Who Lunch,” the latter becoming her trademark for decades. She also received another Tony nomination.

While earning acclaim on the Broadway stage, Stritch also became a force to be reckoned with on both the big and small screens. She co-starred in the 1956 crime drama The Scarlet Hour and would play a variety of film roles in projects like A Farewell to Arms (1957), The Perfect Furlough (1958) and Too Many Thieves (1967). She worked with director Woody Allen in his films September (1987) and Small Time Crooks (2000), with other notable roles over the years including Cocoon: The Return (1988), Screwed (2000), Autumn in New York (2003), Monster-in-Law (2005) and ParaNorman (2012).

In the land of TV, Stritch starred from 1960-61 in the sitcom My Sister Eileen, about two siblings making their way in New York. Later, after traveling with a touring production of Company to the UK, she opted to remain across the pond during the ‘70s and early ‘80s. She continued her stage work and starred in British television productions like Two’s Company and Nobody’s Perfect.

During this time, Stritch had married fellow actor John Bay in 1973. It was a happy union, with the couple returning to the U.S. in 1982, the year that he died. Stritch subsequently fell into a depression and started to drink heavily, having struggled with liquor previously.

Upon returning to the states, Stritch took on the role of family matriarch on The Ellen Burstyn Show, which debuted in 1986, and then had reoccurring guest appearances on The Cosby Show as teacher Mrs. McGee. Stritch was nominated for eight Emmys over the course of her career, winning several, including for a guest spot on Law & Order as well as for playing the mother of Jack Donaghy (Alec Baldwin) on the sitcom 30 Rock.

Stritch remained part of the theatrical community into her later years, playing Parthy Ann Hawks in the 1994 revival of Showboat and returning to Albee’s prose with the 1996 revival of A Delicate Balance, for which she earned her fourth Tony nod. She then starred in a 2002 one-woman revue, Elaine Stritch at Liberty, in which she performed songs and spoke poignantly about her life experiences. The production received a Tony for Special Theatrical Event. Later, an HBO TV version won two 2004 Emmys.

Stritch’s last role in a Broadway production came in 2010, when she joined the revival of another Sondheim production, A Little Night Music, to play Madame Armfeldt. She also had a cabaret act at the Café Carlyle, connected to the hotel at which she had a long-term residence, before moving back to her birth state.

Elaine Stritch died at 89 on July 17, 2014 at her home in Birmingham, Michigan. A documentary on her life, Elaine Stritch: Shoot Me, was released the previous year.