Today is the 94th birthday of Betty Hutton.  Her Rags to riches to rags to riches story is full of second acts, she has several.  It is a great American life.  The world is a better place that she was in it and still feels the loss that she has left. 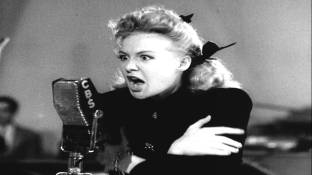 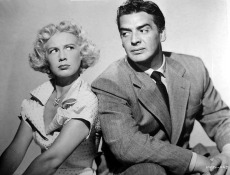 BEST KNOWN FOR: A popular film actress of the 1940s and 1950s, Betty Hutton starred in such films as Annie Get Your Gun and Greatest Show on Earth.

Born Elizabeth Jane Thornburg on February 26, 1921, in Battle Creek, Michigan, entertainer Betty Hutton started performing at a young age. Her father walked out on the family when she was a toddler, and her mother did what she could to take care of Betty and her sister, Marion, including selling homemade gin and beer during Prohibition. At the age of 3, Hutton began singing as a way to earn spare change from her mother’s customers.

According to the Washington Post, Hutton’s family situation grew more dire over the years: “I quit school when I was 9 years old and starting singing on street corners because my mother was an alcoholic,” Hutton later explained. By age 15, Hutton was working professionally, appearing in a Detroit nightclub. There, she was discovered by bandleader Vincent Lopez. It was Lopez’s idea for her change her last name to Hutton.

After performing with Lopez for a time, Hutton went out on her own. She made her Broadway debut in 1940’s Two for the Show. Later that year, she appeared with Ethel Merman in Panama Hattie. Soon, she moved to film, brought out to Hollywood by a Paramount executive.

Hutton brought an explosive energy to her movie roles, beginning with 1942’s The Fleet’s In with Dorothy Lamour and William Holden. Two years later, she starred in the 1944 wartime comedy The Miracle of Morgan’s Creek, directed by Preston Sturges, and her platinum locks and curvy figure quickly earned her nicknames such as “the Blond Bombshell” and “the Blond Blitz.”

More starring film roles soon followed. In 1945, Hutton played entertainer Texas Guinan in Incendiary Blonde. She then brought the life of silent film star Pearl White to the big screen in 1947’s The Perils of Pauline. In 1950, the actress tackled perhaps her most famous role in the hit musical Annie Get Your Gun, about famed sharpshooter and western star Annie Oakley.

Hutton had two major film projects in 1952: She starred in Cecil B. DeMille’s grand spectacular Greatest Show on Earth and in the biopic Somebody Loves Me, based on the life and career of vaudeville singer and actress Blossom Seeley. These movies proved to be two of Hutton’s final big screen efforts.

Hutton walked out on her film contract after a dispute with the studio.

She wanted her second husband, Charles O’Curran, to be her director, and the studio refused. After her split from Paramount, Hutton only made one more film: the 1957 low-budget drama Spring Reunion. Two years later, she tried her luck with television, starring on The Betty Hutton Show. The program lasted only one season.

As her career faded, Hutton fell prey to her personal demons and financial woes. She abused sleeping pills and other drugs for many years. In 1967, she declared bankruptcy, having spent the $9 million to $10 million that she had earned during her heyday. A few years later, she had a mental breakdown, subsequently spending time in a treatment facility.

With the help of Father Peter Maguire, Hutton managed to turn her life around. She became a Catholic and spent years working in his church in Rhode Island. In 1980, she returned to the Broadway stage in the musical Annie. Also around this time, she became a drama teacher at Salve Regina University in Newport, Rhode Island.

After Maguire’s death in 1996, Hutton moved to Palm Springs, California, hoping to reconcile with her three daughters who lived in the state. Married four times, Hutton had two children, Candy and Lindsay, with her first husband, Ted Briskin. Her third child, Caroline, was from her fourth marriage to jazz musician Pete Candoli. “My husbands all fell in love with Betty Hutton,” the famous blond bombshell once said, according to The New York Times. “None of them fell in love with me.”

Hutton died of complications from colon cancer on March 11, 2007, at the age of 86, in her Palm Springs home. There was a small, private service to mark her passing, which her daughters did not attend. Despite her efforts, Hutton had not been able to mend the rift between her and her children.

Whatever she experienced in her personal life, there is no question that Betty Hutton left an indelible mark on the world of film. “The thing about Betty Hutton was she could sing a song and break your heart, and she was a very good actress,” Robert Osborne, TV host and film historian, told the Los Angeles Times. “Behind the zaniness there was a very sweet, vulnerable person.”