Today is the 104th birthday of the original blonde bombshell:  Jean Harlow.  It is amazing to think that someone can die at 26 over 70 years ago and the world can still adore her.  Watch a few of her films and the biopic Harlow with Caroll Baker, you will become a lifelong fan.  Some people just have IT, although IT never gets any better defined than that.  Just something that draws us moths to their flame, something that we see, admire, perhaps even aspire to, but IT is something that attracts us on a biological level.  The world is a better place because she was in it and still feels the loss that she left. 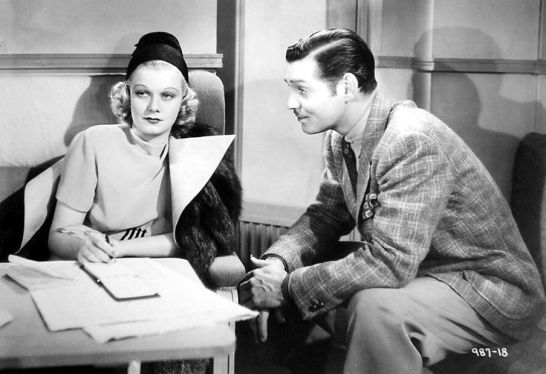 BEST KNOWN FOR: Jean Harlow was an American actress who proved herself a platinum-blonde sex-symbol and able comedian in 1930s Hollywood.

Jean Harlow (March 3, 1911 – June 7, 1937) was an American film actress and sex symbol of the 1930s. Known as the “Blonde Bombshell” and the “Platinum Blonde” (due to her platinum blonde hair), Harlow was ranked as one of the greatest movie stars of all time by the American Film Institute. Harlow starred in several films, mainly designed to showcase her magnetic sex appeal and strong screen presence, before making the transition to more developed roles and achieving massive fame under contract to Metro-Goldwyn-Mayer (MGM). Harlow’s enormous popularity and “laughing vamp” image were in distinct contrast to her personal life, which was marred by disappointment, tragedy, and ultimately her sudden death from renal failure at the age of 26.

Harlow wrote a novel, entitled Today is Tonight. According to Arthur Landau in his introduction to the 1965 paperback edition, Harlow stated her intention to write the book around 1933–1934, but it was not published during her lifetime. After her death, Landau writes, her mother sold the film rights to MGM, but no film was made. The publication rights to the novel were passed from Harlow’s mother to a family friend and the book was finally published in 1965.