Today is the 54th birthday of visionary, artist, and quite possibly alien from the future Leigh Bowery.  It is very brave to make your life performance art. You can see his influences in people are considered ‘edgy’ today.  The world is a better place because he was in it and still feels the loss that he has left it.

Leigh Bowery (26 March 1961 – 31 December 1994) was an Australian performance artist, club promoter, actor, pop star, model and fashion designer, based in London. Bowery is considered one of the more influential figures in the 1980s and 1990s London and New York art and fashion circles influencing a generation of artists and designers. His influence reached through the fashion, club and art worlds to impact, amongst others, Alexander McQueen, Lucian Freud, Vivienne Westwood, Boy George, Antony and the Johnsons, John Galliano, the Scissor Sisters, David LaChapelle, Lady Bunny plus numerous Nu-Rave bands and nightclubs in London and New York which arguably perpetuated his avant garde ideas.

Glimmers of the influences of film maker John Waters and artist Andy Warhol can be seen in his keen appreciation of bad taste, truly outlandish self presentation and a deep desire to shock and confuse. “I want to be the Andy Warhol of London” he once said. “Dressed-up,” he was obviously “Modern Art on legs” (as Boy George commented), but in daytime attire the badly-fitting, obvious, disturbing wigs are a nod to Warhol’s self-presentation strategies that has thus far seemed invisible to both critics and friends alike.

Other art historical parallels include an early 80s attempt at Vincent van Gogh type ear-cutting with friend Trojan (in an attempt to out do nightclub rivals), and as a result inflicted facial perforations that he was warned would not heal (reminiscent of Warhol’s weeping wounds). Bowery made a full auto-couture appearance at the 1986 Warhol show Success is a job in New York at London’s Serpentine Gallery with Nicola and an unknown assistant. 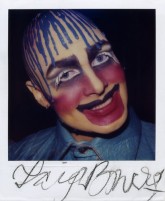 He became known to a wider audience by appearing in a Post-Modernist/Surrealist series of television and cinema and commercials for the Pepe jeans company, MTV London and other commissions such as stage work for rock band U2. He also appeared regularly in articles, vox pops and as cover star in London’s i-D magazine. Bowery was also Art Director for the famous video for Massive Attack’s “Unfinished Sympathy”.

As a character he featured in the stage musical Taboo that was based on the New Romantic movement. It also featured actors playing Marilyn, Boy George, Steve Strange and other stars of the early 1980s. The musical, which was written by Mark Davies with music composed partly by Boy George, was a London West End hit. American media star Rosie O’Donnell financed a much- altered version for Broadway, but this was not successful.

Johnny Rozsa‘s photographs of Bowery have been exhibited in several museums, including the Museum of Contemporary Art in Sydney, the Kunsthalle in Vienna, and the Kunstverein in Hanover.