Since posting a very short obituary in the local daily paper with a link to the piece  I wrote about my father, I have been receiving a lot of really terrific comments from people whose lives he has touched.

It is great to know that he is remembered and thought of fondly, and mourned with the feeling of loss of someone who added value to the lives of those he met.

These comments and stories about my father from his friends are so extraordinarily healing.  They are creating new memories that are becoming very valuable to me.  You see, a lot of my memories are colored with a feeling of longing and loss, feelings of not understanding why he was not around and for a long time, thinking it was my fault.

Going through his wallet and finding school-age photos of my sister and me made me realize what I probably always knew:  he loved me.  That is what I am left with.

We spread his ashes off of the beach at Twanoh State Park on Hood Canal.  I have visited the spot every week since, tears and sadness slowly being transformed into a comforting calmness.  I know this spot will be a place of solace for me.

The following is a compilation of the comments left by his friends, he may not have left tangable things, but he left behind friends that are warm and caring gracious with their sharing of their memories.  That inheritance is absolutely priceless.

I am so sorry for your loss. Your dad came into the store I work at a lot less often the last couple of years. But I always looked forward to visiting with him and catching up on our families. He will be greatly missed! -Jen

Your dad’s sister, Barbara, was one of my best friends in highschool–West Bremerton High. She was one of my Bridesmaids. I knew Ron and considered him to be a very nice person. Ron and Barbara were twins adopted by Mr. and Mrs. Babb, and were thought to be descendants of Pocahontas. Mrs. Babb was from England and had a wonderful talent as a whistler, having performed on radio. Mr. Babb had a hobby of growing Dahlias and created new types naming some after your dad and Barbara. They were beautiful flowers. They lived in a house on the main street of Bremerton and the folks had a summer place on Hood Canal. The Babbs were very decent, very nice people. They both worked at the ship yard. Your dad was a quiet person and always very pleasant. I’m sorry I can’t tell you more about him. – Sandra 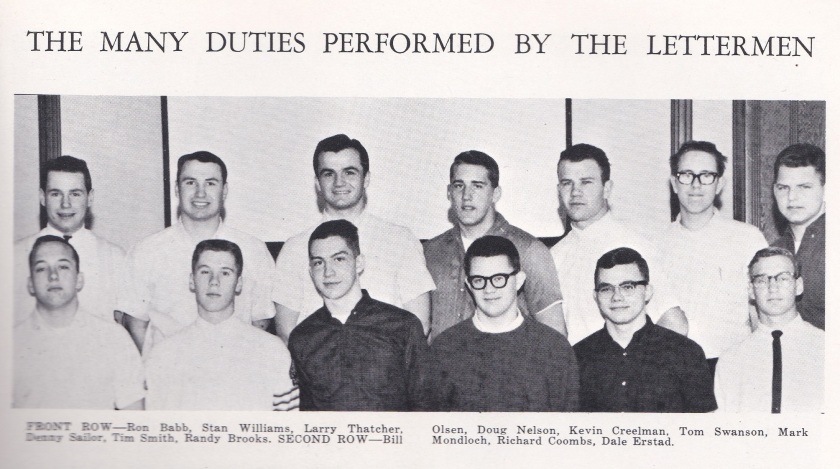 I am not technical enough to know if this gets through – please let me know if it gets to Scott Parker-Anderson. My name is Jim Maroldo. I was born in Bremerton, but now live in Florida. I considered Ron Babb to be my best friend from about the 5th grade until early high school. We sort of drifted apart as I went to college in Seattle and subsequently moved to the east coast. I was honored when he asked me to be in his wedding party. I last saw Ron in 1989 when he was living in his parent’s home on the Canal. It is also he last time I remember seeing his sister, Barbara. I recall that Ron said that he was divorced, and that he was working for the National Guard. He was friendly to me, but somewhat guarded. I asked about Ron at the last few high school reunions (which he did not attend) and at our 50th class reunion last July. Sadly I could not find anyone who knew what had happened to him. I wished that I had tried harder to find him. Ron was well liked and respected in school. I always considered him to be one of my best childhood friends. He made a positive impact in my life. I will miss him. I am so sorry that his last years were apparently so lonely. -Jim

Ron was a great friend and classmate to many while his quiet spirit was certainly his strength. I also remember Ron as well rounded while singing in the choir, President of the Latin Club, playing football and tennis as well as a proud member of the Lettermen Club. This is such a personal reminder that at some point in time we all have a seemingly battle we are fighting and not to judge. I am reminded of a great line in the song Colors of the Wind “You think that people who are people are people who think and look like you but if you walk in the footsteps of a stranger you learn the things you never knew, you never knew”. R.I.P. Ron while where ever your favorite spot was/is of your ashes you will never be forgotten. Lonny Folger, West High ’64. – Lonny

I went to school with Ron from grade school through high school.. Your dad and I had
many beers together, good times. Your dad loved to salmon fish and so did I it didn’t matter if the weather was good or bad, we went no matter what.  – Lauren

I knew your Dad from junior high on through high school. He was so very well liked and a great person. I just got out my year book and these are the activities he participated in: Outdoor Club, Football, Tennis, Wrestling, Chamber of Commerce, Choir, Modernaires (the elite singers), Latin Club President, Golden Paw, and Lettermen. This was Lettermen’s club which you earned through sports.

I feel for you and as you said it is sad how he spent the last twenty years, none of us knew but his name has always been brought up at the class reunions and we were hoping to see Ron, too bad we didn’t know he needed our help.

I hope you find some peace with input from those who are able to tell a story or two.  Sincerely – Kathie

I knew your Dad since childhood. Lived near him when they were in the house on Pacific Avenue. His folks (your grandma and Grandpa) I always called Mr. and Mrs. Babb, very nice people. First met him in grade school at Smith School on Park Avenue. Would walk to grade school, jr high school and high school with him, not everyday but most days. I’d stop by and get him when I started driving to West High, that was in 1962.

Kind of lost contact with him after we graduated in 1964. I worked at The Sun newspaper on 5th Street from 1960 until I went into the Air Force in June 1965. I guess he got married sometime while I was in the service.

I came home in October 1967 for leave just before going over to Vietnam. I remember he was part of a group of old classmates that went down one night during my leave time to the 502 building in PSNS and played basketball, there was about eight of us. I got them all on the base and afterward we went in the canteena for a beer. We were having fun and shooting the bull and the server said “Bet you guys can’t drink a hundred cans of beer between you”. If you do the beer is on me. That was the wrong thing to say to 8 guys that had just turned 21. Needless to say we did drink the hundred cans of beer but we all felt pretty bad the next day.

I got back home in November 1968 and got ahold of him. He and your Mom lived on Veldee Avenue (if I remember right) and I met her for the first time then and met you as a young child. I saw him off and on as I started on my career in beer and wine distribution in 1968.

In September 1973 I got married and your Dad was one of the groomsmen in our wedding. We would run into each other on occasion over the years but that was by just happen chance. Had not seen him for a long time, last time I believe, was at Dick Thompson’s house on Kitsap Lake.

After reading what you wrote I now understand why I did not run into him. He was a great friend over the years and I liked him a lot. Good bye Ronnie Babb! – Jim Herdman