Today is the 98th birthday of the artist Jacob Lawrence.  The first piece of his I ever saw is called “The Library,” when I was flipping through a large volume of African American artists.  It stopped me cold.  I stared and stared at it and returned several time to look at it (it was not allowed to be loaned out).  The world is a better place because he was in it and still feels the loss that he has left. 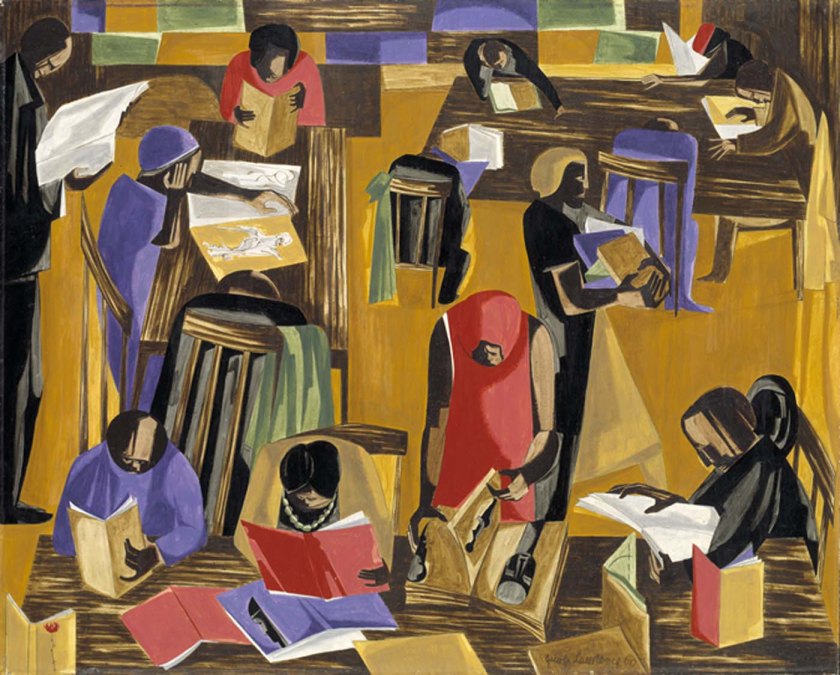 Born in Atlantic City, New Jersey, on September 7, 1917, Jacob Lawrence moved with his parents to Easton, Pennsylvania, at the age of 2. When his parents separated in 1924, his mother deposited him and his two younger siblings in foster care in Philadelphia, and went to work in New York City. When he was 13, Lawrence joined his mother in Harlem.

Lawrence was introduced to art shortly after his arrival, when his mother enrolled him in Utopia Children’s Center, which had an after-school art program. He dropped out of school at 16 but took classes at the Harlem Art Workshop with Charles Aston and frequently visited the Metropolitan Museum of Art.

In 1937, Lawrence won a scholarship to the American Artists School in New York. When he graduated in 1939, he received funding from the Works Progress Administration Federal Art Project. He had already developed his own style of modernism, and began creating narrative series, painting 30 or more paintings on one subject. He completed his best-known series, Migration of the Negro or simply The Migration Series, in 1941. The series was exhibited at Edith Halpert’s Downtown Gallery in 1942, making Lawrence the first African-American to join the gallery.

At the outbreak of World War II, Lawrence was drafted into the United States Coast Guard. After being briefly stationed in Florida and Massachusetts, he was assigned to be the Coast Guard artist aboard a troopship, documenting the experience of war around the world. He produced 48 paintings during this time, all of which have been lost.

When his tour of duty ended, Lawrence received a Guggenheim Fellowship and painted his War Series. He was also invited by Josef Albers to teach the summer session at Black Mountain College in North Carolina. Albers reportedly hired a private train car to transport Lawrence and his wife to the college so they wouldn’t be forced to transfer to the “colored” car when the train crossed the Mason-Dixon Line.

Back in New York after his stint in the south, Lawrence continued to paint. He grew depressed, however, and in 1949, he checked himself into Hillside Hospital in Queens, where he stayed for 11 months. He painted as an inpatient, and the work created during this time differs significantly from his other work, with subdued colors and people who appear resigned or in agony.

After leaving Hillside, Lawrence turned his attention to the theater. In 1951, he painted works based on memories of performances at the Apollo Theater in Harlem. He also began teaching again, first at Pratt Institute and later the New School for Social Research and the Art Students League.

In 1971, Lawrence accepted a tenured position as a professor at University of Washington in Seattle, where he taught until he retired in 1986. In addition to teaching, he spent much of the rest of his life painting commissions, producing limited-edition prints to help fund nonprofits like the NAACP Legal Defense Fund, the Children’s Defense Fund and the Schomburg Center for Research in Black Culture. He also painted murals for the Harold Washington Center in Chicago, the University of Washington and Howard University, as well as a 72-foot mural for New York City’s Times Square subway station.

Lawrence painted until a few weeks before he died, on June 9, 2000.