Today is Montgomery Clift’s 95th birthday.  His life seemed to be full of super highs and super lows and I think that makes the best life story.  It makes me root for them (even if I know the outcome) and love their humanity, vulnerability, and fragility.  Plus, his best friend was Elizabeth Taylor, the 1950’s Elizabeth Taylor at that.  Have you seen A Place in the Sun or Misfits lately?  Have you seen them ever?  They both have ridiculously talented casts that make them more than worthwhile to watch.  The world is a better place because he was in it and still feels the loss that he has left. 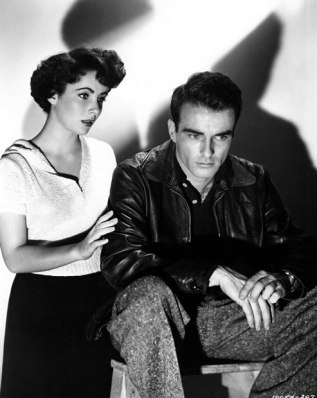 He invariably played outsiders, often “victim-heroes,” – examples include the social climber in George Stevens’s A Place in the Sun, the anguished Catholic priest in Hitchcock’s I Confess, the doomed regular soldier Robert E. Lee Prewitt in Fred Zinnemann‘s From Here to Eternity, and the Jewish GI bullied by antisemites in Edward Dmytryk’s The Young Lions. Later, after a disfiguring car crash in 1956, and alcohol and prescription drug abuse, he became erratic. Nevertheless important roles were still his, including “the reckless, alcoholic, mother-fixated rodeo performer in Huston’s The Misfits, the title role in Huston’s Freud, and the concentration camp victim in Stanley Kramer‘s Judgment at Nuremberg.“

Clift received four Academy Award nominations during his career, three for Best Actor and one for Best Supporting Actor.