Today is David Rakoff‘s 51st birthday.  He is quite possibly the wittiest writer we have seen this century.  The 2oth century had Dorothy Parker and the 21st had David Rakoff.  He has also had the great fortune of being an excellent orator of his own works, reading a David Rakoff book is a treasure, but listening to him read it brings color and light and darkness (oh the amazingly beautiful darkness) to the words in the ways he intended.  His death is an enormous loss for the world.  Please do yourself a favor and read (or listen to) something that he has written, I guarantee you will become a veracious fan.

I have re-posted several of my favorite David Rakoff posts today.

David Rakoff was born in Montreal, Quebec, Canada, the youngest of three children. His brother, the comedian Simon Rakoff, is four years older than David and their sister Ruth Rakoff, author of the cancer memoir When My World Was Very Small, is the middle child.   Rakoff has said that he and his siblings were close as children.[4][6] Rakoff’s mother, Gina Shochat-Rakoff, is a doctor who has practised psychotherapy and his father, Vivian Rakoff, is a psychiatrist.  Rakoff has written that almost every generation of his family fled from one place to another.  Rakoff’s grandparents, who were Jewish, fled Latvia and Lithuania at the turn of the 20th century and settled in South Africa.  The Rakoff family left South Africa in 1961 for political reasons, moving to Montreal for seven years. In 1967, when he was three, Rakoff’s family moved to Toronto.  As an adult, he said that he identified as Jewish.

“I will stipulate to having both French sea salt and a big bottle of extra virgin in my kitchen. And while the presence of both might go some small distance in pigeonholing me demographically, neither one of them makes me a good person. They are mute and useless indicators of the content of my character.”
― David Rakoff, Don’t Get Too Comfortable: The Indignities of Coach Class, The Torments of Low Thread Count, The Never-Ending Quest for Artisanal Olive Oil, and Other First World Problems

Rakoff attended high school at the Forest Hill Collegiate Institute, graduating in 1982. In the same year he moved to New York City to attend Columbia University, where he majored in East Asian Studies and studied dance.  Rakoff spent his third year of college at the School of Oriental and African Studies in London and graduated in 1986. Rakoff worked in Japan as a translator with a fine arts publisher. His work was interrupted after four months when, at 22, he became ill with Hodgkin’s disease, a form of lymphatic cancer which he has referred to as “a touch of cancer”. He returned to Toronto for eighteen months of treatment, including chemotherapy, radiation, and surgery.

“Being a stranger was like being dead,
and brought to mind how, in a book he had read
that most folks misunderstood one common state:
The flip side of love is indifference, not hate.”
― David Rakoff, Love, Dishonor, Marry, Die, Cherish, Perish

From 1982, Rakoff lived in the United States (minus his four-month stay in Japan in 1986), first as a student, then as a resident alien. In the early 1990s he was issued a green card, a subject about which he wrote in one of his early newspaper articles.[8] After living in the United States for twenty-one years, Rakoff was motivated by a desire to participate in the political process and applied for U.S. citizenship. Rakoff chronicled the experience of becoming an American citizen in an essay published in Don’t Get Too Comfortable. He became a U.S. citizen in 2003, while at the same time retaining his Canadian citizenship.

Rakoff was a prolific freelance writer and a regular contributor to Conde Nast Traveler, GQ, Outside Magazine and The New York Times Magazine. His writing also appeared in Business 2.0, Details, Harper’s Bazaar, Nerve, New York Magazine, Salon, Seed, Slate, Spin, The New York Observer, Vogue, Wired and other publications. He wrote on a wide and eclectic range of topics. 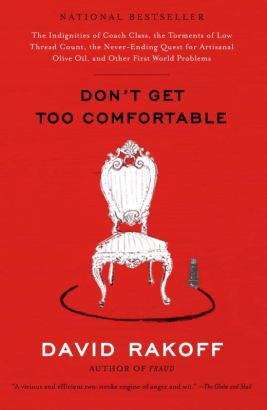 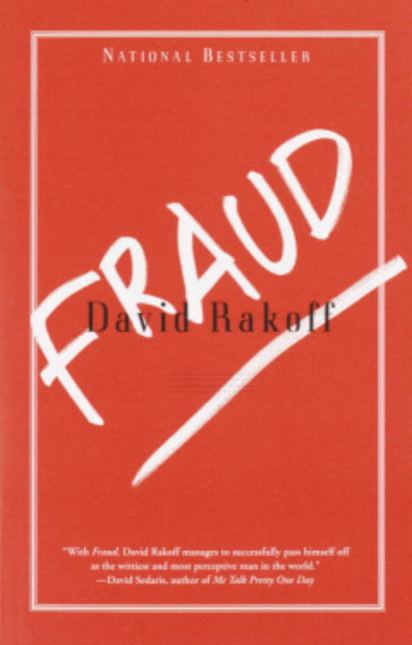 Rakoff published three bestselling collections of essays, which include his own illustrations. Both Fraud (Doubleday 2001) and Don’t Get Too Comfortable (Doubleday 2005) were awarded a Lambda literary award (which recognises excellence among LGBT writers who use their work to explore LGBT lives), both times in the “Humor” category. Half-Empty (2010) won the 2011 Thurber Prize for American Humor.

In 2010, while writing the book Half Empty, Rakoff was diagnosed with a malignant tumor, Hodgkin’s lymphoma, and later developed a post-radiation sarcoma behind his left collarbone and began chemotherapy.  He died in Manhattan on August 9, 2012.