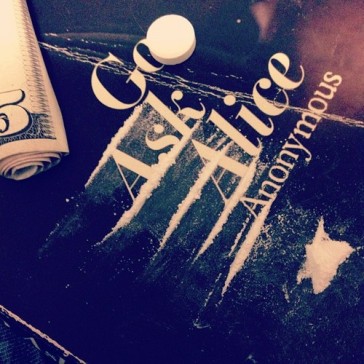 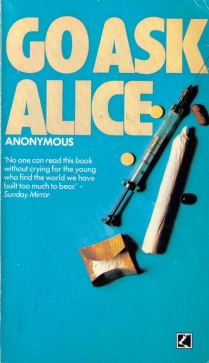 For some reason, the film version of this book popped into my head last night.  I remember seeing it around the same time I read the book.  I am pretty sure it had no influence on me doing or not doing drugs, although she did a lot of acid or PCP or Angel Dust.  Whatever happened to Angel Dust?  It was the scariest drug that I had ever heard of, you would hear news reports of people needing to be restrained by six state troopers because they were on it.  It has probably been re-branded as something else now.

While some people believe that Go Ask Alice is not a true diary after all, but the wholly or partly fictional work of Beatrice Sparks (one of the book’s editors and the author of several fictional teen “diaries”), the diary indisputably evokes the drug and sex-saturated atmosphere of the late 1960s. After several underground and some mainstream movements—think of Elvis Presley, James Dean, and the Beat writers—punctured the conformist bubble of the 1950s, the baby-boomers of the 1960s were ready to join the revolution. Easier access to drugs and birth control and an unpopular war in Vietnam only solidified their desires as they followed the mantra of mad scientist Timothy Leary to tune in, turn on, and drop out. Society was divided along generational lines between the powerful establishment of old, white men and the insurgent counterculture.

Alice is caught in the midst of the societal struggle, and her diary reflects her experiences and feelings. She harbors conventional bourgeois aspirations, such as marriage, and also disdains the hypocrisy of the establishment that makes it easier for minors to acquire illegal drugs than alcohol. She grows long, straight hippie-style hair and uses the informal language of the counterculture (e.g. “Dig, man?”) Her experiments with drugs—including marijuana, the one she has heard so much about, and LSD—are the substances that privileged white teens had newfound access to in the 60s, and her sexual exploits exhibit the new Sexual Revolution. Still, the book is oddly sealed off from the rest of 60s culture. Alice hardly mentions listening to music, not once naming artists like Bob Dylan, Janis Joplin, or even The Beatles as contributors to societal or personal protest and experimentation. More glaring is the omission if the Vietnam war, discussed only briefly between Alice and her father; Alice’s most political act is attending an unspecified rally where she does drugs. While this may simply have been Alice’s route, many supposed rebels in the counterculture did little more than jump on the bandwagon and use revolutionary politics as an excuse for hedonism.

Go Ask Alice is also an epistolary work, a narrative constructed by letters (in this case, diary entries). Many of the earliest novels in the English language were epistolary—Samuel Richardson‘s Pamela, for instance—and Go Ask Alice adapts the style for its modern needs. Assuming the book is a real diary, Alice is presented to us as she really was, with observations and experiences both dramatic and insignificant, as her life unfolds naturally. If the book is fictional, or a fictionalized diary, the author still allows Alice to speak in her own highly plausible language, with a first-person account that makes her experiences, foreign to some readers, sympathetic and realistic. In the tradition of other first-person coming-of-age novels, such as Mark Twain‘s ##Huckleberry Finn# J.D. Salinger‘s ##The Catcher in the Rye# and Russell Banks’s Rule of the Bone, Alice speaks directly to the reader. As is Salinger’s underlying intent of having the alienated Holden Caulfield connect most deeply with his reader, Alice (or Beatrice Sparks—and it doesn’t really matter in the end) fulfills her goal of becoming a social worker through her first-person direct address.

In an article on the Urban Legends Reference Pages (snopes.com), urban folklore expert Barbara Mikkelson points out that even before the revelations about Go Ask Alice ’​s authorship, there was ample internal evidence that the book was not an actual diary. The lengthy, detailed passages about the harmful effects of illicit drugs and the relatively small amount of space dedicated to relationships and social gossip seem uncharacteristic of a teenage girl’s diary. In addition, the article mentions the disclaimer in the book’s copyright notice page, which states: “This book is a work of fiction. Any references to historical events, real people, or real locales are used fictitiously. Other names, characters, places, and incidents are the product of the author’s imagination, and any resemblance to actual events or locales or persons, living or dead, is entirely coincidental.”