Today is the 82nd birthday of outrageous comedian and prolific confetti thrower Rip Taylor. He was the host of the $198 Beauty Show. The show was crazy and I have no idea the point of this show, but it is hilarious and the 1970’s. The world is a better place because he is in it. 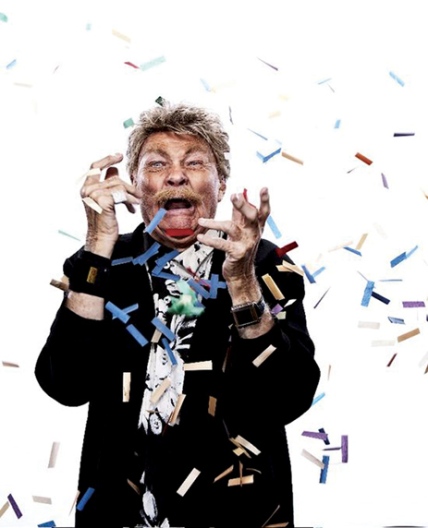 Actor, comedian. Born Charles Elmer Taylor, Jr. on January 13, 1934 in Washington, D.C. Rip Taylor was a page in the U.S. Senate before being conscripted into the Army to serve in the Korean War. After he returned home, he got his start in entertainment as a stand-up comic. What began as a gimmick/tacky costumes, ridiculous props, a handlebar mustache, wacky wigs and manic confetti tossing would become his calling card.

During the 1960s and ’70s, Rip Taylor made regular guest appearances on variety shows for such comedic stars as Jackie Gleason, Phyllis Diller and Bobby Darin. The silly, befuddled comedian then found his ideal audience in children and was soon lending his voice for such cartoons as Popeye and The Addams Family. He also became known as the host for The $1.98 Beauty Show, a beauty pageant parody.

Rip Taylor has also appeared in films, and is probably best remembered for his appearance as a celebrity funeral guest in the cult comedy classic Amazon Women on the Moon. Other films include Wayne’s World 2, Jackass: The Movie and Jackass: Number Two.