Today is Cary Grant’s 112th birthday.  It is no secret I love Cary Grant. I long to have a mid-century mid-atlantic accent, to have effortless style, and to have a wit as sharp as my wardrobe. He is what everything a woman wants to have and everything a man wants to be.  Some of my favorite Cary Grant movies are The Awful Truth, Bringing up Baby, Holiday, His Girl Friday, The Philadelphia Story, Arsenic and Old Lace, Notorious, The Bachelor and the Bobby-Soxer, Mr. Blandings Builds His Dream House, People Will Talk, To Catch a Thief, Houseboat, North by Northwest, That Touch of Mink, Charade, and Father Goose.  I know, that is a long list and contains most of his movies, I said I love him. The world is a better place because he was in it and still feels the loss that he has left. 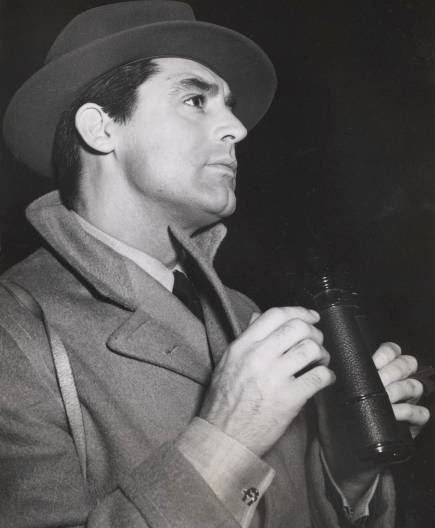 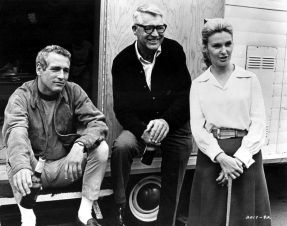 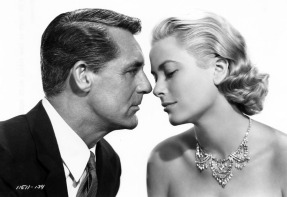 BEST KNOWN FOR: Actor Cary Grant performed in films from the 1930s through the 1960s. He starred in several Hitchcock films, including the 1959 hit North by Northwest.

Nominated twice for the Academy Award for Best Actor, for Penny Serenade (1941) and None But the Lonely Heart (1944), and five times for a Golden Globe Award for Best Actor, Grant was continually passed over, and in 1970 was given an Honorary Oscar at the 42nd Academy Awards. Frank Sinatra presented Grant with the award, “for his unique mastery of the art of screen acting with the respect and affection of his colleagues”.

I’ve often been accused by the critics of being myself on the screen. But being oneself is more difficult than you’d suppose.

Grant was a favorite of Hitchcock, who called him “the only actor I ever loved in my whole life”. Besides Suspicion, Grant appeared in the Hitchcock classics Notorious (1946), To Catch a Thief (1955) and North by Northwest (1959). Biographer Patrick McGilligan wrote that, in 1965, Hitchcock asked Grant to star in Torn Curtain (1966), only to learn that Grant had decided to retire after making one more film, Walk, Don’t Run (1966); Paul Newman was cast instead, opposite Julie Andrews.

In the mid-1950s, Grant formed his own production company, Granart Productions, and produced a number of movies distributed by Universal, such as Operation Petticoat (1959), Indiscreet (1958), That Touch of Mink (co-starring with Doris Day, 1962), and Father Goose (1964). In 1963, he appeared opposite Audrey Hepburn in Charade. His last feature film was Walk, Don’t Run three years later, with Samantha Eggar and Jim Hutton.

American Masters Online presents a sampling of witticisms, one liners, and knock-out dialog from Cary Grant, the characters he played, and some of his best known co-stars.

BRINGING UP BABY
David Huxley: Now it isn’t that I don’t like you, Susan, because, after all, in moments of quiet, I’m strangely drawn toward you, but – well, there haven’t been any quiet moments.

THE PHILADELPHIA STORY
C. K. Dexter Haven: Sometimes, for your own sake, Red, I think you should’ve stuck to me longer.
Tracy Lord: I thought it was for life, but the nice judge gave me a full pardon.
C. K. Dexter Haven: Aaah, that’s the old redhead. No bitterness, no recrimination, just a good swift left to the jaw.

NORTH BY NORTHWEST
Roger Thornhill: Now you listen to me, I’m an advertising man, not a red herring. I’ve got a job, a secretary, a mother, two ex-wives and several bartenders that depend upon me, and I don’t intend to disappoint them all by getting myself “slightly” killed.

CHARADE
Regina Lampert: I already know an awful lot of people and until one of them dies I couldn’t possibly meet anyone else.
Peter Joshua: Well, if anyone goes on the critical list, let me know.

CARY GRANT ON CARY GRANT
“I pretended to be somebody I wanted to be until finally I became that person. Or he became me.”

“My formula for living is quite simple. I get up in the morning and I go to bed at night. In between, I occupy myself as best I can.”

WHY HE’S A STYLE ICON

Selecting Cary Grant as a style icon is hardly groundbreaking. He’s considered by many to be the most influential dresser of all time. However, this dashing leading man wasn’t born on Hollywood’s red carpet. It all started when an uneducated Archibald Leach from working-class Bristol became a troupe-touring teenage stilt-walker in the U.S. and decided to permanently leave England behind to pursue a stateside stage career. Naturally, good looks didn’t hurt his case for being written into history’s fashion annals. However, it takes real bravado to completely reinvent yourself. Grant realized that in order to transform from a peon into a prince, he needed not only to change his name, but also to dress the part.

Grant’s initial fashion inspiration was fellow style icon Fred Astaire whose look was defined by bold, bright colors as well as an expert integration of the casual with the formal. In the end, you would be hard-pressed to find two men more opposite on the style spectrum. Grant eventually developed a subdued, monochromatic aesthetic where the focus was on fit and proportion rather than quirky color. The lines of his suits, shirts and shoes all blended together in harmony to draw your eye to the real moneymaker: his movie-star face. But like everyone else, Grant had some serious flaws, like a broad neck and oversize head. He often wore shirt collars turned up to disguise his neck, and his suits and topcoats were tailored with padded shoulders that were wide-set and squared-off to match the proportion of his massive mug. Turning flaws into fashion: that’s what sets Grant apart from everyone else.

You don’t need celebrity looks to learn a thing or two from Cary Grant. His sense of style is so revered that an entire book Cary Grant: A Celebration of Style is devoted to discussing it. You have to ask yourself: What could a man who became famous over half a century ago teach the modern guy about how to dress today? In short; everything. Cary Grant is a style icon because he is timeless and perhaps more relevant than ever in an age where slovenliness and bad behavior can lead to fame. Grant was definitely a suit-and-tie guy, and even his casual looks often included an ascot. However, every man — yes, even the bad boys — should own at least one good suit like the Topman Special Edition Grey Suit. Forget about color and pattern and look for a suit that simply fits your frame. A slimmer-cut jacket with equally trim trousers makes just about every guy look like a star regardless of the size and shape nature gave you. Grant typically opted for a single, inverted pant pleat, but a flat-front trouser is optimal for looking fit even if you’re lugging around a few extra pounds. Grant also wore his jacket sleeves high to expose about ¾ of an inch of bright white cuff. It’s a subtle detail, but striking enough that it almost reads as an accessory. It’s the mark of someone who truly understands fit and fine tailoring, and Grant did it all before celebrity stylists even existed.