Today is the 62nd birthday of Patricia Hearst.  I adore this photo, it has done time as both computer and phone wallpapers and I think I have even thrown it in a few calendars I have made.  They just do not do heiress mug shots like this anymore, and that truly saddens me. The world is a better place because she is in it. 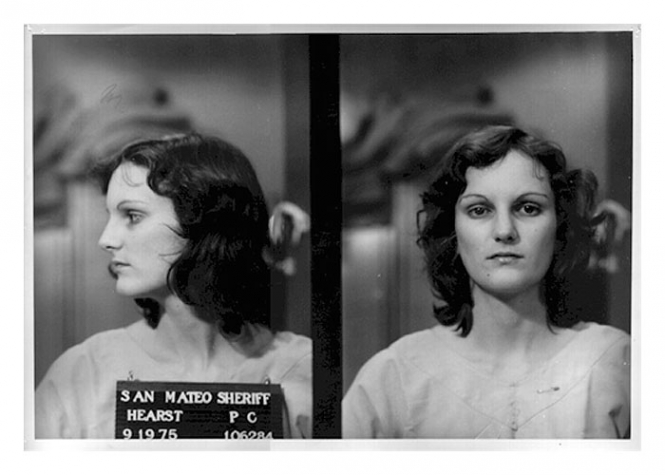 BEST KNOWN FOR: The granddaughter of 19th century media mogul William Randolph Hearst, Patty Hearst was kidnapped by the Symbionese Liberation Army in 1974. She spent 19 months with her captors—joining them in criminal acts soon after her kidnapping—before she was captured by the FBI.

Patty Hearst was born Patricia Campbell Hearst on February 20, 1954, in Los Angeles, California. She is the granddaughter of William Randolph Hearst, the famous 19th century newspaper mogul and founder of the Hearst media empire, and the third of five daughters born to Randolph A. Hearst, William Hearst’s fourth and youngest son. Following her high school graduation, Hearst attended Menlo College and the University of California at Berkeley.

On February 4, 1974, at the age of 19, Patty Hearst was taken hostage by members of the Symbionese Liberation Army, who aimed to garner a hefty ransom from her wealthy father. In a strange turn of events, two months after she was taken captive, Hearst recorded an audiotape that would soon be heard around the world, announcing that she had become part of the SLA. In the months that followed, more tapes with Hearst speaking were released by the group, and the young woman had begun actively participating in SLA-led criminal activity in California, including robbery and extortion—including an estimated $2 million from Hearst’s father during her months in captivity.

On September 18, 1975, after more than 19 months with the SLA, Hearst was captured by the FBI. In the spring of 1976, she was convicted of bank robbery and sentenced to 35 years in prison. Hearst would serve less than two years, however; she was released in 1979, after President Jimmy Carter commuted her prison term.

Hearst’s experience with the SLA, particularly the details of her transition from victim to supporter, has sparked interest for the past several years, including countless psychological studies both inspired and bolstered by her story. The shift in Hearst’s behavior with the SLA has been widely attributed to a psychological phenomenon called Stockholm syndrome, in which hostages begin to develop positive feelings toward their captors, an effect thought to occur when victims’ initially frightening experiences with their kidnappers are later countered with acts of compassion or comradery by those same individuals.