Today is the 123rd birthday of the artist Joan Miro.  I was first introduced to his work in the college library.  I did take Art History classes, so it could have actually been course-related, instead of my usual library extra curricular “studying.”  I was drawn to his vibrant colors and primitive and almost abstract characters.  His work has influenced generations of artist and empowered them to depict the world a bit differently.  The world is a better off place because he was in it and still feels the loss that he has left.

Born to the families of a goldsmith and a cabinet-maker, he grew up in the Barri Gòtic neighborhood of Barcelona.[2] His father was Miquel Miró Adzerias and his mother was Dolores Ferrà. He began drawing classes at the age of seven at a private school at Carrer del Regomir 13, a medieval mansion. In 1907 he enrolled at the fine art academy at La Llotja, to the dismay of his father. He studied at the Cercle Artístic de Sant Lluc and he had his first solo show in 1918 at the Dalmau Gallery, where his work was ridiculed and defaced. Inspired by Cubist and surrealist exhibitions from abroad, Miró was drawn towards the arts community that was gathering in Montparnasse and in 1920 moved to Paris, but continued to spend his summers in Catalonia.

After overcoming a serious bout of typhoid fever in 1911, Miro decided to devote his life entirely to painting by attending the school of art taught by Francesc Galí. He studied at La Lonja School of Fine Arts in Barcelona, and in 1918 set up his first individual exhibition in the Dalmau Galleries, in the same city. His works before 1920 (the date of his first trip to Paris) reflect the influence of different trends, like the pure and brilliant colors used in Fauvism, shapes taken from cubism, influences from folkloric Catalan art and Roman frescos from the churches. 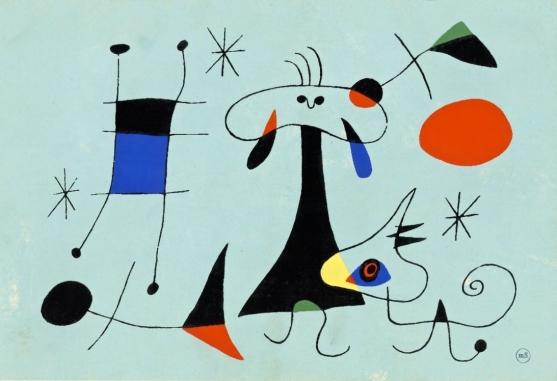 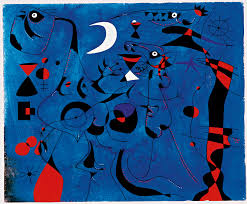 His trip to Paris introduced him to and developed his trend of surrealist painting. In 1921, he showed his first individual exhibition in Paris, at La Licorne Gallery. In 1928, he exhibited with a group of surrealists in the Pierre Gallery, also in Paris, although Miró was always to maintain his independent qualities with respect to groups and ideologies.

From 1929-1930, Miró began to take interest in the object as such, in the form of collages. This was a practice which was to lead to his making of surrealist sculptures. His tormented monsters appeared during this decade, which gave way to the consolidation of his plastic vocabulary. He also experimented with many other artistic forms, such as engraving, lithography, water colors, pastels, and painting over copper. What is particularly highlighted from this period, are the two ceramic murals which he made for the UNESCO building in Paris (The Wall of the Moon and the Wall of the Sun, 1957-59).
Joan Miro UNESCO Mural- “The Moon and The Sun”

It was at the end of the 60´s when his final period was marked and which lasted until his death. During this time, he concentrated more and more on monumental and public works. He was characterized by the body language and freshness with which he carried out his canvasses, as well as the special attention he paid to material and the stamp he received from informalism. He concentrated his interest on the symbol, not giving too much importance to the representing theme, but to the way the symbol emerged as the piece of work. Miro had a very eccentric style that is the embodiment of his unique approach to his artwork.

In 1976 the Joan Miró Foundation Centre of Contemporary Art Study was officially opened in the city of Barcelona and in 1979, four years before his death, he was named Doctor Honoris Causa by the University of Barcelona.

He said, “For me an object is something living. This cigarette or this box of matches contains a secret life much more intense than that of certain human beings. “