Today is the 73rd birthday of Edie Sedgwick. She died 45 years ago. Strange to think.  She will always be young.  I am not exactly sure why It Girls tend to end up cautionary tales of what happens when you fly to close to the sun, but they do. Maybe in order to be an It Girl, it requires quite a bit of excess (money, drugs, alcohol, etc) and it is hard to get away from those things without scars. Whatever the reason, she was irreverent, insolent, and gorgeous. The world is a better place because she was in it and still feels the loss that she has left.

BEST KNOWN FOR: Edie Sedgwick was a socialite and model who became a muse to Andy Warhol in the 1960s.

Edie Sedgwick was born on April 20, 1943, in Santa Barbara, California, as the seventh child for parents Alice Delano de Forest and Francis Minturn “Duke” Sedgwick. She was named after her father’s favorite aunt, Edith Minturn Stokes. Both of her parents came from elite families, so Edie’s early life was one of significant wealth and highborn connections. But it was also a life full of eccentricities, dark secrets, and a history of mental illness.

Edie’s father had long struggled with both physical and mental health issues; he was born with an umbilical hernia and, as a child, developed asthma as well as a nearly fatal bone infection, known as osteomyelitis. Francis also landed in and out of psychiatric units throughout his teenage years, receiving diagnoses for both manic-depressive psychosis and “nervous breakdowns.” Because of his delicate health, his dreams of becoming a railroad tycoon after graduating from Harvard Business School were dashed. Instead, on the advice of doctors, he focused on his sculpting talents, and became a professional artist. 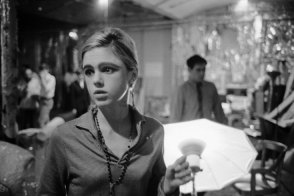 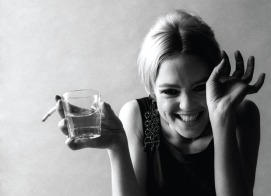 Edie’s mother was, by all accounts, painfully shy and very much in love with Francis. She was incredibly supportive of Francis’ delicate mental and physical conditions, and visited him often while he was hospitalized. When the couple became engaged, doctors recommended that Francis and Alice bear no children because of Francis’ health issues. They ignored all medical advice, however, welcoming eight children over the next 15 years. “My mother had a difficult time with the births of her last children, but she kept getting pregnant anyway,” Edie’s oldest sister, Alice “Saucie” Sedgwick, later revealed. “When Edie was born she nearly died…I have no idea why [my mother] went on having children when it was so dangerous to her.”

Despite Alice’s struggles in giving birth to Edie, Francis encouraged his wife to continue expanding the family—partly in the hopes of having more boys and, according to Saucie, partly because he liked the idea of “producing a spectacular number of children.” But Edie and her siblings didn’t remember their father or mother as loving the practical aspects of raising children. Instead, they were handed off to a series of nannies and governesses to be reared during their winters in Cold Spring Harbor on Long Island, and summers at their parents’ home in Santa Barbara.

It was also around the time of Edie’s birth that Francis developed a wandering eye, and began a string of adulterous affairs. “At one of my parents’ parties, I saw my father disappear into the bushes, right in front of my mother, with his arm around a woman—just traipsed off into the bushes in front of fifty people,” Edie’s sister, Saucie, revealed. But Alice never batted an eyelash—at least in public. “She didn’t take her frustration and anger at my father’s affairs out on the children,” Edie’s brother, Jonathan, said. “She’d get allergies and needed special diets.”

Edie’s parents only grew more distant from each other once they moved to Corral de Quati, a 3,000-acre ranch in California, which they purchased after Edie’s father was rejected from the military due to his failing health. He later told the family that he intended to raise cattle there, to support the efforts of WWII. Once they’d settled onto the ranch, Edie’s father began to behave strangely, distancing himself from the family and becoming “icy and remote,” while her mother became “cautious and reserved.”

Once on Corral de Quati, Edie and her siblings were largely isolated from the outside world. She and her sisters, Kate and Suky, were housed separately from their parents with their nurse, Addie, where they were dressed in hand-me-downs and taught how to ride horses as early as 18-months of age. Edie and her siblings were also allowed to run wild on the ranch, disappearing without adult supervision for hours to watch the sun rise or play games they invented.

But once they were home, they were under the oppressive rules of the East coast society life that they had come from. The Sedgwick children were educated in a private school constructed on the ranch, and taught a curriculum endorsed by their father. “We were taught in a weird way, so that when we got out into the world we didn’t fit anywhere; nobody could understand us,” Edie’s brother, Jonathan Sedgwick, would later admit. “We learned English the way the English do, not Americans.”

The tension in the house was unbearable, and the children all began turning inward. Suky would later recall how the isolated life of Corral de Quati began taking a toll on Edie as a small child. “[Edie] would be turmoiling over some useless and absolutely nonsensical detail,” Suky later recalled. “I began to realize that Edie had times when she wasn’t totally herself. She couldn’t escape from it either. I knew it wasn’t her fault, but I didn’t know what the hell it was.” Edie would later admit that her father had pressured her sexually at an early age, claiming that he attempted to sleep with her, “from the age of about seven on.” She also said that one of her brothers had insisted that, “a sister and brother should teach each other the rules and the game of making love; and I wouldn’t fall for that either.”

By the time she was 13, Edie was coping with the pressures of her domineering father and her subservient mother through anorexia and bulimia. Sent away to board at the prestigious Katharine Branson School, Edie returned home shortly into the school year after teachers discovered her eating disorder. Edie’s return home was particularly destructive for her; her father often locked her in her room and forced her to stay heavily medicated, on bed-rest. Her mother began babying her as well, providing her with whatever she wanted. Several of her siblings recounted Edie’s regression to infancy, noticing her baby talk and child-like play.

During her convalescence, Edie walked in on her father having a sexual affair. To quiet his shocked daughter, Francis assaulted her, and began denying the incident. He then had a doctor come to the house several hours later to tranquilize his daughter, so that she couldn’t talk about the incident. “She lost all her feelings because everything around her was an act now,” her brother Jonathan said. “She knew what had really happened, and my father just denied the whole thing. And that really hurt her.”

In 1958, Edie was shipped off to another private school, St. Timothy’s, in Maryland. Her stay only lasted a year, before her parents noticed her mental and physical health was slipping again. At her father’s insistence, she was sent to Silver Hill, a mental health facility, in 1962, which was more like a country club than a hospital. When Edie’s condition worsened—she dropped to 90 pounds—she was sent to the closed ward of Bloomingdale, the Westchester Division of New York Hospital. “When I was in the hospital, I was very suicidal in a kind of blind way, ” Edie later said of her time in Bloomingdale. “I didn’t want to turn out like my family showed me…I wasn’t allowed to associate with anyone. Oh, God. So I didn’t want to live.”

To add to her struggles, Edie discovered she was pregnant from an affair she had off-campus with a Harvard student. She decided to have an abortion, citing her psychological issues as a reason not to have the child. She left Bloomingdale shortly after, to study art at Cambridge, in 1963.

During this time, her older brother Minty was also bouncing in and out of psychiatric wards with his own issues. In 1964, a day before his 26th birthday, Minty hanged himself. It was later revealed that Minty had confessed his homosexuality to his father, who then attempted to force him into heterosexuality. Edie was devastated by the loss. But she would experience more heartbreak shortly after, when her brother Bobby suffered a nervous breakdown. His mental health would gradually deteriorate, until he slammed his bike into a New York City bus on New Year’s Eve, 1964. He died on January 12, 1965. He was 31 years old at the time of his death.

Edie moved to New York in 1964, shortly after receiving an $80,000 trust fund from her maternal grandmother, whom she lived with upon entering the city. With aspirations to become a model, she began taking dance classes, tried out for modeling gigs, and attended high society events. By the fall, she had moved out on her own, to a place on East 64th Street, which her parents furnished, and spent nearly every night partying with her Harvard friends. By March of 1965, Edie had met Andy Warhol, who ran a salon he called The Factory.

At the Factory, Edie reinvented herself, becoming a performance artist and Warhol’s film muse. Together, Edie and Andy created 18 films, including the beginnings of a film with Bob Dylan and his friend Bob Neuwirth. During this time, Edie began a romantic relationship with Neuwirth, who she would later refer to as the love of her life. But she also had a brief flirtation with Dylan, who wrote several songs about the would-be star, including “Just Like a Woman” and “Leopard-Skin Pill-Box Hat.”

By 1965, however, Warhol and Sedgwick’s relationship had become strained. Edie had seen no financial remuneration from her work with Warhol, and asked Warhol to stop showing her films in public. Attempting to start a legitimate film career, she nearly signed with Dylan’s manager, but then disappeared from the scene completely.

While rumors swirled about the real reason Sedgwick hid from the public eye, the general consensus was that she had completely succumbed to drugs. Sources debate the types of drugs, but many believe she was abusing prescription drugs, as well as heroin and speed. Her parents again attempted to admit her to a psychiatric ward after she burned her apartment down in 1966, but she was out again quickly. Neuwirth, unable to deal with Sedgwick’s drug use, broke off the relationship in 1967.

Edie’s father died of pancreatic cancer in 1967. In April of 1968, Edie nearly died of an overdose, but managed to survive the incident. She returned home in 1968 to stay with her mother, and began undergoing shock therapy later that year.

By 1971, Edie had begun toying with the idea of domestic life, and on June 24, 1971, was married to Michael Post, a fellow patient at Cottage Hospital, where she had been admitted when she returned to California in 1968. The couple tied the knot on the Sedgwick family ranch, Laguna.

Four months later, on November 16, 1971, Sedgwick died. She had suffocated in her sleep, facedown in her pillow, at the age of 28. Friends would later reveal that she suspected she was pregnant and, the night she died, had told Post that she planned to leave him. Even at the very end of her life, she had planned to make a big return to stardom. The chance never came.