Today is the 134th birthday of the artist Edward Hopper.  I was first introduced to his art in that same college library where I read everything by the Lost Generation.  His artwork fit into the same time period and elicited that underlying feeling of lonliness and being set apart from your surroundings.  The world is a better place because he was in it and still feels the loss that he has left. 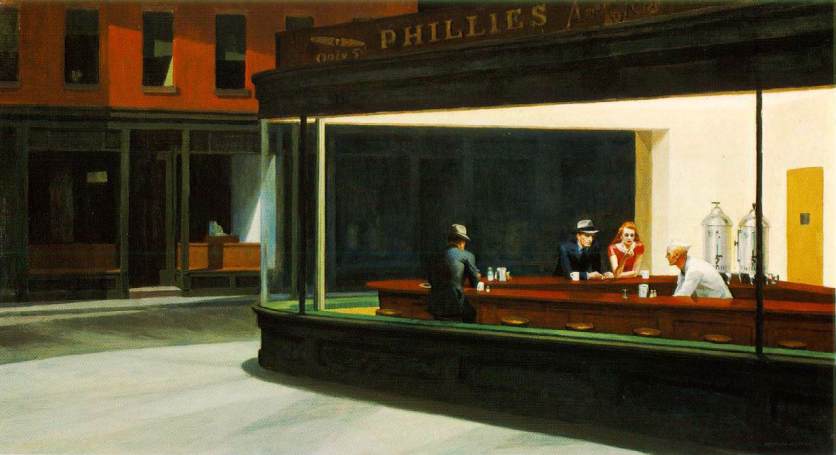 BEST KNOWN FOR: Artist Edward Hopper is the painter behind the iconic late-night diner scene Nighthawks (1942).

Edward Hopper was born in 1882, in NY, into a middle class family, which encouraged the art work and career that he wanted to pursue. From 1900 to 1906 he studied at the NY School of Art, and while in school, shifted from illustration to works of fine art. Upon completing his schooling, he worked as an illustrator for a short period of time; once this career path ended, he made three international trips, which had a great influence on the future of his work, and the type of art he would engage in during the course of his career. He made three trips to Europe between 1906 and 1910. In retrospect, Europe meant France, and more specifically, Paris, for Edward Hopper. This city , its architecture, light, and art tradition, decisively affected his development.

When he arrived in 1906, Paris was the artistic center of the Western world; no other city was as important for the development of modern art. The move toward abstract painting was already underway; Cubism had begun. There, in 1907, Picasso painted his legendary Les Demoiselles d’Avignon. Hopper, however, later maintained that when he was in Paris he never heard of Picasso, who was to become so important for the development of modern literature. For Hopper, the encounter with Impressionism was decisive. The light in these paintings and the thematic treatment of architecture and nature particularly attracted him and were to influence all of his work. His reaction to the Impressionists is directly reflected in his own art. He forgot the dark, Old Master-like interiors of his New York student days, when he was influenced mainly by the great European artists – Goya, Caravaggio, El Greco, and Diego Velazquez. The influence of Impressionists, like Paul Cezanne, Claude Monet, Edouard Manet, is directly reflected in his own art. His palette lit up and he began to paint with light and quick strokes. Even in 1962, he could say, “I think I’m still an Impressionist.”
In 1910 Hopper returned to the United States, never to leave North America again. During the 1910s, Edward Hopper struggled quite a bit to gain any recognition for the works he had created. During this period a number of his works were distributed through various shows and exhibits in New York, but very little, if any attention, was given to his pieces. Oil painting was a focal point of the work he had done, but a majority of the sales he made during this period, was for works he had created doing etching work and murals.

At the age of 37, Edward Hopper received his first open invitation to do a one person exhibit, featuring some of this finest pieces of art. 16 pieces of his work were shown at the Whitney Club, and although none of the pieces were sold at this exhibit, it did point his career in a new direction, it got his art work out to the general public, and he became a more notable name in the type of work and the art forms which he most wanted to focus his career on, for the future works he would create.

A few years later, Edward Hopper found his career had taken a turn for the better, and he was doing well in sales, and financially with the works he had created. He was invited to do a second one person exhibit, to feature new works, and to create a buzz about the work he had created in recent years. The Frank KM Rehn Gallery in NYC, was where this second exhibit took place, and it received far more attention and a much larger crowd, due to the location where the exhibit was taking place, and also because of the fact that more people were now aware of the works Edward Hopper had created.

House by the Railroad, was a famous painting created by the artist, which was the first work to be acquired for the Museum of Modern Art, which had only recently been opened for general viewing. Strongly defined lighting, clearly defined lines, and cropped viewpoints, were some of the features which this art work captured; and, this embodied the style in which Edward Hopper would use later on in his career, and with the future works that he would produce during the course of his career as an artist.

In 1923, Edward Hopper married a fellow student who attended the NY Academy where he got his education, Josephine Nivision. Not only did she pose for nearly half of the female figure pieces which he created during his career, she also encouraged and pushed him to engage in different art forms during his career as well. She pushed him to work with water colors, and she kept records of all the pieces he designed, the exhibits he was to be a part of, and all of the sales of the pieces which were made, during these exhibits in which his work was presented.

In 1933, Edward Hopper received further praises for the works he had done, and for a piece that was on exhibit at the Museum of Modern Art. His highly identifiable style, and mature painting styles, were some things he had become known for during this period. The gorgeous landscapes, the quiet rooms and empty rooms he designed, and the transitory effect which many of his works posed, created a sense of contemporary life and a new style, which many in the art world recognized, and many praised him for this distinct style he had created in his art forms.

In Edward Hopper’s most famous piece, Nighthawks, there are four customers and a waiter, who are in a brightly lit diner at night. It was a piece created during a wartime; and many believe that their disconnect with the waiter, and with the external world, represent the feelings of many Americans during this period, because of the war. The piece was set up in 1942, in the Art Institute of Chicago, and was seen by many people while it was on exhibit for a show.

Between the 1930s and 1950s, Edward Hopper and his wife spent quite a bit of time, and most of their summers, visiting Cape Cod, Massachusetts. In many of the works that Hopper created during this period, many of the scenes, the common locations, and nearby attractions which they visited, were often seen in the art forms that he created during his career. He also started to travel further out, and visited regions from Vermont out to Charleston, in order to add more new points of interest to his collection, and to broaden the works and the locations which he would include in many of the images that he created over the course of his career.

Later in his career, many of his works were displayed in various exhibits, namely at the Whitney Museum, which was located in New York City. Later in his career, during the 1940s, was a period in which he found the most commercial success. But, soon after, and even during this time period, he began losing critical favors. This was namely due to the new forms of art, and the fact that abstract pieces were beginning to enter the art world, which took over the work he did, as well as the work of many famous artists prior to him.

His choices of subject matter – particularly the places he painted – seem to have been somewhat unpredictable, since they were part of his constant battle with the chronic boredom that often stifled his urge to paint. This is what kept Hopper on the move – his search for inspiration, least painfully found in the stimulation of new surroundings. As he explained to one critic:

“To me the most important thing is the sense of going on. You know how beautiful things are when you’re traveling.”

In the 1940s and 1950s, Hopper found himself losing critical favor in the wake of Abstract Expressionism. Among the new vanguard art movement emerged in the early 1940s, artists such as Willem de Kooning, Jackson Pollock and Mark Rothko advanced audacious formal inventions in a search for significant content. By breaking away from accepted conventions in both technique and subject matter, those artists made monumentally scaled works that stood as reflections of their individual psyches, and attempted to tap into universal inner sources. Even during this era of national prosperity and cultural optimism, Edward Hopper’s art continued to suggest that the individual could still suffer a powerful sense of isolation in post-war America. Hopper never lacked popular appeal, however, and by the time of his death in 1967, Hopper had been reclaimed as a major influence by a new generation of American realist artists. 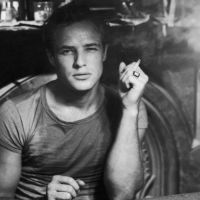 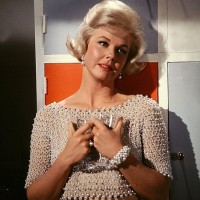