Today is the 94th birthday of Yvonne DeCarlo.  Reinvention.  I love it.  There are risks and challenges, but also great rewards.  One being the confusion of others.  It is not only in Hollywood that people get typecast.  People love to attach quick descriptors to people, to categorize them for easy processing.  When you do something that appears to be out of character, it messes with people’s heads and is brilliant.  Moses’ mother and Lilly Munster?  What?  That is the same women?  The world is a better place because she was in it and still feels the loss that she has left. 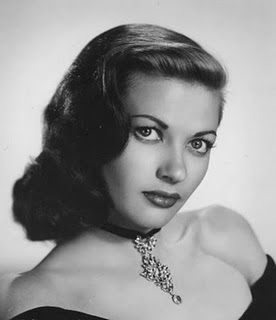 BEST KNOWN FOR: Actress Yvonne DeCarlo was Moses’ wife in DeMille’s The Ten Commandments, but is better known for playing the matriarch on TV’s The Munsters.

Actress Yvonne De Carlo was born Peggy Yvonne Middleton on September 1, 1922, in Point Grey (now Vancouver), British Columbia, Canada. She was the sole child born to Marie Middleton, who was only 17 when her husband deserted her and their daughter. Marie supported Yvonne’s decision to drop out of high school and pursue a career as an entertainer.

In order to alleviate her family’s financial troubles, Yvonne spent most of her teens performing in nightclubs and on stage. Needing a new name to accompany her budding career, she used her mother’s maiden name, and was thereafter billed as Yvonne De Carlo.

De Carlo and her mother sought greater opportunities in the United States and, in 1940, they settled in Los Angeles, California. A year later, the ambitious actress caught the attention of Paramount Studios, who signed her to a weekly contract. Like many newcomers, she found herself in a number of minor (and sometimes uncredited) roles in the films Road to Morocco (1942), as well as For Whom the Bell Tolls and The Deerslayer (both 1943).

In 1945, Universal took notice of the alluring actress and cast her as the lead in Salome, Where She Danced, a Technicolor Western. The film was forgettable, but De Carlo’s performance as an exotic dancer turned spy earned her the recognition she sought. Similar seductive roles followed in the Song of Scheherazade and Slave Girl (both 1947). De Carlo’s projects during the ’40s bolstered her visibility, but at the same time, limited her roles to that of a sultry screen vixen. 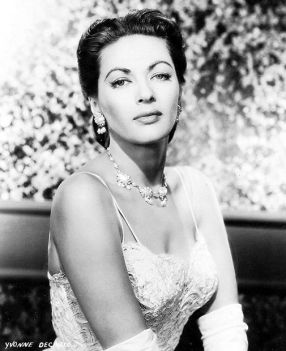 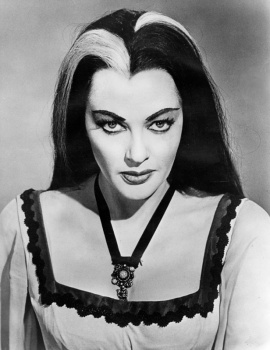 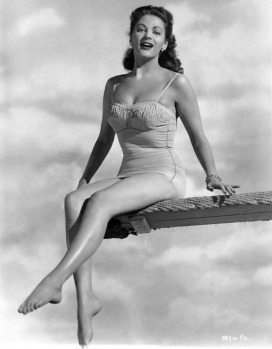 Following a few disappointing features with Universal, the studio failed to see a future for De Carlo. They terminated her contract, after which her work consisted mainly of unremarkable Westerns, including Scarlet Angel (1952) with Rock Hudson, and Shotgun (1955). However, she surprisingly turned in good comedic performances in the British-made Hotel Sahara (1951) and The Captain’s Paradise (1953), co-starring Sir Alec Guinness.

The year 1956 defined a turning point in De Carlo’s career when she was cast in Cecil B. DeMille‘s landmark production of The Ten Commandments. De Carlo’s performance as Moses’ wife Sephora, opposite Hollywood icons Charlton Heston and Yul Brynner, marked a place for her in films. Her next project paired her with Clark Gable and Sidney Poitier in the flat costume epic Band of Angels (1957).

In the early 1960s, De Carlo starred in a string of B-features, which inspired little interest in audiences. With the demise of her film career, the struggling actress made a transition to the small screen. In 1964, she was chosen to play the ghoulish mom in a pilot for CBS. Her portrayal of Lily Munster in the horror-spoof sitcom The Munsters (1964-’66) marked her television debut, and introduced her to a whole new generation of audiences.

In the early 1970s, the middle-aged actress found renewed success in the Stephen Sondheim Broadway musical Follies (1971). Eventually, she settled into a routine of lowbrow comedy—Won Ton Ton, the Dog Who Saved Hollywood (1976)—and horror films, such as Satan’s Cheerleaders (1977), Silent Scream (1980) and Vultures (1983).

De Carlo continued to appear in occasional films throughout the 1980s and 1990s. In 1987, she published an autobiography, titled Yvonne. Most recently, she made a guest appearance in the television movie Here Come the Munsters (1995).

In 1955, De Carlo married Hollywood stuntman, Robert Morgan, who lost his leg while filming How the West Was Won (1963). The couple had two sons, Bruce and Michael, before they divorced in the mid-1970s. De Carlo, indelibly identified with the character Lily Munster—the vampirelike matriarch of the TV sitcom family The Munsters, died of heart failure on January 8, 2007 at age 84.