Today is Picasso’s 135th birthday.  He died 42 years ago at the impressive age of 91.  A long life only matched by his long long full name:  Pablo Diego José Francisco de Paula Juan Nepomuceno María de los Remedios Cipriano de la Santísima Trinidad Clito Ruiz y Picasso.  He was part of that group of friends back in the 20’s that I became madly fascinated with, that Lost Generation.  Only, he managed to get through it and continue.  Take some time to view his work today and remember that life is more vibrant than you think and perspective is different for everyone.  Jump start your morning and recharge yourself and remember that beauty is everywhere as long as you don’t rush past it.  The world is a better place because he was in it and still feels the loss that he has left. 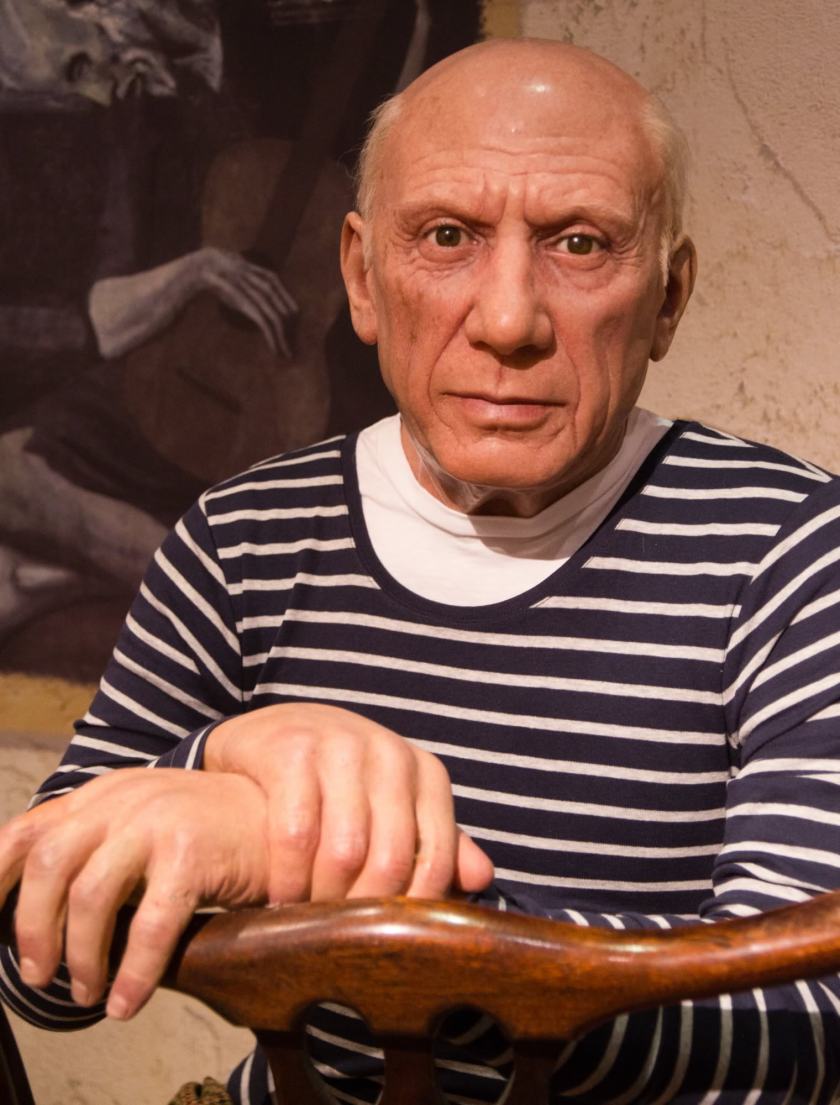 Best Known For:  Spanish expatriate Pablo Picasso was one of the greatest and most influential artists of the 20th century, and the co-creator of Cubism.

Born October 25, 1881 in Málaga, Spain. Picasso’s gargantuan full name, which honors a variety of relatives and saints, is Pablo Diego José Francisco de Paula Juan Nepomuceno María de los Remedios Cipriano de la Santísima Trinidad Clito Ruiz y Picasso. Picasso’s mother was Doña Maria Picasso y Lopez and his father was Don José Ruiz Blasco, a painter and art teacher. A serious and prematurely world-weary child, the young Pablo Picasso possessed a pair of piercing, watchful black eyes that seemed to mark him out for greatness. He remembered, “When I was a child, my mother said to me, ‘If you become a soldier, you’ll be a general. If you become a monk you’ll end up as the pope.’ Instead I became a painter and wound up as Picasso.”

Although he was a relatively poor student, Picasso displayed a prodigious talent for drawing from a very young age. According to legend, his first words were “piz, piz,” his childish attempt at lápiz, the Spanish word for pencil. Picasso’s father began teaching him to draw and paint from early childhood, and by the time he was 13 years old his paintings were already better executed than his father’s. He lost all desire to do any schoolwork and instead spent the school days doodling in his notebook. Picasso recalled, “for being a bad student, they would send me to the ‘cells’& I loved it when they sent me there, because I could take a pad of paper and draw nonstop.”

In 1895, when Picasso was fourteen years old, his family moved to Barcelona and he immediately applied to the city’s prestigious School of Fine Arts. Although the school typically only accepted students several years his senior, Picasso’s entrance exam was so extraordinary that the school made an exception and admitted him immediately. Nevertheless, Picasso chafed at the strict rules and formalities and began skipping class to roam the streets of Barcelona, sketching the city scenes he observed.

In 1897, a 16-year-old Picasso moved to Madrid to attend the Royal Academy of San Fernando. However, he again grew frustrated at the school’s singular focus on classical subjects and techniques. He wrote to a friend, “They just go and on& about the same old stuff: Velazquez for painting, Michelangelo for sculpture.” Again he started skipping class to wander the city and paint what he observed: gypsies, beggars, prostitutes.

In 1899, Picasso moved back to Barcelona and fell in with a crowd of artists and intellectuals who made their headquarters at a café called El Quatre Gats, the four cats. Inspired by the anarchists and radicals he met there, Picasso made his decisive break with the classical methods in which he had been trained and began a lifelong process of experimentation and innovation.

At the turn of the twentieth century, Picasso moved to Paris, the cultural center of European art,  to open his own studio. Art critics and historians typically break Picasso’s adult career into distinct periods and the first of these, which lasted from 1901-1904, is called his Blue Period after the color that dominated nearly all of Picasso’s paintings during these years. Lonely and deeply depressed over the death of his close friend Carlos Casagemas, he painted scenes of poverty, isolation and anguish using almost exclusively blues and greens. The critic Charles Morice wondered, “Is this frighteningly precocious child not fated to bestow the consecration of a masterpiece on the negative sense of living, the illness from which he more than anyone else seems to be suffering?” Picasso’s most famous paintings from the Blue Period include Blue Nude, La Vieand The Old Guitarist, all three completed in 1903.

By 1905, Picasso had largely overcome his depression of the previous years. He was madly in love with a beautiful model named Fernande Olivier and newly prosperous thanks to the generous patronage of the art dealer Ambroise Vollard. The artistic manifestation of Picasso’s improved spirits was the introduction of warmer colors beiges, pinks and reds in what is known as his Rose Period. His most famous paintings from this time include Family at Saltimbanques (1905), Gertrude Stein (1905-1906) and Two Nudes (1906).

In 1907, Picasso produced a painting unlike anything he or anyone else had ever painted before, a work that would profoundly influence the direction of art in the twentieth century: Les Demoiselles d’Avignon, a chilling depiction of five beige figures, prostitutes, abstracted and distorted with sharp geometric features and stark blotches of blues, greens and grays. Les Demoiselles d’Avignon is considered the precursor and inspiration of Cubism, an artistic style pioneered by Picasso and Georges Braque.

In Cubist paintings, objects are broken apart and reassembled in an abstracted form, highlighting their composite geometric shapes and depicting the object from multiple viewpoints at once to create physics-defying, collage-like effects. At once destructive and creative, Cubism shocked, appalled and fascinated the art world. “It made me feel as if someone was drinking gasoline and spitting fire,” Braque said. The French writer and critic Max Jacob reflected, “It was really the harbinger comet of the new century.” Picasso’s early Cubist paintings, known as his Analytic Cubist works, include Three Women (1907), Bread and Fruit Dish on a Table (1909) and Girl with Mandolin (1910). Picasso’s later Cubist paintings are distinguished as Synthetic Cubism because they go further toward creating vast collages out of a great number of tiny individual fragments.  These include Still Life with Chair Caning (1912), Card Player (1913-1914), and Three Musicians (1921).

The outbreak of World War I ushered in the next great change in Picasso’s art. He grew more somber and once again preoccupied with the depiction of reality. Picasso’s works between 1918-1927 are considered his Classical Period,  a brief return to realism in a career otherwise dominated by experimentation. His most interesting and important works from this period include Three Women at the Spring (1921), Two Women Running on the Beach/The Race (1922) and The Pipes of Pan (1923).

Then, from 1927 onward, Picasso became caught up in a new philosophical and cultural movement, Surrealism, whose artistic manifestation was an offspring of his own Cubism. Picasso’s greatest surrealist painting, one of the great paintings of all time, was completed in 1937, in the midst of the Spanish Civil War. On April 26, 1937, German bombers supporting Francisco Franco’s Nationalist forces, carried out a devastating aerial attack on the Basque town of Guernica. Outraged by the bombing and the inhumanity of war, Picasso painted Guernica shortly thereafter, a surrealist testament to the horrors of war in black, white and grays, featuring a Minotaur and several human-like figures in various states of anguish and terror. Guernica remains one of the most moving and powerful antiwar paintings in history.

In the aftermath of World War II, Picasso became more overtly political. He joined the Communist Party and was twice honored with the International Lenin Peace Prize, once in 1950 and again in 1961. By this point in his life, Picasso was also an international celebrity, the world’s most famous living artist. However, while paparazzi chronicled his every move, few paid attention to his art during this time. In contrast to the dazzling complexity of Synthetic Cubism, Picasso’s later paintings use simple imagery and crude technique. Upon passing a group of school kids in his old age Picasso remarked, “When I was as old as these children, I could draw like Raphael, but it took me a lifetime to learn to draw like them.” The epitome of his later work is his Self Portrait Facing Death, drawn with pencil and crayon a year before he passed away. The autobiographical subject, who appears as something between a human and an ape, with a green face and pink hair, is drawn with the crude technique of a child. Yet the expression in his eyes, capturing a lifetime of wisdom, fear and uncertainty, is the unmistakable work of a master at the height of his powers.

Picasso was an incorrigible womanizer who had countless relationships with girlfriends, mistresses, muses and prostitutes over the course of his long life. However, he had only two wives. He married a ballerina named Olga Khokhlova in 1918, and they remained together for nine years before parting ways in 1927. He married his second wife, Jacqueline Roque, at the age of 69 in 1961. Picasso had four children: Paul, Maya, Claude and Paloma.

Pablo Picasso stands alone as the most celebrated and influential painter of the twentieth century. His technical mastery, visionary creativity and profound empathy distinguish him as a revolutionary artist. Picasso was also endlessly reinventing himself, switching between styles so radically different that his life’s work seems the product of five or six great artists rather than just one. Discussing his penchant for radical shifts in style, Picasso insisted that his career was not an evolution or progression. Rather, the diversity of his work was the result of freshly evaluating for each piece the form and technique best suited to achieve his desired effects. “Whenever I wanted to say something, I said it the way I believed I should,” Picasso said. “Different themes inevitably require different methods of expression. This does not imply either evolution or progress; it is a matter of following the idea one wants to express and the way in which one wants to express it.”

FILMOGRAPHY AS ACTOR
The Mystery of Picasso (5-May-1956) · Himself