Today is the 69th birthday of the first female president of the United States of America. 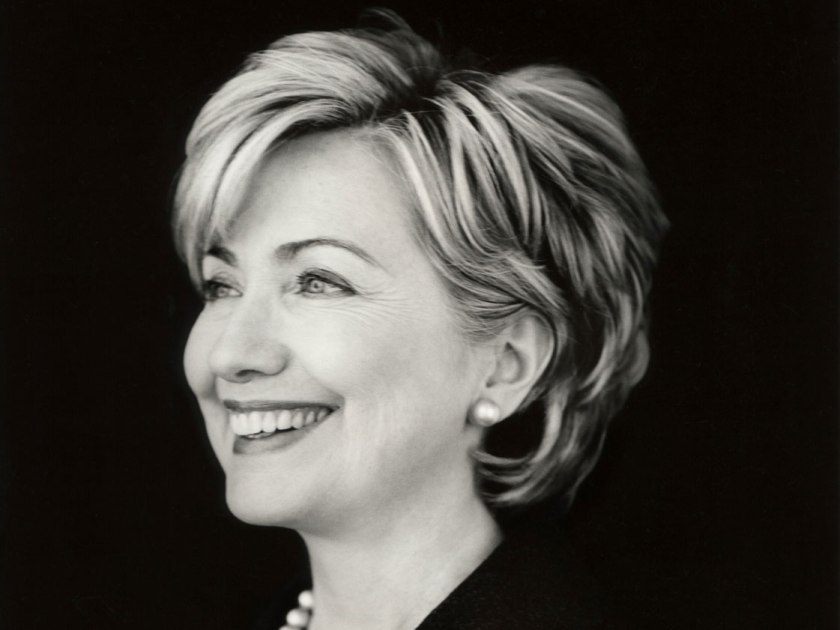 BEST KNOWN FOR: When Hillary Clinton was elected to the U.S. Senate in 2001, she became the first American first lady to ever win a public office seat. She later became the 67th U.S. secretary of state in 2009, serving until 2013. In 2016, she became the first woman in U.S. history to become the presidential nominee of a major political party.

Hillary Rodham was the eldest daughter of Hugh Rodham, a prosperous fabric store owner, and Dorothy Emma Howell Rodham; she has two younger brothers, Hugh Jr. (born in 1950) and Anthony (born in 1954).

As a young woman, Hillary was active in young Republican groups and campaigned for Republican presidential nominee Barry Goldwater in 1964. She was inspired to work in public service after hearing a speech in Chicago by the Reverend Martin Luther King Jr., and became a Democrat in 1968.

Rodham attended Wellesley College, where she was active in student politics and elected senior class president before graduating in 1969. She then attended Yale Law School, where she met Bill Clinton. Graduating with honors in 1973, she went on to enroll at Yale Child Study Center, where she took courses on children and medicine and completed one post-graduate year of study.

Clinton worked at various jobs during her summers as a college student. In 1971, she first came to Washington, D.C. to work on U.S. Senator Walter Mondale’s sub-committee on migrant workers. In the summer of 1972, she worked in the western states for the campaign of Democratic presidential nominee George McGovern.

In the spring of 1974, Rodham became a member of the presidential impeachment inquiry staff, advising the Judiciary Committee of the House of Representatives during the Watergate Scandal.

After President Richard M. Nixon resigned in August, she became a faculty member of the University of Arkansas Law School in Fayetteville, where her Yale Law School classmate and boyfriend Bill Clinton was teaching as well. 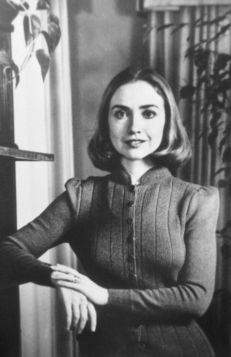 Hillary Rodham married Bill Clinton on October 11, 1975, at their home in Fayetteville. Before he proposed marriage, Clinton had secretly purchased a small house that she had remarked that she liked. When he proposed marriage to her and she accepted, he revealed that they owned the house. Their daughter, Chelsea Victoria, was born on February 27, 1980.

In 1976, Hillary worked on Jimmy Carter’s successful campaign for president while husband Bill was elected attorney general. Bill Clinton was elected governor in 1978 at age 32, lost reelection in 1980, but came back to win in 1982, 1984, 1986 (when the term of office was expanded from two to four years) and 1990.

Hillary joined the Rose Law Firm in Little Rock and, in 1977, was appointed to part-time chairman of the Legal Services Corporation by President Carter. As first lady of the state for a dozen years (1979-1981, 1983-1992), she chaired the Arkansas Educational Standards Committee, co-founded the Arkansas Advocates for Children and Families, and served on the boards of the Arkansas Children’s Hospital, Arkansas Legal Services and the Children’s Defense Fund. She also served on the boards of TCBY and Wal-Mart.

During Bill Clinton’s 1992 presidential campaign, Hillary emerged as a dynamic and valued partner of her husband, and as president he named her to head the Task Force on National Health Reform (1993). The controversial commission produced a complicated plan which never came to the floor of either house. It was abandoned in September 1994.

In 1999, Clinton decided she would seek the U.S. Senate seat from New York held by Daniel Patrick Moynihan, who was retiring after four terms. Despite early problems and charges of carpetbagging, Clinton beat popular Republican Rick Lazio by a surprisingly wide margin: 55 percent to 43 percent. Clinton became the first wife of a president to seek and win public office and the first woman to be elected to the U.S. Senate from New York. She easily won reelection in November 2006.

In early 2007, Clinton announced her plans to strive for another first—to be the first female president. During the 2008 Democratic primaries, Senator Clinton conceded the nomination when it became apparent that nominee Barack Obama held a majority of the delegate vote. When Clinton suspended her campaign, she made a speech to her supporters. “Although we were not able to shatter that highest and hardest glass ceiling this time, thanks to you it has 18 million cracks in it,” she said, “and the light is shining through like never before, filling us all with the hope and the sure knowledge that the path will be a little easier next time, and we are going to keep working to make it so, today keep with me and stand for me, we still have so much to do together, we made history, and lets make some more.”

Shortly after winning the U.S. presidential election, Obama nominated Hillary Clinton as secretary of state. She accepted the nomination and was officially approved as the 67th U.S. secretary of state by the Senate on January 21, 2009.

During her term, Clinton used her position to make women’s rights and human rights a central talking point of U.S. initiatives. She became one of the most traveled secretaries of state in American history, and promoted the use of social media to convey the country’s positions. She also led U.S. diplomatic efforts in connection to the Arab Spring and military intervention in Libya.

In June 2014, Clinton released Hard Choices, a memoir published by Simon & Schuster, which rose to number one on the New York Times Best Seller list. The following year in early March 2015, Clinton faced controversy and criticism when it was revealed that she had used her personal email address to handle official governmental business during her time as secretary of state. In a news conference held at the United Nations, speaking initially on gender equality and the political situation in Iran, Clinton stated that she had utilized her personal email for convenience as allowed by state department protocol. She later turned over all governmental correspondence to the Obama administration while deleting messages that could be construed as personal.

After much speculation and assumptions over whether Clinton would run for the U.S. presidency, her plans were made official in the spring of 2015. On April 12, Clinton’s campaign chairperson John D. Podesta announced via email that the former secretary of state was entering the race to secure the Democratic presidential nomination for the 2016 elections. This was immediately followed by an online campaign clip, with Clinton herself announcing that she was running for president.

On her campaign site, Clinton addresses a wide variety of issues she believes in, among them: lowering student debt, criminal justice reform, campaign finance reform, improving the healthcare coverage and costs of the Affordable Care Act (a.k.a. Obamacare), and women’s rights.

In regard to the environment, Clinton has a plan to combat climate change but has been questioned by environmental activists for supporting fracking. She is also in support of the death penalty but claims it should be implemented in exceptional cases.

On June 6, 2016 Clinton was hailed as the presumptive presidential nominee for the Democratic Party and the first woman in the United States’ 240-year history “to top the presidential ticket of a major U.S. political party,” according to the Associated Press. The assessment was based on Clinton winning the support of a combination of pledged delegates and superdelegates needed to win the nomination.

On June 7th, the night of the final Super Tuesday primary, Clinton delivered a speech from the Brooklyn Navy Yard, acknowledging the historic achievement. It was eight years to the day since she had conceded her loss to Barack Obama in the 2008 presidential race.

“Tonight’s victory is not about one person,” Clinton told a crowd of supporters. ”It belongs to generations of women and men who struggled and sacrificed and made this moment possible. In our country, it started right here in New York, a place called Seneca Falls in 1848 where a small but determined group of women and men came together with the idea that women deserved equal rights and they set it forth in something called the Declaration of Sentiments and it was the first time in human history that that kind of declaration occurred. So we all owe so much to those who came before and tonight belongs to all of you.”

Clinton also acknowledged the impact of her Democratic opponent Bernie Sanders’ campaign: “I want to congratulate Senator Sanders for the extraordinary campaign he has run. He’s excited millions of voters, especially young people. And let there be no mistake: Senator Sanders, his campaign, and the vigorous debate that we’ve had—about how to raise incomes, reduce inequality, increase upward mobility—have been very good for the Democratic Party and for America.”

She also addressed the campaign of Republican presidential nominee Donald Trump, whom she called “temperamentally unfit to be President and Commander-in-Chief.” “He’s not just trying to build a wall between America and Mexico; he’s trying to wall off Americans from each other,” she said. “When he says, ‘Let’s make America great again,’ that is code for ‘Let’s take America backwards.’ Back to a time when opportunity and dignity were reserved for some, not all.”

Clinton personalized her rhetoric when she spoke about her mother Dorothy, “the biggest influence in her life,” who died in 2011: “This past Saturday would have been her 97th birthday. She was born on June 4th, 1919 and some of you may know the significance of that date. On the very day my mother was born in Chicago, Congress was passing the 19th amendment to the constitution. That amendment finally gave women the right to vote. And I really wish my mother could be here tonight . . .I wish she could see her daughter become the Democratic party’s nominee.”

In September 2016, The Arizona Republic made a surprising announcement: it was endorsing a Democrat for the first time in its publication’s history. The editorial board’s decision to support Clinton was explained as follows:

“Since ‘The Arizona Republic’ began publication in 1890, we have never endorsed a Democrat over a Republican for president. Never. This reflects a deep philosophical appreciation for conservative ideals and Republican principles.

This year is different.

The 2016 Republican candidate is not conservative and he is not qualified.

That’s why, for the first time in our history, The Arizona Republic will support a Democrat for president.”

The paper’s unprecedented announcement came on the heels of The Cincinnati Enquirer and The Dallas Morning News’ similar decision to break with their longstanding Republican roots by endorsing Clinton over Trump.

Author of books:
It Takes a Village, And Other Lessons Children Teach Us (1996, non-fiction)
Dear Socks, Dear Buddy: Kids’ Letters to the First Pets (1998, children’s book)
An Invitation to the White House: At Home with History (2000, non-fiction)
Living History (2003, autobiography)