Today is the 128th birthday of the writer and journalist Frances Marion.  She was a trailblazer in Hollywood and a trailblazer in journalism.  The world is a better place because she was in it and still feels the loss that she has left.

BEST KNOWN FOR: Screenwriter Frances Marion wrote more than 100 scripts during her career. She won Academy Awards for The Champ and The Big House.

Before Marion moved in Los Angeles in the 1910s, she had worked as a newspaper journalist and as an artist. She arrived during the silent picture era and found work as an assistant to actress Lois Weber. She soon met another actress, the legendary Mary Pickford. The two would become great friends and frequently worked together. By 1917, Marion was on her way to become an established screenwriter with a several writing credits under her belt, including several adaptations of books and plays. She wrote Poor Little Rich Girl and Rebecca of Sunnybrook Farm, both starring Mary Pickford. 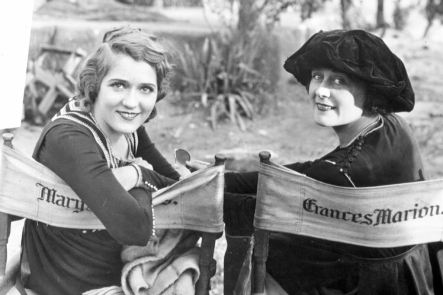 In 1921, Frances Marion directed a film for the first time with Just Around the Corner. That same year, she directed her friend Mary Pickford in one of her own scripts entitled The Love Light. Frances Marion also took over the directorial reins of The Song of Love (1923).

While she had tried her hand at directing, Frances Marion found greater success as a screenwriter in 1920s and 1930s. She wrote the screenplay for the popular tearjerker Stella Dallas (1925) and Son of the Sheik (1926), the final film for screen idol Rudolph Valentino. Marion received the greatest praise for 1930’s The Big House and 1931’s The Champ. For both of these films, she won the Academy Award for Writing. The Champ’s the story of former boxing champion who returns to the ring to improve his son’s life has been remade several times based on her original script. The most recent adaptation was the 1979 film by the same title starring Jon Voight, Faye Dunaway, and Rick Schroder.

Beginning in the late 1930s, Frances Marion shared her talent for writing for the screen with others. She wrote How to Write and Sell Film Stories, which was published in 1937, and later taught screenwriting at the University of South California, Los Angeles. Much later in her life, Marion gave the world an inside look at her experiences in the early days of film with her 1972 autobiography Off with Their Heads.

Married four times, Frances Marion had two children with third husband, actor Fred Thomson. This was her longest marriage, lasting from 1919 until Thomson’s death in 1928. Her fourth marriage to director George Hill was very brief, ending after a year.

Frances Marion died on May 12, 1973. She is remembered for her excellent writing talents, having deftly handling the transition from silent pictures to the talkies??a feat few screenwriters were able to manage.