Today is the 113th birthday of a man considered to be the most popular children’s book writer in American history, the best-selling children’s book writer of all time, and a man who revolutionized the way children learned to read: Theodor Geisel, better known as Dr. Seuss.  I have been obsessed with “The 5,000 Fingers of Dr. T.” since watching it one christmas at my mother’s house.  It is insane.    I am not the only fan, there are legions of them, many honoring him with similarly-rhythmed writing.  What David Rakoff did in his book Love, Dishonor, Marry, Die, Cherish, Perish: A Novel is brilliant.   You can listen to some of it read (it is absolutely best when read by the author) in an episode  for This American Life called “Oh The Places You Won’t Go” (TAL Show #470:  Show Me The Way).   You can listen to it here and I truly wish you would.  The world is a better place because he was in it and still feel the loss that he has left. 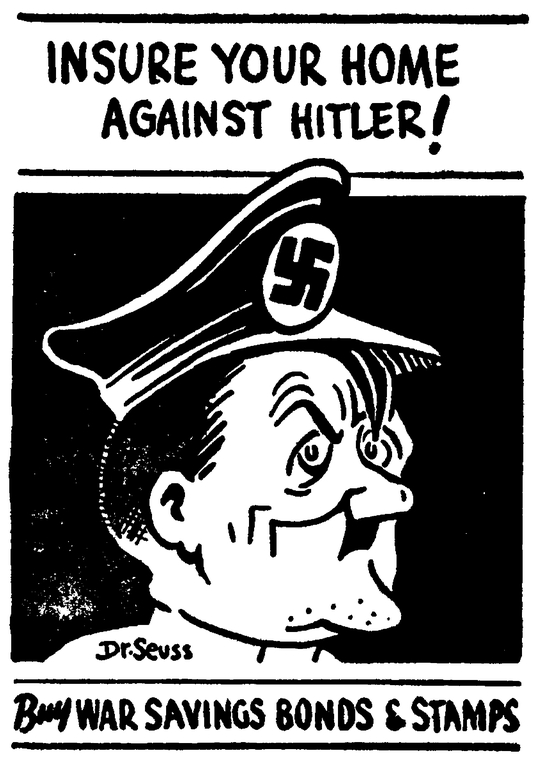 Best Known For:  Throughout his career, cartoonist and writer Dr. Seuss published 60 children’s books, including The Cat in the Hat and Green Eggs and Ham.

“Be who you are and say what you feel, because those who mind don’t matter and those who matter don’t mind.”

He was the grandson of German immigrants, a lifelong Lutheran, a Dartmouth graduate, and an Oxford dropout. His mom was 6 feet tall and 200 pounds, a competitive platform high diver who read him bedtime stories every night. His dad inherited a brewery from his own German immigrant father a month before Prohibition began in the U.S., and eventually became a zookeeper who took young Theodor with him to work. The future Dr. Seuss grew up around the zoo, running around in the cages with baby lions and baby tigers.

At Dartmouth, he majored in English and wrote for the campus humor magazine. But one night he was caught drinking gin with some friends; since this was during Prohibition, it was an illegal act. The Dartmouth administration did not expel him, but as a disciplinary punishment, they did make him resign from all of his extracurricular activities, including the humor magazine, of which he was the editor-in-chief. From then on, he wrote for the magazine subversively, signing his work with his mother’s maiden name, Seuss.

His mother’s family pronounced it “Soise,” the way it’s said in Germany, but people in the States kept mispronouncing it Seuss. He eventually embraced the Anglican mispronunciation: After all, it rhymed with Mother Goose, not a bad thing for an aspiring children’s book writer.

In 1937, he published his first children’s book, And to Think That I Saw It on Mulberry Street, which he said was inspired by the rhythms of a steamliner cruiser he was on. He wrote the book, and much of the rest of his life’s work, in rhyming anapestic meter, also called trisyllabic meter. The meter is very alluring and catchy, and Seuss’s masterful use of it is a big part of why his books are so enjoyable to read. The meter is made up of two weak beats followed by a stressed syllable — da da DUM da da DUM da da DUM da da DUM, as in “And today the Great Yertle, that Marvelous he / Is King of the Mud. That is all he can see.”

A big study came out in the 1950s called “Why Johnny Can’t Read.” It was by an Austrian immigrant to the U.S., an education specialist who argued that the Dick and Jane primers being used to teach reading in grade school classrooms across America were boring and, worse, not an effective method for teaching reading. He called them “horrible, stupid, emasculated, pointless, tasteless little readers,” which went “through dozens and dozens of totally unexciting middle-class, middle-income, middle-IQ children’s activities that offer opportunities for reading ‘Look, look’ or ‘Yes, yes’ or ‘Come, come’ or ‘See the funny, funny animal.'”

William Spaulding, a publisher from Houghton Mifflin’s educational division, thought that maybe a guy named Dr. Seuss, who’d published a few not-well-known but very imaginative children’s books, might be able to write a book that would be really good for teaching kids how to read. He invited Dr. Seuss to dinner and said, “Write me a story that first-graders can’t put down!”

Dr. Seuss spent nine months composing The Cat in the Hat. It uses just 220 different words and is 1,702 words long. He was a meticulous reviser, and he once said: “Writing for children is murder. A chapter has to be boiled down to a paragraph. Every word has to count.”

Within a year of publication, The Cat in the Hat was selling 12,000 copies a month; within five years, it had sold a million copies.