I first watched Some Like It Hot years ago with my mother and sister when it was on PBS. Everything about it was so very cool to me. One of the main things that I fixated on was the sleeper cars on trains, whenever I watched a classic film that had sleeper cars on trains, I thought it was just so very cool and fun. I am not sure why, but it just seemed like a very fun little room to have. Do yourself a favor and watch Some Like It Hot the next time you come across it. You won’t be disappointed. 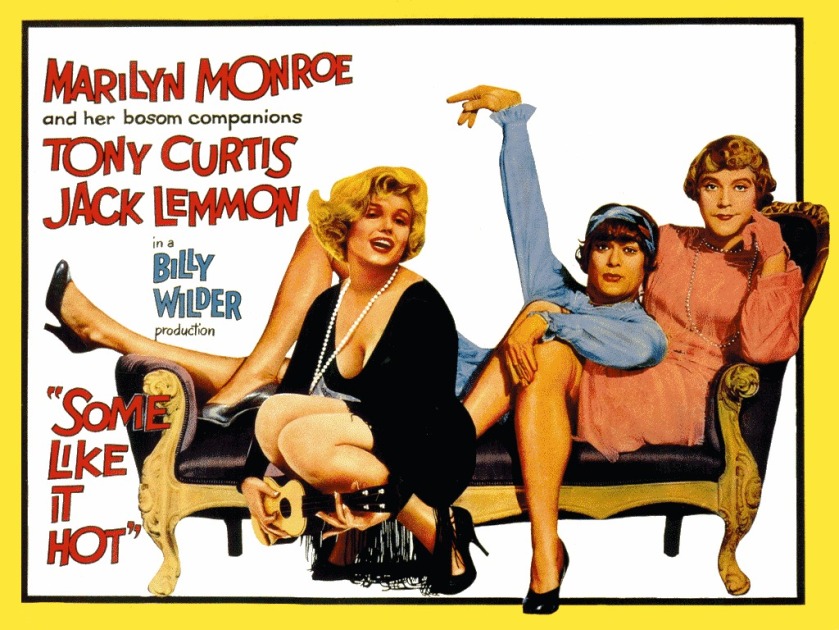 Some Like It Hot is a 1959 American romantic comedy film set in 1929, directed and produced by Billy Wilder, starring Marilyn Monroe, Tony Curtis, and Jack Lemmon. The supporting cast includes George Raft, Pat O’Brien, Joe E. Brown, Joan Shawlee, and Nehemiah Persoff. The plot is based on a screenplay by Billy Wilder and Michael Logan from the French film Fanfare of Love. The film is about two musicians who dress in drag in order to escape from mafia gangsters whom they witnessed commit a crime inspired by the Saint Valentine’s Day Massacre. The film was produced in black and white, even though color films were increasing in popularity.

Some Like It Hot opened to largely positive reviews and is today considered to be one of the greatest film comedies of all time. It was voted as the top comedy film by the American Film Institute on their list on AFI’s 100 Years… 100 Laughs poll in 2000. The film is also notable for featuring cross dressing, and for playing with the idea of homosexuality, which led to it being produced without approval from the Motion Picture Production Code. The code had been gradually weakening in its scope during the early 1950s, due to increasing social tolerance for previously taboo topics in film, but it was still officially enforced. The overwhelming success of Some Like It Hot was a final nail in the coffin for the Hays Code. 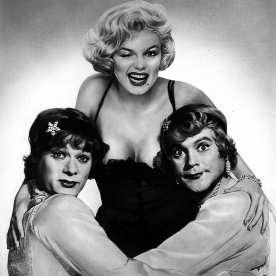 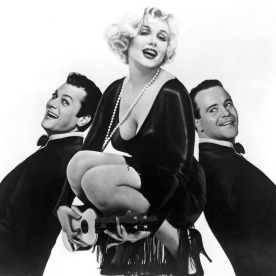 It is February 1929 in the city of Chicago, during the era of prohibition. Joe (Tony Curtis) is an irresponsible jazz saxophone player, gambler and ladies’ man; his friend Jerry (Jack Lemmon) is a sensible jazz double-bass player; both are working in a speakeasy (disguised as a funeral home) owned by mob gangster “Spats” Colombo (George Raft). When the joint is raided by the police after being tipped off by informant “Toothpick” Charlie (George E. Stone), Joe and Jerry flee—only to accidentally witness Spats and his henchmen exacting his revenge on “Toothpick” and his own gang (inspired by the real-life Saint Valentine’s Day Massacre). Penniless and in a mad rush to get out of town, the two musicians take a job with Sweet Sue (Joan Shawlee) and her Society Syncopators, an all-female band headed to Miami. Disguised as women and renaming themselves Josephine and Daphne, they board a train with the band and their male manager, Bienstock. Before they board the train, Joe and Jerry notice Sugar Kane (Marilyn Monroe), the band’s vocalist and ukulele player.

Joe and Jerry become enamored of Sugar and compete for her affection while maintaining their disguises. Sugar confides that she has sworn off male saxophone players, who have stolen her heart in the past and left her with “the fuzzy end of the lollipop”. She has set her sights on finding a sweet, bespectacled millionaire in Florida. During the forbidden drinking and partying on the train, Josephine and Daphne become intimate friends with Sugar, and have to struggle to remember that they are supposed to be girls and cannot make a pass at her.

Once in Miami, Joe woos Sugar by assuming a second disguise as a millionaire named Junior, the heir to Shell Oil, while feigning disinterest in Sugar. An actual millionaire, the much-married aging mama’s boy Osgood Fielding III, (Joe E. Brown) tries repeatedly to pick up Daphne, who rebuffs him. Osgood invites Daphne for a champagne supper on his yacht. Joe convinces Daphne to keep Osgood occupied onshore so that Junior can take Sugar to Osgood’s yacht, passing it off as his. Once on the yacht, Junior explains to Sugar that, due to psychological trauma, he is impotent and frigid, but that he would marry anyone who could change that. Sugar tries to arouse some sexual response in Junior, and begins to succeed. Meanwhile, Daphne and Osgood dance the tango (“La Cumparsita”) till dawn. When Joe and Jerry get back to the hotel, Jerry explains that Osgood has proposed marriage to Daphne and that he, as Daphne, has accepted, anticipating an instant divorce and huge cash settlement when his ruse is revealed. Joe convinces Jerry that he cannot actually marry Osgood.

The hotel hosts a conference for “Friends of Italian Opera”, which is in fact a front for a major meeting of various branches of La Cosa Nostra. Spats and his gang from Chicago recognize Joe and Jerry as the witnesses to the Valentine’s Day murders. Joe and Jerry, fearing for their lives, realize they must quit the band and leave the hotel. Joe breaks Sugar’s heart by telling her that he, Junior, has to marry a woman of his father’s choosing and move to Venezuela. After several chases, Joe and Jerry witness additional mob killings, this time of Spats and his boys. Joe, dressed as Josephine, sees Sugar onstage singing that she will never love again. He kisses her before he leaves, and Sugar realizes that Joe is both Josephine and Junior.

Sugar runs from the stage at the end of her performance and manages to jump into the launch from Osgood’s yacht New Caledonia just as it is leaving the dock with Joe, Jerry, and Osgood. Joe tells Sugar that he is not good enough for her, that she would be getting the “fuzzy end of the lollipop” yet again, but Sugar wants him anyway. Jerry, for his part, comes up with a list of reasons why he and Osgood cannot get married, ranging from a smoking habit to infertility. Osgood dismisses them all; he loves Daphne and is determined to go through with the marriage. Exasperated, Jerry removes his wig and shouts, “I’m a man!” Osgood simply responds, “Well, nobody’s perfect.”