Today is the 84th birthday of the photographer Rene Burri. His iconic images have inspired photographers for years, his philosophy and approach to art inspires me. The world is a better place because he was in it and still feels the loss that he has left.

BEST KNOWN FOR: René Burri was a Swiss photographer known for his photos of major political, historical and cultural events and key figures of the second half of the 20th century.

Burri studied in Zurich, Switzerland at the School of Applied Arts from 1949 to 1953, where he worked under Hans Finsler, Alfred Willimann and Johannes Itten. From 1953 to 1955 he began working as a documentary filmmaker while completing military service. During this time he also began working with Leica cameras. Then he worked for Disney as a cameraman until 1955. From 1956 to 1959 he traveled extensively to places including Turkey, Egypt, Syria, Iraq, Jordan, Lebanon, Italy, France, Spain, Greece, Brazil, and Japan, which led to publications in Life, Look, Stern, Paris-Match, Réalités,Epoca, and New York Times, as well as a photographic essay “El Gaucho” which appeared in Du.

Go and discover for yourself, because the fantastic thing about photography is that you are able to freeze a moment that can never come back.

Burri first began working with Magnum Photos in 1955 through Werner Bischof, becoming a full member in 1959 and being elected chair of Magnum France in 1982. His first report “Touch of Music for the Deaf” on deaf-mute children was published by Life. In 1965 he assisted with the creation of Magnum Films which lead to his work on the Magnum-BBC joint production of, The Two Faces of China. In 1967 he produced a documentary on the Six-Day War in Jerusalem for German television. He produced the film Jean Tinguely in 1972. 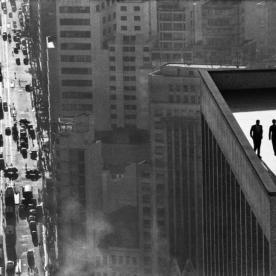 In 1963 Burri was working in Cuba when he was able to photograph the revolutionary Che Guevara; these images of Guevara smoking a cigar have become iconic. Notably, after taking the photos, Burri remembers Guevara “scaring the hell out of him”. Describing a situation where an angry Che was pacing his tiny office like “a caged tiger”, while being interviewed by an American woman from Look. While “hectoring” the reporter and “chomping on his cigar”, Che suddenly looked Burri straight in the eye and told him “if I catch up with your friend Andy, I’ll cut his throat” (while slowly drawing his finger across his neck). Andy was Andrew St. George, a fellow Magnum photographer, who had travelled with Che in the Sierra Maestra, and then later filed reports for American intelligence.

Source: 6 Lessons Rene Burri Can Teach You About Street Photography