Today is the 91st birthday of the actor and comedian Don Rickles. He is quoted as saying “I always pictured myself facing the audience as the matador.” which is easily translated into almost everyone’s life: show up, give them a performance, and dodge the bull. The man was brilliant. The world was a better place because he was in it and still feels the loss that he has left. 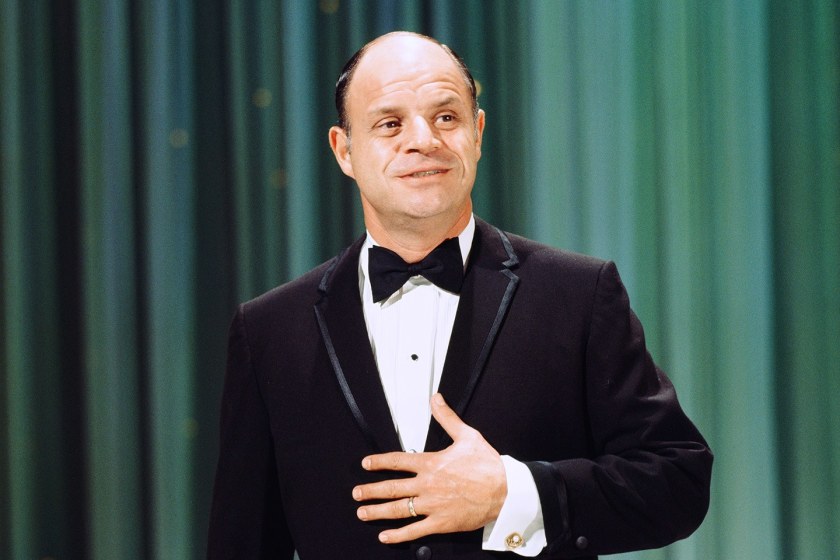 BEST KNOWN FOR: American actor and comic Don Rickles rose to fame in the 1960s through appearances on such programs as ‘The Tonight Show’ and ‘The Dean Martin Show.’

Donald Jay Rickles was born on May 8, 1926, in New York City, New York. The only child of Max, an insurance salesman, and Etta Rickles, he grew up in the Jackson Heights section of Queens, where he was actively involved in the local synagogue.

You know, every night when I go out on stage, there’s always one nagging fear in the back of my mind. I’m always afraid that somewhere out there, there is one person in the audience that I’m not going to offend!

Following his graduation from Newtown High School in 1944, Rickles spent two years in the U.S. Navy. He then attempted to follow in his father’s footsteps as an insurance salesman before enrolling at the American Academy of Dramatic Arts, where his classmates included Jason Robards and Grace Kelly.

Struggling to find roles as a young actor, Rickles took to performing a comedy routine at seedy clubs. Often facing hostile audiences, he began returning fire at his hecklers from the stage, generating the biggest laughs of his performances. He took his act to Miami Beach, where he made a strong impression on Frank Sinatra’s mother, who urged her famous son to help the comedian and soon he was playing Las Vegas, where he prodded the celebrities and other “hockey pucks” who engaged him from the seats. By the end of the 1950s, the fearless comedian was mastering his craft as an “insult comic” in marathon all-night sessions in Las Vegas.

Rickles explored film opportunities, landing roles in features like Run Silent, Run Deep (1958) and The Rabbit Trap (1959) that reflected his training as a dramatic actor. He also began surfacing on television in episodes of The Thin Man, The Twilight Zone and Wagon Train.

By the mid-1960s, Rickles had compiled an extensive list of television credits that included The Addams Family and The Dick Van Dyke Show. He also became known to a wider audience with his roles in Muscle Beach Party (1964) and its sequels.

The comedian pointed to his 1965 debut appearance on The Tonight Show as one of the breakthrough moments of his career. Finding a willing partner in host Johnny Carson, Rickles went on to make more than 100 appearances on the late-night program, providing such memorable segments as the time he snuck in to give Carson a massage.

Rickles enjoyed another career highlight in 1967 with his hilarious guest spot on The Dean Martin Show, immediately earning an invitation to return. He released his first comedy album, Hello, Dummy!, in 1968, and followed with Don Rickles Speaks in 1969.

Along with his appearances on programs like Gilligan’s Island and Get Smart, Rickles landed a major role in the military comedy Kelly’s Heroes (1970). His attempt to headline The Don Rickles Show in 1972 was short lived, but he enjoyed some success from 1976 to 1978 as star of the off-color sitcom C.P.O. Sharkey. He also frequently joined the proceedings of The Dean Martin Celebrity Roast, which provided a perfect showcase for his endearingly biting humor.

By 1980, Rickles’s name recognition was such that he was invited to perform at a fundraiser before British royalty at Grosvenor House in London. True to form, he launched several barbs at guest of honor Princess Margaret, who reportedly enjoyed the razzing. Five years later, Rickles again was tapped to perform before an important audience, this time to needle newly reelected President Ronald Reagan at his second inaugural ball.

Seemingly in danger of becoming an outdated act by the early 1990s, Rickles returned to prominence thanks to an acclaimed performance in Casino and voice work as Mr. Potato Head in the animated smash Toy Story (both 1995). He guest-starred in episodes of The Larry Sanders Show and Murphy Brown, and reprised his Mr. Potato Head character for Toy Story 2 (1999). In 2000, he received a star on the Hollywood Walk of Fame.

In 2007, the legendary comedian was the subject of the Emmy Award-winning documentary Mr. Warmth: The Don Rickles Project. That year he also became an author with Rickles’ Book: A Memoir, an effort that was followed by Rickles’ Letters in 2008. In 2010, he was back in animated form as Mr. Potato Head for Toy Story 3.

Honored with various lifetime achievement awards, Rickles showed no inclination to retire despite his advancing years and the onset of necrotizing fasciitis, a tissue infection. He announced a series of shows with Regis Philbin in 2015 and 2016, and again geared up his voice for production of Toy Story 4, slated for a 2019 release.

Rickles lived in a gated community in Los Angeles, outside Beverly Hills. Married to wife Barbara since 1965, they had a daughter, Mindy, and a son, Larry. Mindy became a stand-up comic, while Larry became a successful producer, until his untimely death from pneumonia at age 41.

The legendary comedian died from kidney failure on April 6, 2017 at his home in Los Angeles. He was 90 years old. Fans and fellow entertainers mourned the loss of the comedy great. He was remembered as a king of insult comedy who off-stage was a sweet and kind man.