Today is the 100th birthday of the actress Susan Hayward.  I love her story, her drive, and her determination.  I know it is a bit kitsch to point out that she is in Valley of the Dolls, but she is brilliant init. The world is a better place because she was in it and still feels the loss that she has left. 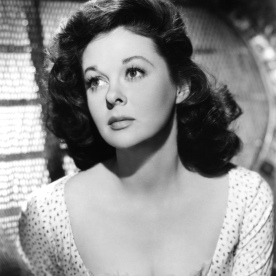 BEST KNOWN FOR: Film actress Susan Hayward earned an Academy Award nomination as Best Actress for her role in Smash-Up, and later won for her performance in I Want to Live.

Born Edythe Marrener on June 30, 1917, to a poverty strickenfamily in Brooklyn, New York, Susan Hayward’s childhood was difficult. She was hit by a car at the age of 7 and stranded at home in a body cast for months. The experience left Hayward with limp and painful memories of a debility she would never forget.

Hayward’s life took an unexpected turn when she was cast as the lead in a school play at age 12. The attention she received quickly turned her into a compulsive star. By 1935, a sexy swagger had replaced Hayward’s childhood limp, and the gorgeous 17-year-old possessed an hourglass figure, a brassy Brooklyn accent and a burning desire for fortune and fame. She began working as a model to help support her family, and when she was featured in the Saturday Evening Post in 1937, all of America was introduced to the red-headed siren from Brooklyn. The same year, David O. Selznick offered Hayward an audition for the part of Scarlett O’Hara in Gone With the Wind. Though her lack of experience took her out of serious consideration, Hayward decided to trade in her return ticket and stay in Hollywood. After signing a contract with Warner Bros., she changed her name to Susan Hayward.

Hayward was driven to succeed as an actress and worked virtually non-stop. Offered the starring role in Smash-Up: The Story of a Woman in 1947, Hayward dazzled both audiences and critics, receiving her first Academy Award nomination as Best Actress. Hayward received four more nominations over the next 12 years, eventually winning for her work in the wildly successful I Want to Live in 1958. Sadly, the actress’s happiness was eclipsed by the death of her husband Eaton Chalkey. And in 1972, just as she was emerging from her despair, she was diagnosed with cancer.

Refusing to surrender to the illness without a fight, Susan Hayward even managed to present the Academy for Best Actress in 1974. On March 14, 1975, at age 57, the irrepressible Brooklyn Bombshell died, leaving behind legions of fans all over the world.