Today is the 187th birthday of the artist Camille Pissarro.  I learned about pointillism in 4th grade when our class would line up for various things in the hallway and my place in line was next to a Seurat print. My teacher pointed out that the entire painting was done with ‘dots’ of paint and after that, I would stare at the painting looking at all the dots and thinking about how it was done. The world is a better place because he was in it and still feels the loss that he has left. 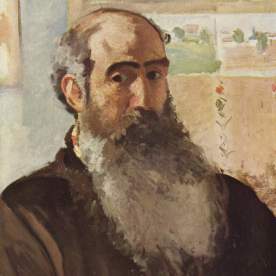 BEST KNOWN FOR: Camille Pissarro was a French landscape artist best known for his influence on Impressionist and Postimpressionist painting.

Jacob-Abraham-Camille Pissarro was born on July 10, 1830, on St. Thomas, in the Danish West Indies. His father was a French citizen of Portuguese Jewish descent, and his mother, who had previously been married to her new husband’s uncle, was Creole. The marriage was controversial, probably due to racial factors, and as a consequence the Pissarro children were compelled to attend the all-black local school rather than the Jewish school.

At the age of 12, Pissarro left St. Thomas to attend boarding school in France. There, he developed an early appreciation of the French art masters. Although he initially pursued a career in business, Pissarro never stopped drawing and painting in his spare time.

In 1852 Pissarro moved to Venezuela with Danish artist Fritz Melbye and lived there until 1855, when he returned to Paris. In Paris, he worked closely with Camille Corot and Gustave Courbet, honing his skills and experimenting with new approaches to art. Pissarro eventually fell in with a group of young artists, including Claude Monet and Paul Cézanne, who shared his interests and questions. The work of these artists was not accepted by the French artistic establishment, which excluded non-traditional painting from the official Salon exhibitions.

In 1871, Pissarro married Julie Vellay, with whom he would have seven children. They lived outside of Paris, where Pissarro painted scenes of village life and the natural world. Like many of his contemporaries, he preferred to work in the open air rather than the studio. The family moved to England during the Franco-Prussian War of 1870–71. Returning to his home in France at the end of the war, Pissarro discovered that the majority of his existing body of work had been destroyed.

Pissarro rebounded quickly from this setback. He soon reconnected with his artist friends, including Cézanne, Monet, Manet, Renoir and Degas. In 1873, Pissarro established a collective of 15 artists with the goal of offering an alternative to the Salon. The following year, the group held their first exhibition, dominated by a style that became known as Impressionism. The unconventional content and style represented in the show shocked critics and helped to define Impressionism as an artistic movement.

By the 1880s, Pissarro moved into a Postimpressionist period, returning to some of his earlier themes and exploring new techniques such as pointillism. He forged new friendships with artists including Georges Seurat and Paul Signac, and was an early admirer of Vincent van Gogh. While in keeping with his lifelong interest in innovation, Pissarro’s turning away from Impressionism contributed to the general decline of the movement, which he had influenced greatly.

In his later years, Pissarro suffered from a recurring eye infection that prevented him from working outdoors during much of the year. As a result of this disability, he often painted while looking out the window of a hotel room. Pissarro died in Paris on November 13, 1903, and is buried in Père Lachaise Cemetery.