Today is the 92nd birthday of the writer Gore Vidal, the man that quipped: 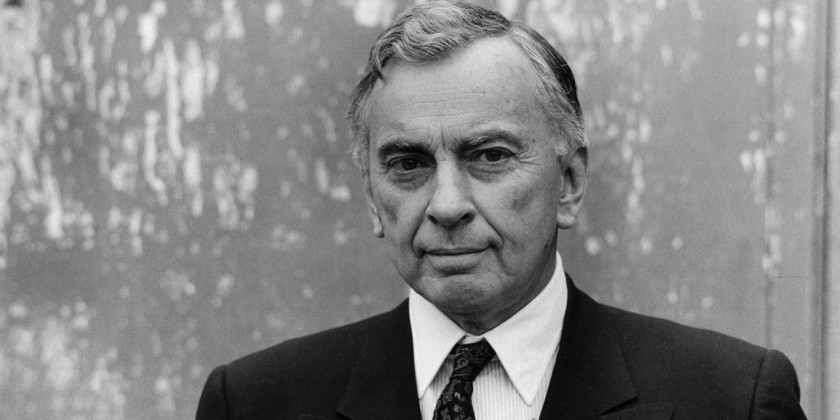 BEST KNOWN FOR: Gore Vidal is best known as a prolific American writer, but is also famous for frequent talk-show appearances and witty political criticisms.

Today is the birthday of Gore Vidal, born Eugene Luther Gore Vidal Jr. at the United States Military Academy at West Point, New York, where his father was an instructor (1925).

He’s well known for his works of historical fiction — such as Julian (1964), Burr (1973), and Lincoln (1984). And his 1968 novel Myra Breckenridge, a satire about a transsexual, was an international best-seller. The New York Times called it “witty”; the reviewer also called it “repulsive” and “a funny novel, but it requires an iron stomach.” Vidal carried a grudge against the Times for the rest of his life.

A narcissist is someone better looking than you are.

In the mid-1950s he branched out even further, writing a series of potboiler mysteries under the pen name “Edgar Box.” He also produced 20 dramas and literary adaptations for television. He adapted one of his original teleplays, Visit to a Small Planet (1955), for the stage, and it became a hit on Broadway; he also wrote several original and adapted screenplays in Hollywood. Near the end of his life, he announced that he’d given up the long-form novel, preferring to focus on nonfiction. He wrote two memoirs (Palimpsest in 1995 and Point to Point Navigation in 2006), and several book-length essays on American history and politics.

Vidal died of pneumonia two months ago, at the age of 86. His old sparring partner The New York Times published a long obituary in his honor, but it contained three errors that required correction.