Today is the 122nd birthday of the actor (and my personal style icon) Buster Keaton.  I absolutely adore his expressionlessness in everything.  And then, have you seen Sunset Boulevard?  I have put the clip below.  So great.  Like a neglected old friend, I sometimes feel like I am not paying enough attention to his films, like I need to keep them closer.  The world is a better place because he was in it and still feels the loss that he has left.

BEST KNOWN FOR: Comedian and director Buster Keaton was popular for his pioneering silent comedies in the 1920s.

Actor, director. Considered one of the groundbreaking comedians of the early film era, Joseph Frank Keaton IV was born October 4, 1895 in Piqua, Kansas. His parents, Joe and Myra, were both veteran vaudevillian actors and Keaton himself first began performing at the age of three when he was incorporated into their act.

As legend has it, he earned the name of “Buster” at the age of six months, after falling down a flight of stairs. Magician Harry Houdini scooped up the child and turning to the boy’s parents quipped, “What a buster.”

Keaton quickly grew used to being knocked around a bit. Working with his parents in an act that prided itself on being as rough as it was funny, Keaton was tossed around by his father frequently. During these performances Keaton would learn to display the deadpan look that would later become a hallmark of his comedy career. 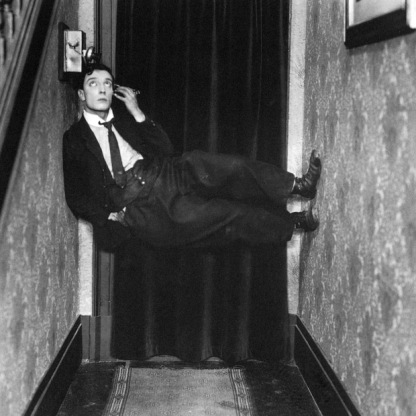 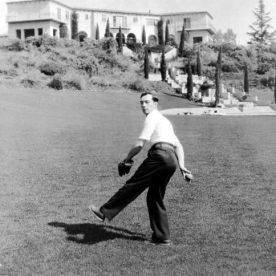 “It was the roughest knockout act that was ever in the history of the theater,” he later said of the performances he did with his parents.

Even in Keaton’s first film, a 1917 two-reeler called “The Butcher Boy” starring Roscoe (“Fatty”) Arbuckle, Keaton was extreme slapstick, with the young actor getting subjected to range of abuses, from being submerged in molasses to getting bit by a dog.

Still, film called to Keaton and for the next two years he continued to work closely with Arbuckle for $40 a week. It was an apprenticeship of sorts and through it, Keaton was given full access to the movie making process.

In 1920 Keaton struck out on his own as a filmmaker, first with a series of two-reelers that included now classics such as The Cameraman, Steamboat Bill, Jr., and The Passionate Plumber. In 1923 Keaton started making full features such as The Three Ages (1923) and Sherlock, Jr. (1924). The line up also included perhaps his finest creation, The General (1927), which starred Keaton as a train engineer in the Civil War. Keaton was the full force behind the film, writing and directing it. But while movie proved initially to be a commercial disappointment it was later hailed as a pioneering piece of filmmaking.

Woven into his films of course, was Keaton’s trademark comedy, brilliant timing and patented facial expressions. In his early two-reelers the laughing making included a mastery of the slapstick pie.

His work also included Keaton’s penchant for doing his own stunts. He became somewhat of a Hollywood legend not just for his falls but his lack of injuries.

At the height of his career, which was in the mid 1920s, Keaton experienced some of the same kind of celebrity as another silent film star, Charlie Chaplin. His salary reached $3,500 a week and he eventually built a $300,000 home in Beverly Hills.

In 1928 Buster Keaton made the move that would later call the mistake of his life. With the advent of talkies, Keaton signed on with MGM, where he proceeded to make a string of new sound comedies that fared decently at the box office but lacked the kind of Keaton punch the filmmaker had come to expect from his work.

The reason for that largely stemmed from the fact that in signing in the deal, Keaton had forked over part of the filmmaking control to his bosses. His life quickly spiraled downward. His marriage to actress Natalie Talmadge, with whom he had two sons, fell apart and he became plagued with issues related to alcoholism and depression.

In 1934, with his contract with MGM now terminated, Keaton filed for bankruptcy. His listed assets totaled just $12,000. One year later he divorced his second wife, Mae Scribbens.

In 1940 Keaton’s life started to move upward again. He got married for a third time, to a 21-year-old dancer named Eleanor Morris, who many credited with bring him stability. The two would remain together until Keaton’s death in 1966.

A return to fame came in the 1950s, a revival that was sparked by British television, where the aging comedian appeared on a string of English programs. In the States, too, American audiences became reacquainted with Keaton after he played himself in Billy Wilder’s Sunset Boulevard (1950) and then in Chaplin’s Limelight (1952).

He also raised his profile through a string of American programs and commercials. In 1956 he was paid $50,000 by Paramount for the film rights to The Keaton Story, which follows the performer’s life from his vaudeville days through his work in Hollywood.

During this time film fans also rediscovered Keaton’s work from the silent film era. In 1962, Keaton, who’d retained full rights to his older films, reissued The General and watched with awe as it drew praise from fans and critics from all over Europe.

In October 1965 the Keaton comeback reached its height after he was invited to the Venice Film Festival, where he showed his latest project, Film, a 22-minute silent movie based on a Samuel Becket screenplay. Keaton had made movie the year before in New York. When the film concluded, Keaton received a five-minute standing ovation from the audience.

“This is the first time I’ve been invited to a film festival,” a teary-eyed Keaton proclaimed. “But I hope it won’t be the last.”

A survivor to the end, the hard working Keaton was, toward the end of his life making more than $100,000 a year just from doing commercials. In all, Keaton, who was honored in 1959 with a special Academy Award, claimed he had more work than he could handle.

Keaton, who suffered from cancer, passed away in his sleep in his home in Hollywood Hills, California, on February 1, 1966.