Today is Veronica Lake’s 95th birthday.  Have you seen The Blue Dahlia?  It is amazing.  Her live story is as heartbreaking as she is beautiful.  The world is a better place because she was in it and still feels the loss that she has left. 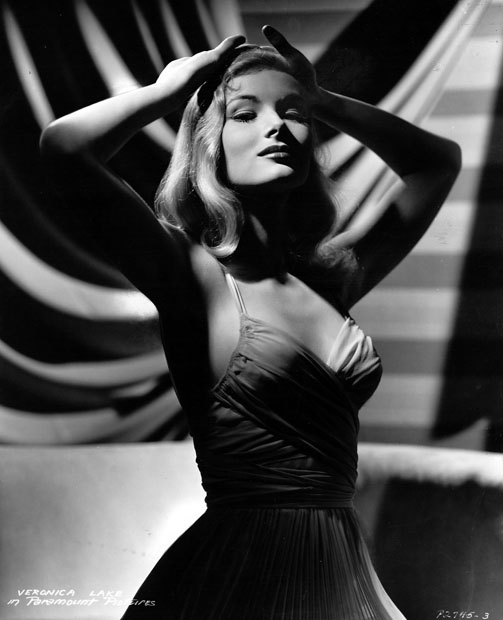 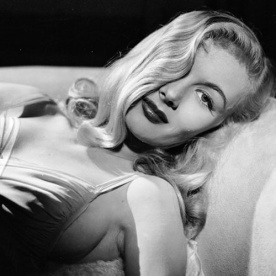 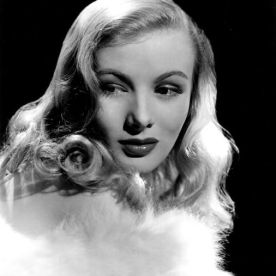 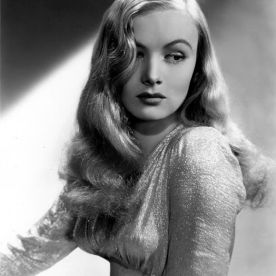 Veronica Lake  was an American film actress and pin-up model. She received both popular and critical acclaim, most notably for her role in Sullivan’s Travels and for her femme fatale roles in film noir with Alan Ladd during the 1940s. She was well-known for her peek-a-boo hairstyle. Lake had a string of broken marriages and, after her career declined, had long struggles with mental illness and alcoholism.

Lake was born Constance Frances Marie Ockelman in Brooklyn, New York. Her father, Harry E. Ockelman, of Danish-Irish descent, worked for an oil company aboard a ship. Her father died in an industrial explosion in Philadelphia in 1932 when she was ten. Her mother, née Constance Charlotta Trimble (1902–1992), (listed as “Veronica F.” on the 1920 census), married family friend Anthony Keane, a newspaper staff artist, a year later, and Lake began using his last name.

Lake was sent to Villa Maria, an all-girls Catholic boarding school in Montreal, Canada, from which she was expelled. The Keane family later moved to Miami, Florida. Lake attended Miami Senior High School in Miami, where she was known for her beauty. She had a troubled childhood and was diagnosed as schizophrenic, according to her mother.

In 1938 Lake moved with her mother and stepfather to Beverly Hills, where her mother enrolled her in the Bliss-Hayden School of Acting. Her first appearance on screen was for RKO, playing a small role among several coeds in the 1939 film, Sorority House. Similar roles followed, including All Women Have Secrets and Dancing Co-Ed. During the making of Sorority House director John Farrow first noticed how her hair always covered her right eye, creating an air of mystery about her and enhancing her natural beauty. She was then introduced, while still a teenager, to the Paramount producer Arthur Hornblow, Jr. He changed her name to Veronica Lake because the surname suited her blue eyes.

RKO subsequently dropped her contract. She married art director John S. Detlie, 14 years her senior, in 1940. A small role in the comedy, Forty Little Mothers, brought unexpected attention. In 1941 she was signed to a long-term contract with Paramount Pictures. On August 21, 1941, she gave birth to her first child, Elaine Detlie.

Her breakthrough film was I Wanted Wings in 1941, a major hit in which Lake played the second female lead and was said to have stolen scene after scene from the rest of the cast. This success was followed by Hold Back the Dawn later that year. She had starring roles in more popular movies, including Sullivan’s Travels, This Gun for Hire, I Married a Witch, The Glass Key, and So Proudly We Hail!. René Clair, the director of I Married a Witch, said of Lake “She was a very gifted girl, but she didn’t believe she was gifted.”

For a short time during the early 1940s Lake was considered one of the most reliable box office draws in Hollywood. She became known for onscreen pairings with actor Alan Ladd. At first, the couple was teamed together merely out of physical necessity: Ladd was just 5 feet 5 inches (1.65 m) tall and the only actress then on the Paramount lot short enough to pair with him was Lake, who stood just 4 feet 111⁄2 inches (1.511 m). They made four films together.

A stray lock of her shoulder-length, blonde hair during a publicity photo shoot led to her iconic “peekaboo” hairstyle, which was widely imitated. During World War II, Lake changed her trademark image to encourage women working in war industry factories to adopt more practical, safer hairstyles, although doing so may have damaged her career.

Although popular with the public, Lake had a complex personality and acquired a reputation for being difficult to work with. Eddie Bracken, her co-star in Star Spangled Rhythm, was quoted as saying, “She was known as ‘The Bitch’ and she deserved the title.”  In that movie, Lake took part in a song lampooning her hair style, “A Sweater, A Sarong and a Peekaboo Bang”, performed with Paulette Goddard and Dorothy Lamour.   Joel McCrea, her co-star in Sullivan’s Travels, reputedly turned down the co-starring role in I Married a Witch, saying, “Life’s too short for two films with Veronica Lake.”

Lake’s career stumbled with her unsympathetic role as Nazi spy Dora Bruckman in 1944’s The Hour Before the Dawn. During filming, she tripped on a lighting cable while pregnant and began hemorrhaging. She recovered, but her second child, William, was born prematurely on July 8, 1943, dying a week later from uremic poisoning.  By the end of 1943 her first marriage ended in divorce. Meanwhile, scathing reviews of The Hour Before Dawn included criticism of her unconvincing German accent.

Nonetheless, Lake was earning $4,500 per week under her contract with Paramount. She had begun drinking more heavily during this period and people began refusing to work with her.  Paramount cast Lake in a string of mostly forgotten films. A notable exception was The Blue Dahlia (1946), in which she again co-starred with Ladd. During filming, screenplay writer Raymond Chandler referred to her as “Moronica Lake”.  Paramount decided not to renew her contract in 1948.

Looking back at her career years later, Lake remarked, “I never did cheesecake; I just used my hair.”

Lake earned her pilot’s license in 1946 and was able to fly solo between Los Angeles and New York.

Lake died on July 7, 1973, of hepatitis and acute renal failure (complications of her alcoholism) in Burlington, Vermont, where her death was certified by Dr. Wareen Beeken at the Fletcher Allen Hospital, and where she was seen by many staff members during her nearly two-week stay. A rumor persists that she died in Montreal and was smuggled across the border to Vermont. Vermont state death records, however, confirm that she died in Burlington, Vermont.

As she requested, her ashes were scattered off the coast of the Virgin Islands. A memorial service was held in Manhattan, but only her son and a handful of strangers attended. In 2004 some of Lake’s ashes were reportedly found in a New York antique store. Her son, Michael, died on February 24, 1991, at age 45 in Olympia, Washington.

Lake has a star on the Hollywood Walk of Fame at 6918 Hollywood Boulevard for her contributions to the motion picture industry. She remains a legendary star today and her autographs and other memorabilia continue to draw high prices on eBay and other popular outlets.

UPDATE:  Recently, a woman claiming to be Amanda Lake, the undocumented daughter of Veronica Lake, has requested that I remove all mention of her “mother” from this site.  Her threats are completely unfounded. Claiming ownership of photographs and the words “Veronica” and “Lake,” she continues to sent lawsuit threats from fake lawyers (emails sent on Sundays from hotmail addresses) and has never once explained exactly what she wants. As far as I can tell, she would like all mention of her “mother” removed from the entire internet. 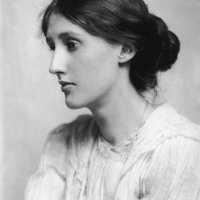 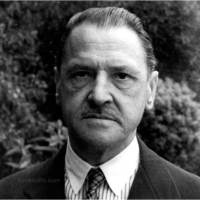