Today is Boris Karloff‘s 130th birthday.  I first learned about him through a book I was reading as a kid called “The Three Investigators Mystery of Terror Castle.”  They are a series of books a lot like the Hardy Boys, but set in the Los Angeles area in the 1940’s.  The Terror Castle one is the first in the series and centers around the mysterious goings-on at the abandoned Hollywood mansion of a silent movie monster actor.  Shortly after reading that book, my mom must have shown me one of his movies and I connected them in my head.  His Hollywood name change was from William Henry Pratt to a more mysterious sounding name to reflect the types of roles he played. It served him well and his nearly 50 year film resume remains as proof. There is an entire season of the You Must Remember This podcast dedicated to Bela Lugosi and him, it is absolutely brilliant. The world is a better place because Boris was in it and still feels the loss that Boris has left.

BEST KNOWN FOR:  Boris Karloff was an English-born actor whose name became synonymous with horror movies.

Actor. Film star Boris Karloff, whose name became synonymous with the horror genre, was born William Henry Pratt in London, England, on November 23, 1887. He studied at London University, then went to Canada and the United States, aiming become a diplomat like his father, and became involved in acting. 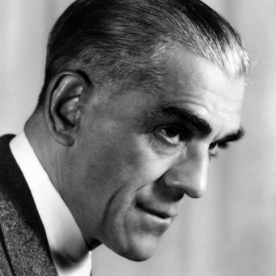 Karloff spent 10 years in repertory companies, went to Hollywood, appearing in forty five silent films for Universal Studios, among them The Last of the Mohicans, Forbidden Cargo and an installment in the popular Tarzan series. When Bela Lugosi refused to take a role in which he would have his face hidden by makeup and have no lines, the role of The Monster in 1931’s Frankenstein went to Karloff. His tender, sympathetic performance received enormous critical praise and he became an overnight sensation.

“The monster was the best friend I ever had.”

Apart from a notable performance in a World War I story, The Lost Patrol (1934), his career was mostly spent in popular horror films. His performances frequently transcended the crudity of the genre, bringing, as in Frankenstein, a depth and pathos to the characterization.

He is also well known for providing the voice to the 1966 cartoon version of How the Grinch Stole Christmas.

Karloff was known within the film industry for his great kindness and gentleness of manner; he was also central to the foundation of the Screen Actors Guild. After battling emphysema for a number of years, Boris Karloff died at his home in England on February 2, 1969.