Today is the 92nd birthday of the actress Julie Harris. Her second film was East of Eden, based on a novel by John Steinbeck and costarring James Dean. Not bad for just out of the gate. She went on to turn in excellent performances in everything. I am a big fan of the film Harper which is partially due to her performance. The world is a better place because she was in it and still feels the loss that she has left.

BEST KNOWN FOR: Film, stage and television actress Julie Harris rose to stardom through her roles in plays like The Member of the Wedding, I Am a Camera and The Lark, as well as movies including East of Eden and The Haunting.

Julie Harris was born in Grosse Pointe, Michigan on December 2, 1925. As a young girl, she loved going to the movies and asked her parents to send her to the Hewitt School, a girls prep school in New York, where she could take drama classes. During her summers, she attended acting camp in Steamboat Springs, Colorado, where she trained with her mentor Charlotte Perry. Perry encouraged Harris to attend the Yale School of Drama, and during her first year there the young actress landed her first Broadway role in the 1945 comedy It’s a Gift.

Harris became a working actress in the 1940s in small roles in shows including King Henry IV, Part 2 and Oedipus, both starring Laurence Olivier, and Macbeth, starring Michael Redgrave. 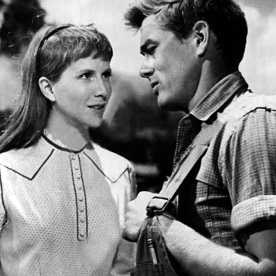 In 1950, the diminutive 24-year-old Harris stepped into the spotlight playing 12-year-old Frankie Adams in Carson McCuller’s stage version of her novel The Member of the Wedding. Her complex performance playing an angst-ridden adolescent launched Harris’ career and earned the actress her first Tony Award. She later reprised her role in the 1952 film adaptation of The Member of the Wedding, directed by Fred Zinneman.

In 1952, Harris also returned to Broadway in a very different role that would earn her rave reviews, playing cabaret singer Sally Bowles in the play I Am a Camera, playwright John van Druten’s stage adaptation of Christopher Isherwood’s novel Goodbye, Berlin. The play became an inspiration for the musical Cabaret.

Harris won her second Tony Award for portraying Joan of Arc in Lillian Hellman’s adaptation of Anouilh’s The Lark, which premiered on Broadway in the fall of 1955. A fan of biographies, Harris was compelled to play real life characters including Mary Todd Lincoln in 1972’s The Last of Mrs. Lincoln, for which she won another Tony Award. And she famously played Emily Dickinson in the 1976 production of The Belle of Amherst, a powerful one-woman show which earned her yet another Tony.

One of Harris’ most commercially successful shows, the 1968 production Forty Carats, earned the actress a Tony for playing an older woman who falls in love with a younger man.

Although she was one of the most respected stage actresses, Harris also received praise for her iconic film roles in movies including East of Eden (1955), Requiem for a Heavyweight (1962) and The Haunting (1963).

On television, from 1981-87 she was known for her role as Lilimae Clements, the mother of Valene Ewing as played by Joan Van Ark in Knots Landing, the popular Dallas soap opera spin-off.

Harris continued to act in her later career, appearing in shows including Driving Miss Daisy and Lettice & Lovage.

In 2001, the actress suffered a stroke which affected her speech, however, she continued to perform. Harris held a Tony Award record for a time with five wins, and in 2002 she was honored with a sixth Tony, a special lifetime achievement award. In 2005 she received a Kennedy Center honor for her illustrious career.

In her personal life, Harris was married three times and had one son, Peter Alston Gurian. Harris died on August 24, 2013 from congestive heart failure at her home in West Chatham, Massachusetts.