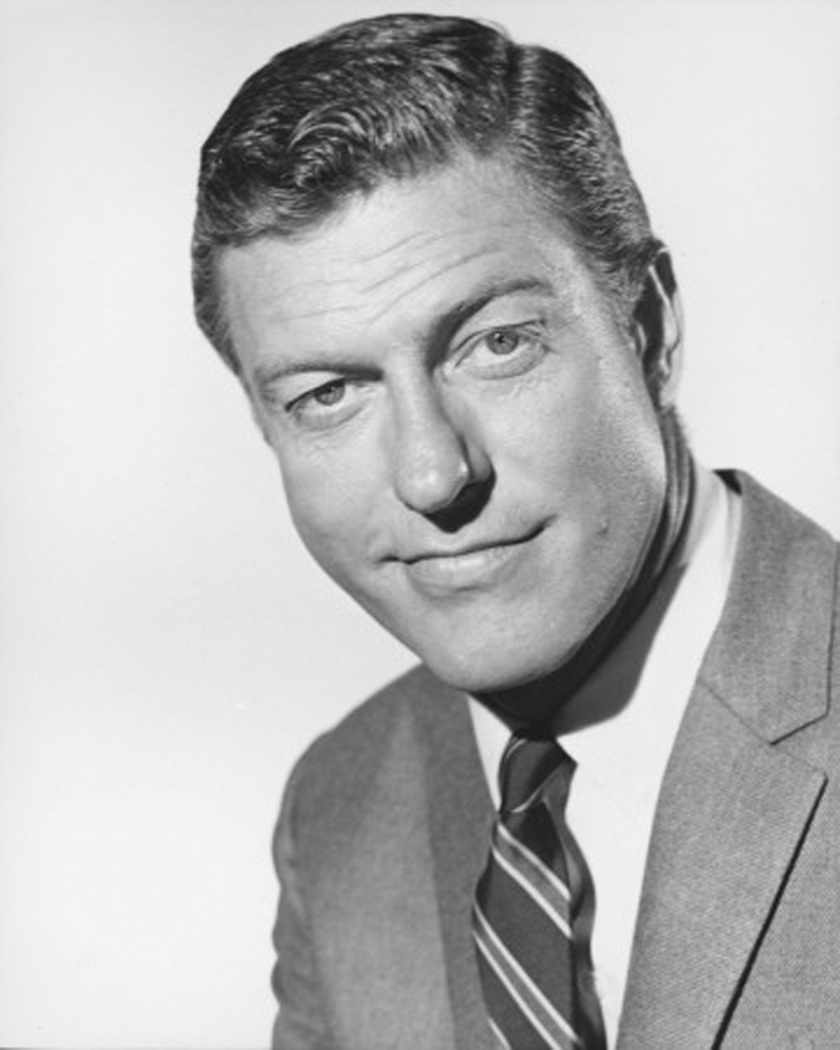 BEST KNOWN FOR: Dick Van Dyke is an American actor and comedian best known for hosting The Dick Van Dyke Show. He’s also known for starring on Diagnosis Murder and for roles in films like Mary Poppins, Dick Tracy and Night at the Museum.

By high school Dick Van Dyke knew he wanted to be on stage, but he was unsure whether he wanted to be an actor or a Presbyterian minister. After a stint in the Army Air Corps, he worked in advertising, then became a radio announcer, and within a few years he was hosting a TV talk show in New Orleans. His big break came when he was hired to replace Johnny Carson as host of CBS’s Monday-Friday The Morning Show in 1955.

The Morning Show was of course flattened in the ratings by Dave Garroway‘s Today Show. After the program was cancelled Van Dyke was still under contract to CBS, but the network was unsure what to do with him. He found himself hosting CBS Cartoon Theater for kids, then playing sidekick to singer Andy Williams in The Chevy Showroom, and he was a frequent panelist on To Tell the Truth while it was on CBS. Van Dyke’s best early reviews came for two appearances onThe Phil Silvers Show in 1957 and 1958.

When his CBS contract ended, Van Dyke hosted two quickly-cancelled game shows, Mother’s Dayand the comedy-themed Laugh Line, which featured regular panelists Mike Nichols and Elaine May. On Broadway, he appeared in the musical review The Girls Against the Boys with an ancientBert Lahr and a young Nancy Walker. The play ran only two weeks, but Van Dyke won a Theater World Award for his performance. In 1960, he won a Tony starring in the hit Bye Bye Birdie, as a rock’n’roll singer drafted into the military.

Meanwhile, unbeknownst to Van Dyke, comedian Carl Reiner had created, written and starred in a pilot for an autobiographical sitcom, Head of the Family. Reiner had scripted comedy for TV pioneer Sid Caesar, and in the pilot he played a comedy writer for a Caesar-like TV star. Network executives liked the script and concept, but thought Reiner was wrong for the role of, basically, himself. So the show was retooled with Van Dyke as comedy writer Rob Petrie, the young Mary Tyler Moore as his wife, Rose Marie and Morey Amsterdam as Van Dyke’s fellow comedy writers, and a small supporting role for Reiner as the Van Dyke character’s obnoxious boss. Of course, Van Dyke was perfect in the role, sometimes tripping over the ottoman and sometimes sidestepping it, as The Dick Van Dyke Show became one of America’s most enduring comedies.

His first film was an adaptation of his Broadway hit Bye Bye Birdie, but with the script rewritten to shortchange his character and instead spotlight Ann-Margret. His most successful film was Mary Poppins with Julie Andrews, but his attempt at a British cockney accent was so awful, the term “Van Dyke accent” is still used to describe failed American attempts to sound British. His other films include The Comic, a drama about comedy with Mickey Rooney; Cold Turkey, a comedy about nicotine withdrawal with Edward Everett Horton; the charming children’s musical Chitty Chitty Bang Bang (based on Ian Fleming‘s non-Bond novel); and Warren Beatty‘s Dick Tracy, where Van Dyke played a delightfully corrupt district attorney.

He made several attempts to recapture the magic of his Dick Van Dyke Show on TV, and occasionally came close. In the early 1970s he starred in The New Dick Van Dyke Show with Hope Lange as his wife, and the program had its moments — most hilariously in an episode where Van Dyke’s character was in a quandary about attending an awards dinner at a whites-only nightclub. He hosted a short-lived variety show in 1976, Van Dyke and Company, with the expected skits and songs, but the show also featured Van Dyke’s endearing and genuinely funny pantomime segments, and provided Americans’ first prime time glimpse of Andy Kaufman, who stole every segment he was in. In the late-1980s comedy The Van Dyke Show, he played a retired Broadway star who amusingly made life miserable for his son, played by Van Dyke’s real-life son Barry Van Dyke.

Van Dyke has often said that his favorite comic was Stan Laurel, and like Laurel he had exquisite timing, an innate likability on-screen, a rubber face, and a mastery of pratfalls and slapstick. Van Dyke rarely wrote his own material while Laurel wrote more than a dozen of Laurel & Hardy‘s best films, but as a performer Van Dyke may have been Laurel’s equal. Van Dyke and Laurel once met, in the early 1960s, while The Dick Van Dyke Show was growing very popular. Shaking his hero’s hand, he told Laurel his work had inspired him, and that he had honed his comedy technique from watching Laurel’s films. According to Van Dyke, Laurel chuckled and said, “I’ve noticed that.”

It is sad, then, that younger audiences probably know Van Dyke only from his last long-running series, Diagnosis: Murder. Abandoning comedy, he played it straight as Dr Mark Sloan, a folksy doctor who solved murders in his spare time. He had first played Sloan in a 1991 episode of Jake and the Fatman, and the character was resurrected in three made-for-TV movies before the series was launched in 1993. A rather stilted clone of Angela Lansbury‘s Murder, She Wrote, Diagnosis: Murder inexplicably ran for eight seasons, co-starring Van Dyke’s son Barry as Dr Sloan’s son Steve, supposedly an LAPD detective.

Van Dyke has spent his recent years in the company of Michelle Triola, who was famous for suing her former lover Lee Marvin, demanding and winning alimony — “palimony” — although they had never married. His brother is comedic actor Jerry Van Dyke, a sitcom staple who starred in the anti-classic My Mother the Car and had a supporting role on Coach with Craig T. Nelson. Van Dyke’s son, as noted above, is wooden actor Barry Van Dyke, whose best-known work withoutsharing the screen with his father was Galactica 1980, a short-lived revival of Battlestar Galacticawith Lorne Greene.