Today is the 80th birthday of the artist Peter Hill Beard. His art is beautiful and has served a dual purpose as a call to African wildlife conservation. He is a life-long journal writer and his tremendous volumes of writing serve as exhibits to a beautifully thoughtful life. The world is a better place because he is in it.

BEST KNOWN FOR: American artist, photographer, diarist and writer who lives and works in New York City and Kenya. His photographs of Africa, African animals and the journals that often integrate his photographs have been widely shown and published since the 1960s.

Born in 1938 in New York City and raised in New York City, Alabama, and Islip, Long Island, Beard began keeping diaries as a young boy and making photographs, as an extension of the diaries, at the age of twelve. A graduate of Pomfret School, he entered Yale University in 1957, with the intention of pursuing pre-med studies, only to switch his major to art history. His mentors at Yale included Josef Albers, Richard Lindner and Vincent Scully.

Inspired by earlier trips to Africa in both 1955 and 1960, Beard traveled to Kenya upon graduation. Working at Tsavo National Park, he photographed and documented the demise of 35,000 elephants and other wildlife, later to become the subject of his first book, “The End of the Game.” During this time, Beard acquired Hog Ranch, a property near the Ngong Hills adjacent to the coffee farm owned by Karen Blixen (Isak Dinesen), which would become his lifelong home-base in East Africa. 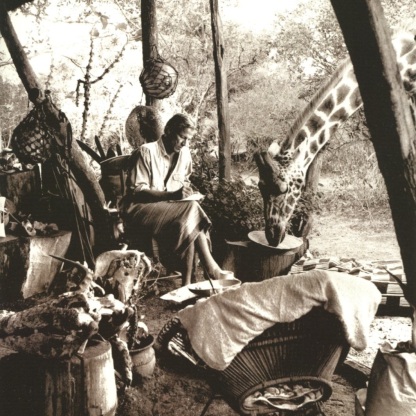 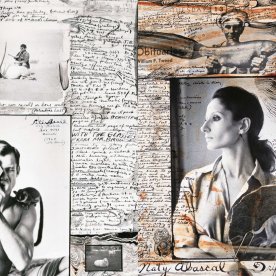 Peter Beard’s photographs of Africa, African animals and journals that often integrate his photographs have been widely shown and published since the 1970s. Each of his works is unique, a combination of his photography with elements derived from his daily diary-keeping, a practice he continues to this day. These volumes contain newspaper clippings, dried leaves, insects, old sepia-toned photos, transcribed telephone messages, marginalia in India ink, photographs of women, quotes, found objects, and the like; these become incorporated, with original drawings and collage by Beard. Certain of his works incorporate animal blood, sometimes Beard’s own blood (in sparing quantities), a painting medium the artist favors.

Beard’s first exhibition was at the Blum Helman Gallery, New York, in 1975. Landmark museum exhibitions have been held at the International Center of Photography, New York, in 1977, and the Centre National de la Photographie, Paris, in 1997. Gallery exhibitions followed in Berlin, London, Toronto, Madrid, Milan, Tokyo and Vienna. Beard’s work is included in private collections throughout the world.

Descended from distinguished American families on both sides, Beard is one of three sons born to Roseanne Hoar Beard and Anson McCook Beard, Jr. A great-grandfather, James Jerome Hill, was founder of the Great Northern Railway in the United States in the late nineteenth/early twentieth centuries. Having made his fortune in the railroad business, James Jerome Hill was a great patron of the arts. All of his heirs were exposed to and owned great collections, presumably having a strong influence on Beard’s interests in the arts and beauty.

Beard married his first wife (Minnie Cushing Beard Coleman) in 1962; the marriage lasted only briefly. His second wife was supermodel Cheryl Tiegs, from 1982 to 1986. Beard has been married to Nejma Khanum since 1986. The couple has a daughter, Zara, for whom his book, Zara’s Tales, was written.

Beard has befriended and in some cases collaborated with many legendary artists including Andy Warhol, Andrew Wyeth, Francis Bacon, Karen Blixen, Truman Capote, Richard Lindner, and Salvador Dalí. He has also photographed many well-known people.