Today is the 136th birthday of the writer Virginia Woolf. An Edward Albee play, numerous novels and artwork, postage stamps, exhibits, and several contemporary writers all credit her influence. The world is a better place because she was in it and still feels the loss that she has left. 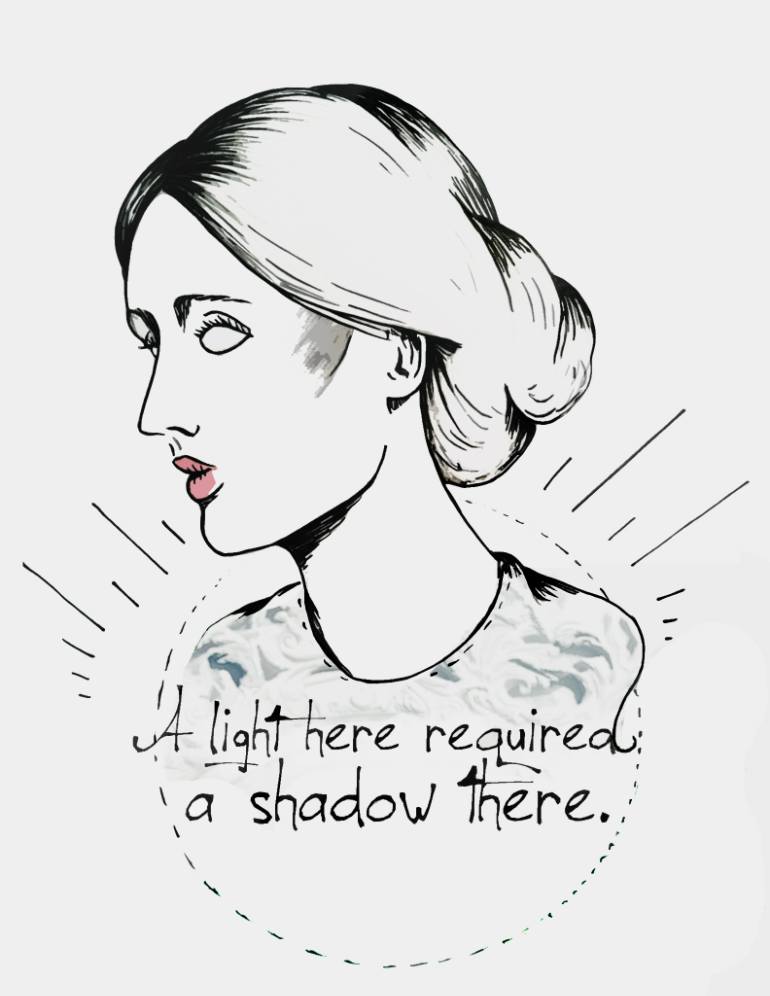 BEST KNOWN FOR: English author Virginia Woolf wrote modernist classics including ‘Mrs. Dalloway’ and ‘To the Lighthouse,’ as well as pioneering feminist texts, ‘A Room of One’s Own’ and ‘Three Guineas.’

Born on January 25, 1882, Adeline Virginia Stephen was raised in a remarkable household. Her father, Sir Leslie Stephen, was a historian and author, as well as one of the most prominent figures in the golden age of mountaineering. Woolf’s mother, Julia Prinsep Stephen (née Jackson), had been born in India and later served as a model for several Pre-Raphaelite painters. She was also a nurse and wrote a book on the profession. Both of her parents had been married and widowed before marrying each other. Woolf had three full siblings — Thoby, Vanessa and Adrian — and four half-siblings — Laura Makepeace Stephen and George, Gerald and Stella Duckworth. The eight children lived under one roof at 22 Hyde Park Gate, Kensington.

Two of Woolf’s brothers had been educated at Cambridge, but all the girls were taught at home and utilized the splendid confines of the family’s lush Victorian library. Moreover, Woolf’s parents were extremely well connected, both socially and artistically. Her father was a friend to William Thackeray, the father of his first wife who died unexpectedly, and George Henry Lewes, as well as many other noted thinkers. Her mother’s aunt was the famous 19th century photographer Julia Margaret Cameron.

From the time of her birth until 1895, Woolf spent her summers in St. Ives, a beach town at the very southwestern tip of England. The Stephens’ summer home, Talland House, which is still standing today, looks out at the dramatic Porthminster Bay and has a view of the Godrevy Lighthouse, which inspired her writing. In her later memoirs, Woolf recalled St. Ives with a great fondness. In fact, she incorporated scenes from those early summers into her modernist novel, To the Lighthouse (1927).

As a young girl, Virginia was curious, light-hearted and playful. She started a family newspaper, the Hyde Park Gate News, to document her family’s humorous anecdotes. However, early traumas darkened her childhood, including being sexually abused by her half-brothers George and Gerald Duckworth, which she wrote about in her essays A Sketch of the Past and 22 Hyde Park Gate. In 1895, at the age of 13, she also had to cope with the sudden death of her mother from rheumatic fever, which led to her first mental breakdown, and the loss of her half-sister Stella, who had become the head of the household, two years later.

While dealing with her personal losses, Woolf continued her studies in German, Greek and Latin at the Ladies’ Department of King’s College London. Her four years of study introduced her to a handful of radical feminists at the helm of educational reforms. In 1904, her father died from stomach cancer, which contributed to another emotional setback that led to Woolf being institutionalized for a brief period. Virginia Woolf’s dance between literary expression and personal desolation would continue for the rest of her life. In 1905, she began writing professionally as a contributor for The Times Literary Supplement. A year later, Woolf’s 26-year-old brother Thoby died from typhoid fever after a family trip to Greece.

After their father’s death, Woolf’s sister Vanessa and brother Adrian sold the family home in Hyde Park Gate, and purchased a house in the Bloomsbury area of London. During this period, Virginia met several members of the Bloomsbury Group, a circle of intellectuals and artists including the art critic Clive Bell, who married Virginia’s sister Vanessa, the novelist E.M. Forster, the painter Duncan Grant, the biographer Lytton Strachey, economist John Maynard Keynes and essayist Leonard Woolf, among others. The group became famous in 1910 for the Dreadnought Hoax, a practical joke in which members of the group dressed up as a delegation of Ethiopian royals, including Virginia disguised as a bearded man, and successfully persuaded the English Royal Navy to show them their warship, the HMS Dreadnought. After the outrageous act, Leonard Woolf and Virginia became closer, and eventually they were married on August 10, 1912. The two shared a passionate love for one another for the rest of their lives.

Several years before marrying Leonard, Virginia had begun working on her first novel. The original title was Melymbrosia. After nine years and innumerable drafts, it was released in 1915 as The Voyage Out. Woolf used the book to experiment with several literary tools, including compelling and unusual narrative perspectives, dream-states and free association prose. Two years later, the Woolfs bought a used printing press and established Hogarth Press, their own publishing house operated out of their home, Hogarth House. Virginia and Leonard published some of their writing, as well as the work of Sigmund Freud, Katharine Mansfield and T.S. Eliot.

A year after the end of World War I, the Woolfs purchased Monk’s House, a cottage in the village of Rodmell in 1919, and that same year Virginia published Night and Day, a novel set in Edwardian England. Her third novel Jacob’s Room was published by Hogarth in 1922. Based on her brother Thoby, it was considered a significant departure from her earlier novels with its modernist elements. That year, she met author, poet and landscape gardener Vita Sackville-West, the wife of English diplomat Harold Nicolson. Virginia and Vita began a friendship that developed into a romantic affair. Although their affair eventually ended, they remained friends until Virginia Woolf’s death.

In 1925, Woolf received rave reviews for Mrs. Dalloway, her fourth novel. The mesmerizing story interweaved interior monologues and raised issues of feminism, mental illness and homosexuality in post-World War I England. Mrs. Dalloway was adapted into a 1997 film, starring Vanessa Redgrave, and inspired The Hours, a 1998 novel by Michael Cunningham and a 2002 film adaptation. Her 1928 novel, To the Lighthouse, was another critical success and considered revolutionary for its stream of consciousness storytelling.The modernist classic examines the subtext of human relationships through the lives of the Ramsay family as they vacation on the Isle of Skye in Scotland.

Woolf found a literary muse in Sackville-West, the inspiration for Woolf’s 1928 novel Orlando, which follows an English nobleman who mysteriously becomes a woman at the age of 30 and lives on for over three centuries of English history. The novel was a breakthrough for Woolf who received critical praise for the groundbreaking work, as well as a newfound level of popularity.

In 1929, Woolf published A Room of One’s Own, a feminist essay based on lectures she had given at women’s colleges, in which she examines women’s role in literature. In the work, she sets forth the idea that “A woman must have money and a room of her own if she is to write fiction.” Woolf pushed narrative boundaries in her next work, The Waves (1931), which she described as “a play-poem” written in the voices of six different characters. Woolf published The Years, the final novel published in her lifetime in 1937, about a family’s history over the course of a generation. The following year she published Three Guineas, an essay which continued the feminist themes of A Room of One’s Own and addressed fascism and war.

Throughout her career, Woolf spoke regularly at colleges and universities, penned dramatic letters, wrote moving essays and self-published a long list of short stories. By her mid-forties, she had established herself as an intellectual, an innovative and influential writer and pioneering feminist. Her ability to balance dream-like scenes with deeply tense plot lines earned her incredible respect from peers and the public alike. Despite her outward success, she continued to regularly suffer from debilitating bouts of depression and dramatic mood swings.

Woolf’s husband, Leonard, always by her side, was quite aware of any signs that pointed to his wife’s descent into depression. He saw, as she was working on what would be her final manuscript, Between the Acts (published posthumously in 1941),that she was sinking into deepening despair. At the time, World War II was raging on and the couple decided if England was invaded by Germany, they would commit suicide together, fearing that Leonard, who was Jewish, would be in particular danger. In 1940, the couple’s London home was destroyed during the Blitz, the Germans bombing of the city.

Unable to cope with her despair, Woolf pulled on her overcoat, filled its pockets with stones and walked into the River Ouse on March 28, 1941. As she waded into the water, the stream took her with it. The authorities found her body three weeks later. Leonard Woolf had her cremated and her remains were scattered at their home, Monk’s House.

Although her popularity decreased after World War II, Woolf’s work resonated again with a new generation of readers during the feminist movement of the 1970s. Woolf remains one of the most influential authors of the 21st century.